A post by Louis A. DeCaro Jr., author of Fire From the Midst of You: The Religious Life of John Brown. Visit his John Brown blog at http://abolitionist-john-brown.blogspot.com/ 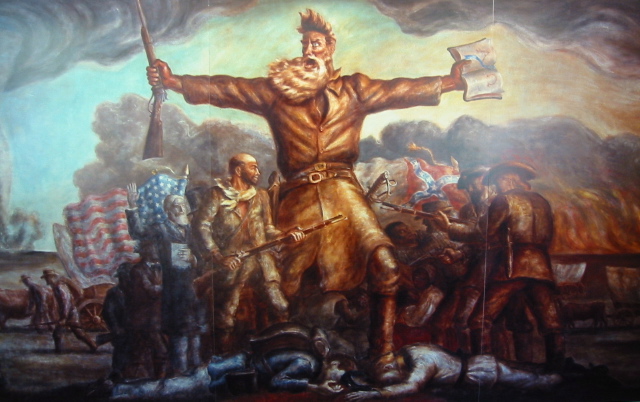 Although U.S. history buffs will readily remind us that 2009 is the bicentennial of Abraham Lincoln’s birth, not a few will also recall that this year is the sesquicentennial of abolitionist John Brown’s raid on Harper’s Ferry and subsequent hanging by the State of Virginia on December 2. Of course Brown is a controversial figure–at least from the standpoint of many white people. Historically, African Americans have seen Brown fundamentally as a positive figure in history. (Indeed, 2009 is also the centennial of W. E. B. DuBois’s renowned biography of Brown, which remains a perennial favorite despite an abundance of errors in detail.) My own book on Brown, “Fire from the Midst of You”: A Religious Life of John Brown (NYU Press, 2002), which was the first biography of the abolitionist in the 21st century, considers Brown’s intimate friendships and alliances with the black community pre-dating the Harper’s Ferry raid by a decade. In other words, black leaders knew Brown as an ally a good many years before most whites knew of him as an anti-slavery figure.

From a biographer’s standpoint, the 20th century largely belonged to Brown’s detractors. Largely informed by the slave masters’ version of the raid as well as the evasive political approach toward Brown typified by Lincoln’s Republican Party, white society inherited a cynical view of Brown as a well-meaning extremist and fanatic. Although this cynicism was counterbalanced for a time by pro-Brown sympathies among influential abolitionist spokesmen, the well of sympathy for Brown dried up toward the end of the 19th century as white society increasingly distanced itself from the concerns of the formerly enslaved African American. Anti-Brown writers in the North and South published exposes and screeds portraying him as a murderer and brigand, and by the mid-20th century historians like Allan Nevins confidently characterized Brown as insane. This negative view was further encouraged by the popular 1940 movie, “Santa Fe Trail,” the screenplay of which was written by a Virginia native who believed the Civil War was avoidable and that Brown was a deluded fanatic and murderer who helped force the nation in the wrong direction of civil war. As I point out in my book, the black community long recognized the popular bias against Brown prevailing among whites. In 1964, Malcolm X put it most succinctly when he alluded to the same movie, saying that whites had made Brown look like a “nut.”

I suspect that the 21st century is going to be friendlier to Brown. Since NYU Press published my biography, a handful of new biographies have been published and despite inevitable differences here and there among writers, our basic reading of Brown is at least sympathetic. I would like to think that the reason for this is that we have made some progress in our cultural self-awareness and in being more honest about our nation’s history. Hopefully there is also a more serious, in-depth approach to research on Brown than has characterized a lot academic screeds in the past. Despite the realities of systemic racism, progressive scholars are approaching the abolitionist without the baggage of the former century’s prejudices and assumptions. To be sure, there are still many scholars and journalists who assume Brown was either insane or the prototypical “terrorist.” Yet those who have studied him with the most depth tend to put aside such notions as unfounded assumptions. Rather, in an age when terrorism prevails as a theme in our world, we increasingly appreciate the fact that Brown actually may be seen as the prototype of the counter-terrorist, just as he manifested attitudes toward “race” and justice that we now assume. In fact, many of our classic white heroes, such as Thomas Jefferson and Andrew Jackson, may prove to shame and embarrass us when presented along these lines. John Brown may never have his own postage stamp, but there are an increasing number of people who see him as a good man, struggling against a status quo of racism and indifference, who at least tried to make a difference in his generation.

I am still researching and writing on Brown and hope to be doing so for quite some time. Believe it or not, there is yet a great deal of work that can be done because relatively little original research has been done on major themes of his life and work over the past forty years. For instance, a few scholars have begun to question the conventional notion that enslaved blacks did not turn out in support of John Brown at Harper’s Ferry. Historians have long depended upon the foundational reports of northern journalists who were themselves largely informed by southern whites and slave masters. As I have discussed in my book, John Brown–The Cost of Freedom (International Publishers, 2007), there is good reason to believe that local blacks were informed and eager to participate in Brown’s movement, and were bitterly disappointed when Brown failed to move his effort expediently out of Harper’s Ferry and into the mountains as he had intended.

This year there are major events commemorating Brown’s activities from Kansas to Virginia and Lake Placid, New York, where his body lies “moldering in the grave.” It is the John Brown year. I hope some readers will take time to remember him by reading my books and others. The more one gets to know John Brown, the more one will realize that he is still has a vibrant, influential presence in our nation. His soul really is marching on.