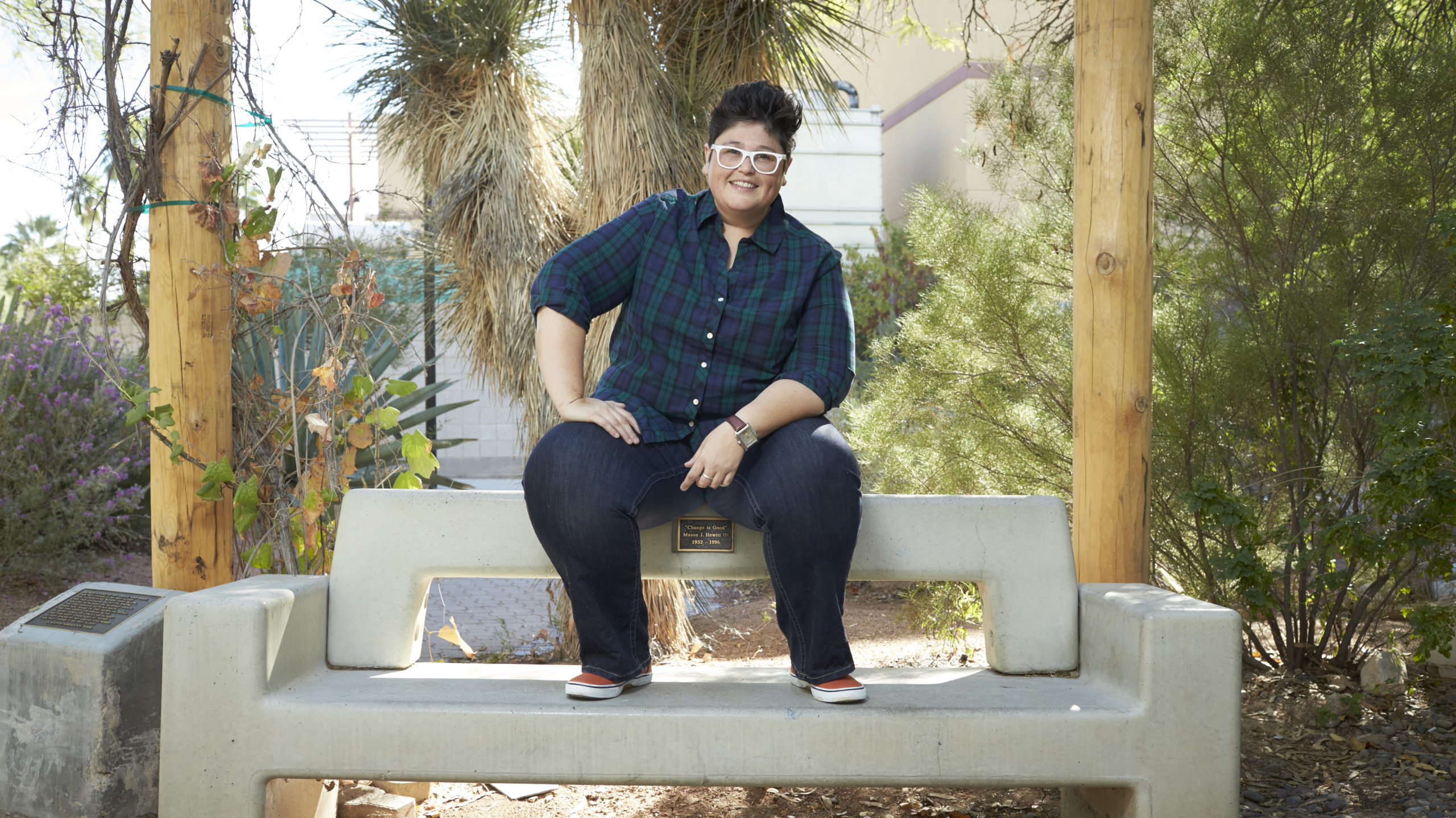 [This originally appeared on IntersexDay.org]

Hello, it’s me, #IntersexyFat. Earlier this year, while my fat and tall intersex body was crunched up in an economy class airplane seat, I decided to let my guard down and publicly claim my fatness on twitter @georgiann_davis.

Surely my fatness was, and continues to be, attributed to both my professional and personal identities—evident in the countless fat shaming comments I hear from people that emerge in unsolicited dieting and workout advice at academic conferences or family dinners, “compliments” by peers about how I am photogenic which, to translate, means I know how to work a camera angle to appear less fat—but I never publicly owned my fatness despite my fatness owning me (almost) every moment of my life.

Unlike my intersex trait, I don’t have the ability to hide my fatness, not that anyone should want to hide being intersex or fat. But I’m also not outside the internalization of the “ideal” body which is real for all of us who are constantly bombarded with its message that the “ideal” body is healthy, able, white, not too thin but definitely not fat, straight, gender conforming, and more. And capitalists around the world profit off of countless products they’ve created, and we buy, to make us think we can get closer to achieving the “ideal” body they’ve helped fuel: skin bleaching creams, diet pills, energy drinks, detox diets, and so much more.

There isn’t a day that goes by that I don’t hate my fat body, not because my fatness directly harms my healthy (it doesn’t—my last physical and lab workup confirmed I am healthy), but because society repeatedly sends a loud message that fatness is unhealthy (wrong) and universally ugly as if attractiveness isn’t subjective. We hear lots of things about fat bodies from all corners in our lives, but rarely do we hear that fatness is profitable. For example, the diet industry is a gold mine, and bariatric surgeons, those who perform gastric bypass procedures, insert lap bands, and more in the United States where I live, have some of the best working conditions across all surgical specialties. They are rarely, if at all, called into the hospital to perform emergency surgeries like their surgical peers in orthopedics, cardiology, or urology. And their office staff don’t have to struggle with insurance reimbursement, as you aren’t even allowed to make an appointment with a bariatric surgeon until you go through months of tedious steps to obtain preapproval from your insurance company—that is if there isn’t a bariatric surgery exclusion in your insurance policy. And for those who don’t have insurance, well, never mind.

For those of you that made it this far reading my reflection, I imagine you might be thinking why is she writing about fatness on intersex awareness day? My reason is three-fold.

First, while flying that afternoon when I came out as #IntersexyFat, I asked myself if it is possible that owning my fatness could positively transform my life in a similar way that being out as intersex has improved the love I have for my intersex body. Is it possible that identifying as fat can assist me in learning to love the fat that surrounds my intersex body?

Second, it was becoming increasingly obvious to me that people I admire and respect for their pursuit of social justice in the world, be it through scholarship and/or activism, regularly perpetuate fatphobia in what they say (or don’t say) and what they do (or don’t do). By calling this out, will my fellow social justice warriors more deeply reflect on their past, present, and future actions?

Lastly, and the focus of my exploration here, aside from the inability to hide my fatness, being intersex and fat aren’t all that different for they overlap in the shadows of the “ideal” body which I will attempt to show below. While I’m still really struggling with my fatness, I’m hoping that I will someday look back on this piece as the beginning of the next chapter of learning to love a part of my body that I continue to hate.

Read the full article on IntersexDay.org

Georgiann Davis is Assistant Professor of Sociology at the University of Nevada, Las Vegas and the author of Contesting Intersex: The Dubious Diagnosis (NYU Press, 2015).