One of our authors, Bernadette Barton, was recently interviewed by Feminists For Choice about her book, Pray the Gay Away: The Extraordinary Lives of Bible Belt Gays  (NYU Press, 2012). Check out an excerpt of the conversation below! 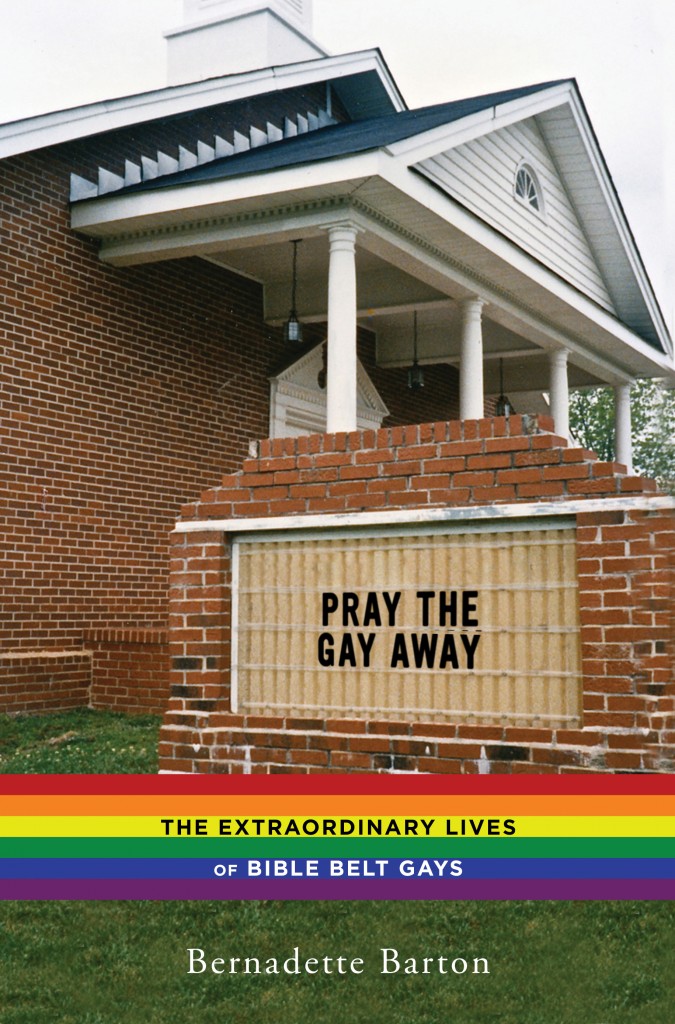 Feminists for Choice: What inspired you to write Pray the Gay Away?
Bernadette Barton: I write about what I call the “abomination incident” in the introduction to Pray the Gay Away. A neighbor told me being gay was an abomination after I came out to him. Although this kind of testifying is relatively commonplace in the Bible Belt, I had never before encountered a stranger who felt entitled to judge me as sinful, and tell me so, based on my sexual orientation. I grew up in Massachusetts in a politically progressive family and was unaccustomed to this kind of interaction. So, even though I had lived in Kentucky for 11 years by this point, I had not experienced much homophobia. My experience as a graduate student at the University of Kentucky, surrounded largely by lesbians, led me to believe that this sort of homophobia had ended.

I was both surprised and troubled by this encounter–the abomination incident–in 2003. Shortly thereafter began the 2004 presidential election season with an anti-gay marriage amendment on the Kentucky ballot. At this point, the homophobic discourse in the public sphere amped up considerably. Marrying a same-sex partner was compared to marrying a dog, horse, child and cousin. Homosexuality was constructed as polluting and contagious. And yard sign and bumper stickers displayed people’s public attitudes about gay people, many of which were in opposition to gay rights.

It became forcefully clear to me that homophobic attitudes and actions were alive, and integral to many people’s understanding of their social worlds. Since I had found my relatively small encounters with stranger homophobia so disturbing, I began to wonder how such attitudes affected gay people who grew up in the region. I was relatively lucky not to negotiate bigoted beliefs directed against my person-ness until I was in my mid-20s. What would it be like, I imagined, to process this kind of condemnation while one’s identity was still forming? Thus, Pray the Gay Away was conceived, and I formally interviewed 59 people from the Bible Belt and have had informal conversations with over 200 others.

FC: Why did you focus on the Bible Belt area specifically?
BB: I focused on the Bible Belt because this region has a number of unique features that affect the lives of gay people. The Bible Belt is, first of all, dominated by people who either actively espouse conservative Christian attitudes about social issues, or defer to those who do. In other words, as I describe in Pray the Gay Away, the Bible Belt is a place of “compulsory Christianity” and those who are not Christian, or not a practicing Christian, or who are socially progressive Christians rarely say so, generally preferring instead to present the appearance of agreeing when they do not (an action called personalism) in order not to offend anyone.

This personalism, a façade of agreeability, is another unique feature of the Bible Belt, compared, for example, to the Northeast. Composed mostly of southern states, the Bible Belt fosters a culture of politeness and direct contradictions of statements of facts or opinions is considered rude. This means that when someone makes bigoted comments about gay people, those present are generally reluctant to challenge such statements for fear of conflict. This sequence of events then supports an overall negative impression of homosexuality, and strongly affects any gay people who might be present.

Finally, though I am originally from the Northeast, and have roots on both the east and west coasts, I have lived in Kentucky for the past 20 years though graduate school and a faculty position. Social norms about religion in the region confused me, so different were they from my own Catholic upbringing. From this seed of confusion, and distress over many homophobic public displays during election seasons (bumper stickers, political ads, and candidate debates) was born a desire to understand the lives of Bible Belt gays. I further believe that the Bible Belt is little understood by those who live in other regions of the United States, and is a place subjected to much stereotyping. I was thus interested in dispelling such myths, and giving voice to a group of people many perceive as simply victims.

[This content originally appeared on Feminists for Choice. Read the entire interview here.]

»»  Happy Pride from NYU Press! Save 25% on Pray the Gay Away (and other select LGBT Studies titles), when you order via our website. Sale ends on July 1, 2013.