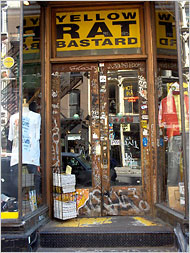 Just one of the many interesting points in the NYTimes City Room review of Graffiti Lives by Greg Snyder:

A provocative map in the book points out that unlike other “quality of life” crimes, graffiti does not tend to be focused in poor neighborhoods with high rates of violent crime. Professor Snyder writes:

Graffiti writers write in order to get fame and respect for their deeds, and therefore they write in places where their work is more likely to be seen by their intended demographic. It is not the amount of disorder that determines a good spot to write graffiti, but the number of potential viewers and the unlikelihood that the graffiti will be painted over. These spots tends to be where young people from all over the city are likely to congregate, and thus the East Village, the Lower East Side, and SoHo are the places where most of the illegal New York City graffiti can be found. These are not poor, crime-ridden neighborhoods.

Indeed, he adds, “Despite all of the negativity associated with graffiti, it remains one of SoHo’s selling points, literally.”

One thought on “Is Graffiti Good for Soho?”