It Can Happen Here: White Power and the Rising Threat of Genocide in the US is an essential new assessment of the dangers of contemporary white power extremism in the United States. We spoke with author Alexander Laban Hinton about the increased visibility of white power extremism under the Trump administration, its similarities to the Khmer Rouge regime, and the ways genocide can be prevented.

How was the Trump presidency a symptom of a long and enduring history of systemic white power in the US?

During his presidency, Trump was continually depicted as an anomaly. People described him as everything from a racist to the second coming of Hitler. While those sorts of characterizations have a grain of truth, they are also dangerous because they misdirect us. If dramatic, Trump’s presidency was continuous with a history of systemic white power that dates back to the origins of this country. In other words, Trump was a symptom of this history, not an aberration.

Who are the white power extremists who suddenly became visible in Trump’s America and how do they fit into the country’s history of systemic white supremacy?

Many people were shocked to see white power extremists suddenly marching in the streets of Charlottesville near the start of the Trump administration in 2017. But they shouldn’t have been. Far-right extremists, including a range of white power groups and militias, have long been active in the U.S. Their origins date back to the beginnings of this country, including the early slave patrols. These groups, perhaps most famously the KKK, sought to enforce white supremacy through extrajudicial means that supplemented the larger formal system of white supremacy. The two are intertwined, of course, as illustrated by how the KKK not just collaborated with police but at times included police and government officials among their ranks.

How did white power views move closer to the mainstream during Trump’s presidency?

From start to finish, Trump brandished white nationalism in a loud and open manner that was the stuff of white power extremist dreams. White power extremists were delighted and celebrated it. Many view themselves as locked in a battle to shift “the narrative” and make their ideas more mainstream and event acceptable. Trump gave them an enormous assist. What was once considered outrageous or taboo became increasingly commonplace, a point underscored regularly on Fox News and even members of the GOP.

You were an expert witness at Khmer Rouge’s Nuon Chea’s trial.  How does Trump, white power extremism in the US, and the Khmer Rouge regime use hate speech and fear mongering in similar ways to achieve their goals?

At the time, in March 2016, Trump was just about to take the lead in the race to become the GOP presidential nominee. As he would throughout his presidency, Trump was already invoking white nationalism themes and racist dog whistles, warning against immigrants and other non-white “threats.” The Khmer Rouge used a very similar strategy of playing on grievance, fear, and hate speech to gain recruits, seize power, and ultimately commit atrocity crimes. I was struck by the parallels at the time and became increasingly alarmed as the parallels continued to grow during the Trump administration. By the time of the election, the alarm bells were ringing. The Capitol Insurrection is bad. But things could have ended up much worse.

Could white supremacists commit a genocide in the US?  What buffers and safeguards are in place to stop this from happening today?

Of course. It has happened here before. It can happen again. I prefer to discuss genocide as one among several possible atrocity crimes, which also encompass crimes against humanity, ethnic cleansing, and war crimes. U.S. history is filled with atrocity crimes committed on U.S. soil and abroad. As I noted before, prevention begins with understanding and acknowledgment. You can’t prevent something you ignore and deny. With understanding and acknowledgment, it becomes possible to move forward with redress as well as the creation of buffers such as education, government training, and even the creation of a domestic atrocity crimes mechanisms of the sort that some other countries have developed. Perhaps this also brings us back to the issue of critical self-awareness, a sort of grassroots prevention mechanism that enables us to speak out in the public sphere in the face of looming atrocity crimes.

How can genocide and atrocity crimes be prevented?  What can we do as individuals and as a society?

After the Holocaust, the world gained a host of new instruments meant to prevent mass human rights violations, including the United Nations, Universal Declaration of Human Rights, and UN Genocide Convention. Today we have international courts, monitoring groups, and doctrines like the responsibility to protect that help prevent atrocity crimes. Each country has its own sets of mechanism to help in the fight to prevent genocide. President Obama was a strong advocate of prevention and helped strengthen related government infrastructures. And, during the Trump administration, Congress passed the Elie Wiesel Genocide and Atrocities Prevention act. What the U.S. has not done such a great job of, however, is grappling with its own past and also setting up official domestic monitoring mechanisms. This is one key way all of us can contribute to the fight to prevent genocide – putting pressure on our government to account for atrocities crimes in our country’s past and establish new mechanisms to prevent them in the future. 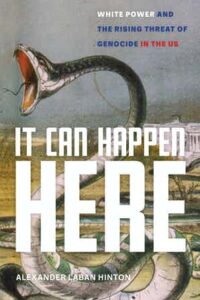 Alexander Laban Hinton is Distinguished Professor of Anthropology, Founder and Director of the Center for the Study of Genocide and Human Rights, and UNESCO Chair on Genocide Prevention at Rutgers University, and the author over a dozen books including the award-winning Why Did They Kill? Cambodia in the Shadow of Genocide. His latest book, It Can Happen Here: White Power and the Rising Threat of Genocide in the US, is now available from NYU Press.