LGBT folks have much to celebrate this Pride season: the repeal of the military policy Don’t Ask, Don’t Tell, marriage equality in New York, the public apology of psychiatrist Robert Spitzer for his flawed findings on ex-gay reparative therapies, and, most thrillingly, President Barack Obama’s support of same-sex marriage. National survey data indicate that U.S. citizens are rapidly becoming more supportive of gay rights—even in Bible Belt red states like Kentucky, where I live.

But with change comes backlash and, sometimes, noisy condemnation. One such example is North Carolina Baptist Pastor Charles Worley, who made news headlines in May 2012 after a YouTube video of one of his sermons went viral. In it, he advocates concentration camps for homosexuals, preaching, “I figured out a way to get rid of all the lesbians and queers. Build a great, big, large fence fifty or a hundred miles long. Put all the lesbians in there. Fly over and drop some food. Do the same thing with the queers and the homosexuals. And have that fence electrified so they can’t get out. And you know what, in a few years they’ll die out. Do you know why? They can’t reproduce.” 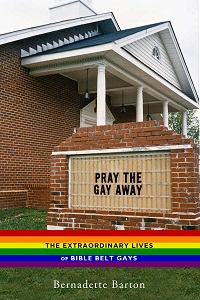 Pastor’s Worley’s homophobic comments, although extreme, reflect the ideologies of some conservative Christians. Those same sentiments emerge in the regional context of what I call in my book, Pray the Gay Away: The Extraordinary Lives of Bible Belt Gays, as “Bible Belt Christianity.” Although there may be much wiggle room amongst individual Christians in their personal relationships with gay people, Bible Belt Christianity encourages both “compulsory Christianity”—communicative exchanges that involve presenting one’s Christian identity to others in routine social interactions—and the framing of homosexuality as sinful.

Fundamentalists like Pastor Worley interpret their beliefs within a total system that allows no shades of gray. For them, homosexuality is unsanctified, and those engaging in same-sex behavior are sinners. Cracking open their belief system a tiny bit to accommodate gay people means the dissolution of their religious structure, and the prospect of facing a great, cavernous unknowing about deep moral questions of good and evil, as well about the afterlife. While most conservative Christians would not promote violence against another person—like putting gay people in concentration camps—most do participate in religious groups that construct the behavior of an entire group of people as an abomination.

It is likely that Pastor Worley’s sermon was partly motivated by the anti-gay marriage amendment on the North Carolina ballot this past May. North Carolina was the latest state to pass an anti-gay marriage ballot amendment, and the last of the Bible Belt states to constitutionally amend one—Kentuckians successfully voted to ban same-sex marriage during the 2004 presidential election season. The Bible Belt gays featured in my book spoke extensively about the heartache and divisiveness caused by anti-gay ballot amendments. For a gay person, seeing political ads, billboards, newspaper op-eds, and lawn signs announcing a homophobic opinion on gay rights is extremely stressful. While an anti-gay lawn sign is not personally directed against any specific individual, running across them is still intimidating and distressing for a gay person, and can be perceived as a justification of homophobic attitudes in those who, like Pastor Worley, hold them. But what has shifted since 2004—and what is deserving of our appreciation this Pride month—is how homophobic comments like those of Pastor Worley are interpreted in public conversations in major media outlets and on social networking sites.

First of all, gay issues are covered today. Every other day it seems—and, sometimes every day—there is a new story on gay rights. Second, homophobic speech, like the sermon Pastor Worley gave, draws much condemnation. Rather than passing it as “business-as-usual, of course it’s disgusting—we don’t even need to talk about it,” people, even in the Bible Belt, are noticing and talking about the injustices gay people face. And, finally, arguments against same-sex marriage—like the ones that the conservative Christian group American Family Association makes about how allowing people of the same sex to marry opens the door for people to marry their dog, horse or cousin—sound even more ludicrous in 2012, because, well, how would a dog sign a legal contract?

Bible Belt gays are uniquely positioned to observe gradual improvements in homophobic attitudes. On the front lines of the culture wars in the United States, Bible Belt gays have hard-won insights to share with gay people from more politically progressive regions of the United States. It’s not only because the lives of Bible Belt gays illustrate the maxim—having endured much, they are stronger for it—but because the personal work required of gay people in the Bible Belt to line up with each other in the face of preachers like Charles Worley makes them more powerful and independent. As Terry, a 29-year-old white lesbian from eastern Kentucky explained, “We speak fundamentalist Christianity. We are interpreters and liaisons. We know that fundamentalists are not crazy. They are wrong. And there is a difference.”

The good part about framing conservative Christians as “wrong” instead of “crazy” is that wrong is more malleable. Pastor Worley may not easily recognize the “wrongness” intrinsic to his belief system, but many other Bible Belt Christians are slowly changing their perceptions of homosexuality. As gay issues continue to get press, as gay people and same-sex relationships are represented in positive ways in the media, as gayness itself becomes more familiar—even for the rural heterosexual who may have never met an openly gay person—we as a culture are getting more used to gay life. And that is something worth celebrating.

Bernadette Barton is Professor of Sociology and Women’s Studies at Morehead State University in Morehead, Kentucky. She is the author Stripped: Inside the Lives of Exotic Dancers (NYU Press, 2006) and Pray the Gay Away: The Extraordinary Lives of Bible Belt Gays, to be released by NYU Press in October 2012.