In his remarkable book The History of the Peloponnesian War, the Greek historian Thucydides, described how the plague of Athens revealed truths about the internal structure of societies and people. Sadly, I have been reminded of Thucydides’ profound reflections when thinking about American jails in a time of pandemic. Developments have revealed how we routinely disregard the lives of those living in our jails. The New York Times recently reported that Chicago’s Cook County Jail has become a major source of Coronavirus infections with hundreds of inmates testing positive for the disease. Similar problems have emerged at Rikers Island in New York City and in jails throughout the nation. Unfortunately, I have been expecting this terrible news because for years, I have been voluntarily teaching philosophy and religion classes to jail and prison inmates and have spent hours learning about the lives of my students.

The Coronavirus has appeared in prisons like New York’s Sing Sing prison and in the Alabama prison system, but it presents a serious challenge in jails. Prisons generally hold a relatively stable population of people that they can carefully monitor. In contrast, jails are often chaotic and overcrowded places with people moving in and out of them. People come into jails bringing various ailments, and often receive minimal health assessments that fail to diagnose their problems. Once they get settled in the jail, they encounter unhealthy circumstances. Sanitary conditions in many US jails are revolting and a breeding ground for diseases. Both staff and inmates lack access to sanitary products and sometimes even to soap and hot water. Inmates often have trouble finding medical care for their problems. When I visited the Cook County jail while doing research for my recent book, I observed inmates living in deplorable conditions. In one part of the jail, hundreds of people occupied the same room. Staff members made frequent contact with inmates, often interacting with them in a personal manner. Such situations make a mockery of the idea “social distancing” in a jail.

Some authorities around the country have begun realizing that controlling the Coronavirus in a jail is a nightmare. They have desperately begun releasing inmates (Sheriff Thomas Dart at Cook County has released hundreds of inmates). This is obviously wise, but at the same time states and municipalities have delayed trials, forcing many inmates to remain in jail longer than they should. These contradictory policies point to the inequities of our jail system, which incarcerates many poor people simply because they cannot pay for bail. Jails do incapacitate dangerous people. However, they also irrationally and unjustly contain thousands of poor people who could be released without a threat to public safety. How can we morally justify exposing such people to a potentially fatal disease? No one should ever be exposed to diseases while incarcerated, but we need to recall that most people in jails are pretrial and have received no legal punishment at all. No ethical theory of punishment could possibly justify exposing them to infection. Moreover, even if we release them, have all those released been tested for Coronavirus before leaving the jail? Where do they go after their release and how will they receive needed medical attention? Jail incarceration deeply affects families in our society, and it is unconscionable to put them at risk because their loved ones have been exposed to the virus in jail.

The recent release of inmates has revealed what is possible and what is difficult in changing our jail system. We need not detain so many people simply because of their incapacity to pay bail. Before the Coronavirus, many municipalities were experimenting with changing their bail systems. New Jersey eliminated the unjust cash bail system almost entirely. Our current crisis suggests that more of these changes are in order. We face a more difficult challenge in helping those suffering from mental illness in our jails. Jails function as places of last resort for those suffering from mental illness. Unable to find care for their illness, bereft of family support or incapable of functioning with illness, countless people commit minor offenses and find themselves trapped in our jail system. As many penal authorities know from difficult experience, jail is no place for those suffering from severe mental illness. Receiving inadequate medication, brutalized by other inmates and staff and incapable of following orders, they often find themselves in solitary confinement, where their conditions can worsen. How we care for such persons with dignity remains a difficult problem that we have yet to fully understand.

A colleague recently told me that in his enforced quarantine, he has read Albert Camus’ famous novel, The Plague. This book has long been taken to be a symbolic discussion of both the Nazi occupation of France and of the human response to suffering. Camus’ work speaks to the hunger many people have to find some meaning in our current pandemic chaos. They speak of returning to a pre-virus “normal,” yet recognize that this virus has revealed deep problems in this normality. Once we can leave our homes and interact, we should critically interrogate some elements of pre-virus life. Perhaps one lesson we can learn from this virus is that we must stop devaluing the lives of hundreds of thousands of people in our troubled jails. It is sad that it has taken a concern about for our own safety to draw attention to a terrible problem in our society. Nevertheless, it is now a matter of public concern, and I welcome this new-found recognition of the injustice of our jail system. 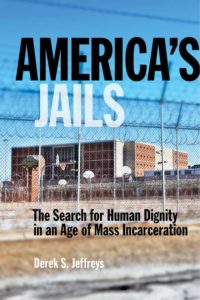 Derek S. Jeffreys is Professor of Humanities Studies and Religion at the University of Wisconsin, Green Bay. His work focuses on ethics and violence, and he has written books on Pope John Paul II, ethics and solitary confinement and ethics and torture. He is the author of America’s Jails: The Search for Human Dignity in an Age of Mass Incarceration.

Feature Image by Ichigo121212 from Pixabay.