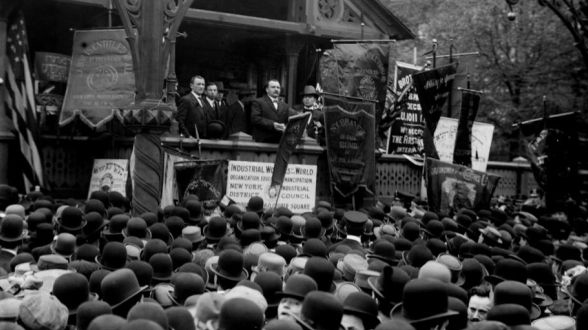 One of the many pleasures of researching a history of New York’s Irish and Italians was encountering the revolutionary heroes from both homelands who occasionally crossed the city’s stage.

Among the Italians, the greatest was Giuseppe Garibaldi, who lived for a time on Staten Island. Among the most memorable of the Irish visitors is the socialist James Connolly, who is being remembered this weekend as the centennial of the 1916 Easter Rising is marked.

Connolly, one of the leaders of the revolt against British rule of Ireland, was executed by firing squad for his leadership role in the fighting that began in Dublin on Easter Monday of 1916.

Connolly lived in the United States from 1902 to 1910, with the exception of a few months spent back in Ireland. He was known well enough that upon his arrival by steamship the New York Times carried a brief item headlined, “Agitator Connolly Here.”

His first event in New York followed on September 15, 1902, the day after his arrival. Connolly spoke at Cooper Union (a few blocks from the office of NYU Press), and the New York Tribune said the meeting “was largely attended, and everything that Connolly said was loudly applauded.”

Connolly traveled the country speaking in behalf of the Socialist Labor Party and then returned to New York. “He is a clear and forcible writer and has the native eloquence of his race,” the Minneapolis Journal reported on October 31, 1902.

Unable to find work upon his return to New York, he moved to Troy, N.Y. and then to Newark, N.J., where he got a job with the Singer Sewing Machine Co.

He made an impression on the young Elizabeth Gurley Flynn when they met while trying to organize Italian immigrant workers. She was surprised in 1907 when he was able to address the workers in Italian at a meeting in Newark.

The New York Tribune of July 19, 1908 reports that Connolly wooed Irish Americans at an event held at 749 Third Avenue in Manhattan (which was the office of a newspaper he put out, The Harp). A statement was issued saying that while the Democrats had won Irish favor in the mid-19th century by opposing the Know-Nothing movement, the Democratic Party was now “going down to an unhonored grave because of the inability to grasp the problems of your own time … We must fight against that in America which plundered and hunted us in Ireland” – Connolly’s call to reject capitalism.

Connolly preferred his Irish socialist crowd to the American socialists he met, and was uncomfortable with what he viewed as American individualism. He returned to Ireland to find his fate.

Paul Moses is Professor of Journalism at Brooklyn College/CUNY and former city editor of Newsday, where he was the lead writer for a team that won the Pulitzer Prize. He is author of An Unlikely Union: The Love-Hate Story of New York’s Irish and Italians (NYU Press, 2015).

Feature image: James Connolly addressing the masses in Union Square on May Day in 1908. Photo: Library of Congress.