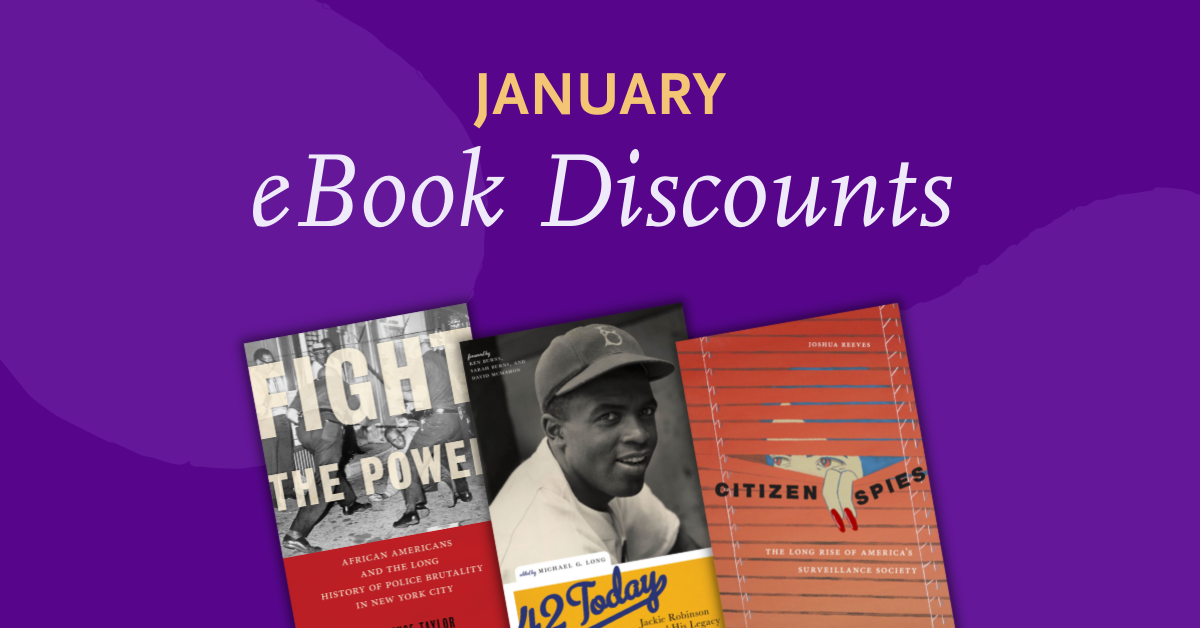 For Martin Luther King Jr. Day on January 17 and Data Privacy Day on January 28, NYU Press presents January eBook deals to inform and educate readers on these important topics. You can purchase any eBook below for just $1.99!

Jackie Robinson and His Legacy

Explore baseball legend Jackie Robinson’s compelling (and complicated) legacy. Featuring piercing essays from a range of distinguished sportswriters, cultural critics, and scholars, this book explores Robinson’s perspectives and legacies on civil rights, sports, faith, youth, and nonviolence, while providing rare glimpses into the struggles and strength of one of the nation’s most athletically gifted and politically significant citizens.

In Avidly Reads Passages, Michelle D. Commander plies four freighted modes of travel—the slave ship, train, automobile, and bus—to map the mobility of her ancestors over the past five centuries. In the process, she refreshes the conventional American travel narrative by telling an urgent story about how history shapes what moves us, as well as what prevents so many Black Americans from moving or being moved.

With a singular blend of personal reflection and cultural criticism, Avidly Reads Passages offers a unique lens through which to capture the intricacies of Black life.

A story of resistance, power and politics as revealed through New York City’s complex history of police brutality.

Fight the Power examines the explosive history of police brutality in New York City and the black community’s long struggle to resist it. Taylor brings this story to life by exploring the institutions and the people that waged campaigns to end the mistreatment of people of color at the hands of the police, including the black church, the black press, black communists and civil rights activists.

Against Wind and Tide

The African American Struggle Against the Colonization Movement

A compelling look at the African American struggle against the Colonization Movement.

Against Wind and Tide tells the story of African American’s battle against the American Colonization Society (ACS), founded in 1816 with the intention to return free blacks to its colony Liberia. Although ACS members considered free black colonization in Africa a benevolent enterprise, most black leaders rejected the ACS, fearing that the organization sought forced removal. As Ousmane K. Power-Greene’s story shows, these African American anticolonizationists did not believe Liberia would ever be a true “black American homeland.”

Tells the riveting narrative of the growth, disappearance, and eventual rediscovery of one of the largest free black communities of the nineteenth century.

Weeksville was founded by African American entrepreneurs after slavery ended in New York State in 1827. Located in eastern Brooklyn, Weeksville provided a space of physical safety, economic prosperity, education, and even political power for its black population, who organized churches, a school, orphan asylum, home for the aged, newspapers, and the national African Civilization Society.

The Rise of Big Data Policing

Surveillance, Race, and the Future of Law Enforcement

An examination of algorithm-driven policing, and its impact on law enforcement.

This first book on big data policing offers an examination of how new technologies will alter the who, where, when and how of police work. These technologies offer data-driven methods to improve police accountability and to remedy the underlying socioeconomic risk factors that encourage crime.

A must read for anyone concerned with how technology will revolutionize law enforcement and its potential threat to the security, privacy, and constitutional rights of citizens.

A much-needed perspective for those interested in how we arrived at our current moment in surveillance culture and contextualizes contemporary trends in policing.

Ever since the revelations of whistleblower Edward Snowden, we think about surveillance as data-tracking technologies used by Google, the NSA, and the military. But, in reality, the state and allied institutions have a much longer history of using everyday citizens to spy on their peers. Citizen Spies shows how “If You See Something, Say Something” has been an essential civic responsibility throughout the history of the United States.

January eBook deals valid good through January 31, 2022, only available through US retailers.