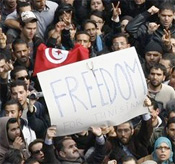 With protests against authoritarian rule in Tunisia leading to the establishment of a fragile, new coalition government, we were looking to see what NYU Press has that applies. While there are several great books about conflicts against overbearing governments, we have only one book that takes a long look at Tunisia, Michael Laskier’s 1997 book North African Jewry in the Twentieth Century: The Jews of Morocco, Tunisia, and Algeria

. It’s a fascinating look at the religious dynamics in the region throughout the 20th century, and recommended for anyone who wants a full picture of the region’s history. Most interestingly, Tunisian Jews form distinct communities in Israel and Canada, and their impact on politics there and in North Africa is still felt.