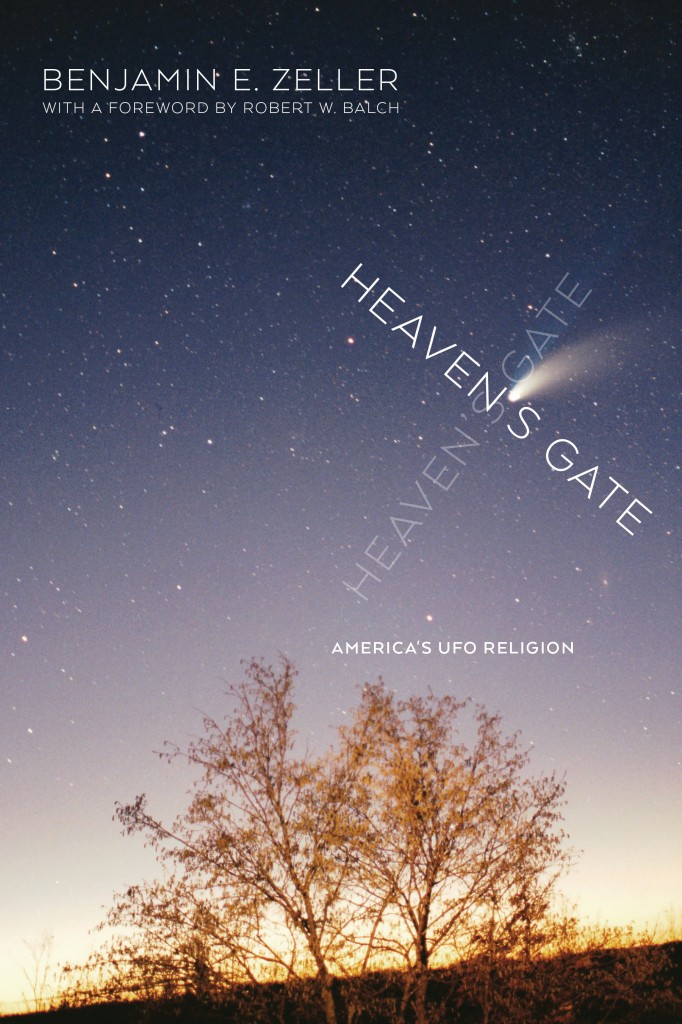 This past week I’ve been forwarded links to Ashley Feinberg’s essay on Heaven’s Gate, “The Online Legacy of a Suicide Cult and the Webmasters Who Stayed Behind.” As the now go-to expert on Heaven’s Gate—an honor I share with colleagues Robert Balch and George Chryssides—friends, family, and colleagues have reached out, asking for my opinion on the piece. Having now digested Feinberg’s essay, here’s my summary: Feinberg mostly got it right, though she has fallen into several traps of overgeneralization. She has done a good job of showing how Heaven’s Gate’s activities on the internet unfolded at the end of the movement’s history, but there is more to this story.

In terms of the facts, Feinberg has it mostly right, or at least as close as possible. For example, on the pivotal 1972 meeting between co-founders Marshall Herff Applewhite (1932–1997) and Bonnie Lu Nettles (1927–1985), Feinberg indicates that a heart attack had led Applewhite to be admitted to the hospital where Nettles worked, a position Applewhite’s sister also took. Applewhite himself said he was visiting a friend, and this is Balch’s position as well. Regardless, this is one fact we’ll probably never know.

Feinberg also misread how and when Heaven’s Gate’s became increasingly reclusive and monastic in orientation. Feinberg traces this to “the years after Ti’s [i.e., Nettles’s] death” in 1985. In fact, it was Nettles herself who called for the “closing of the harvest” on April 21, 1976, which led to her and Applewhite shifting the group towards more insular, strict living over the following months. Interviews with ex-members and an analysis of the sources show that both the insularity and the puritanical model of life did not change much after Nettles’s death, though as Feinberg rightly pointed out, other theological shifts did occur.

But this really amounts to quibbles. Overall, Feinberg has done a good job of unpacking the history of a complicated group. (If I may be permitted a moment of self-reflection, it took me years to trace and retrace the early history of Heaven’s Gate, an effort I distilled into the first chapter of my forthcoming book.)

Feinberg’s assessment of the sociology of the group was also spot-on. Here she did her homework, interviewing Balch, who spent the most amount of time studying the group during its existence. Her conclusions are correct that ex-members usually left on good terms because they were supported by Nettles and Applewhite in doing so, but that those who were deeply committed would find this difficult to actually do. One emendation: the movement in fact experienced massive defection rates over the years. Numbers are hard to pin down, but the group went from several hundred at its heyday to thirty-nine at its terminus.

Regarding their theology, Feinberg has unfortunately fallen into the trap of assuming that, in her words, “[t]he Heaven’s Gate doctrine in its entirety is convoluted and, unsurprisingly, not all that consistent” and that “for all the hundreds of pages of sermons and prophecies and transcripts held within the site and its advertised wares, the bizarre, often incoherent text really doesn’t tell you all that much.” Here Feinberg repeats the oft-seen trope of presupposing that a group labeled a cult must ipso facto have an incoherent or inconsistent doctrine. In fact, Heaven’s Gate’s religious worldview was quite coherent and consistent, though like any living religious community, different members possessed their own perspectives and positions, and the teachings of the two founders and leaders also shifted over time as they responded to changes both internal and external. It was also exceedingly well documented in hundreds of pages of text and dozens of hours of videos.

The religious message of Heaven’s Gate boiled down to this: Earth existed as a intermediate realm wherein individuals could experience growth and, with the proper effort and instruction, be given the chance to transcend this existence and be reborn into a new eternal life of perfection in the heavens. At its heart, this is not a radically different message from the typical Christian teachings on of the drama of human life, especially in the forms championed by American Evangelical Protestants. Like such Christians, members of Heaven’s Gate looked to Earth as a battleground between good and evil, but sought to transcend it through cleaving to the teachings and personhood of a heavenly savior. For Christians, that is Christ, the Bible, and the Church. For adherents of Heaven’s Gate, it was Nettles and Applewhite as Ti and Do, their teachings, and their movement.

As I and my colleagues have written, Heaven’s Gate brought together such typical Christian teachings with those of the New Age movement and its emphasis on self-transformation and extraterrestrial wisdom, as well as influences from secular ufology, science fiction, and—towards the end of the movement’s history—the conspiratorial subculture of the American fringe. Here I’ll have to tell you to read the articles or books that my colleagues and I have written to get the longer story, but what Nettles and Applewhite did was careful and considered. They created an internally consistent theology that allowed non-supernaturally oriented American spiritual seekers to find a religious home. It wasn’t formal theology, but it made sense if you accepted their presumptions. (That’s true with most religions, incidentally.)

Feinberg’s essay does an excellent job in the consideration of the group’s internet business, Higher Source. Some of the sample images that members of Heaven’s Gate produced for their business and to which Feinberg links provide visual clues as to how the worldview of Heaven’s Gate had unfolded by the mid-1990s. Kudos to her for bringing the group member’s business work—what adherents disparaged as simply a means to “earn sticks”—to our attention.

But in terms of Heaven’s Gate’s usage of the internet, we need to look earlier than the world wide web to the Usenet, the free-roaming bulletin board system that served as the internet’s front porch before the days of the graphic-based web. Over a yearlong period following September 1995, Applewhite authored several overlapping statements that he or members acting on his behalf posted to Usenet boards ranging from alt.current-events.usa to alt.startrek to comp.ai.philosophy to alt.drugs.psychedelics. As I’ve documented in my forthcoming book, the responses to Applewhite’s posts were uniformly negative. This more than anything else led him and his coreligionists to begin to give up on ever connecting with the people of this planet. If philosophers of Artificial Intelligence and Trekkies did not take Heaven’s Gate seriously, then who would? The movement created its first webpage at the end of this period, published its anthology, issued several videotapes, and basically began to wrap up things here on planet Earth. All it took was the right heavenly marker to show that the time had come to leave. Comet Hale-Bopp did that.

Returning to Feinberg, my biggest critique is this: there is nothing really remarkable about the work of Mrc and Srf (as they prefer to be called) as the continuing webmasters of HeavensGate.com. I say this as someone who has spoken with, interviewed, and spent informal time with Mrc and Srf: one ought to take them at their word when they say, as they did to Feinberg, that they serve as archivists and keepers of the group’s intellectual property. They do this out of deep commitment to the memories and beliefs of several dozen of their close friends with whom they spent over a decade living as a tight-knit family, individuals whose lives and deaths were disparaged and dismissed on national television, and for whom no one is left to speak. I hardly think that I, or anyone reading this, would do otherwise in similar circumstances. Science fiction novelist Orson Scott Card would surely not mind if I borrowed his term: Mrc and Srf are Speakers for the Dead.

A nasty internecine conflict exists over the claims of ownership of the Heaven’s Gate intellectual property. (There are more former members than Feinberg found, as well as other parties involved, but I will not use names here.) I am no lawyer and cannot speak to the claims of ex-members, academics, amateur collectors of cult paraphernalia, and in some cases, my own colleagues and friends, as to who legally or ethically ought to control the legacy of Heaven’s Gate. But here is why it matters, and why it matters that “someone’s there to keep the lights on” for the website, as Feinberg puts it.

When thirty-nine relatively ordinary, sane, unremarkable people decide to end their terrestrial lives for the purposes of seeking transcendence and truth, that is important. When they pen essays, videotape monologues, and issue press releases on their impending deaths, they mean to tell us something. What did they want us to know? I quote Srrody, a member who joined Heaven’s Gate on February 14, 1976 and ended his life with his co-religionists: “Somebody on the other side of the camera…you’ll say ‘you are deluded or you are brainwashed or whatever’…but from my perspective, this is a godsend, this is the answer to everything.”

Hauntingly, members of Heaven’s Gate knew they would not be taken seriously. They knew they would be accused of being brainwashed, of being cultists, of being crazy. The Heaven’s Gate materials exist as testimony to how these thirty-nine individuals wrestled with questions of identity, meaning, and purpose. They show how intelligent, ordinary people sometimes painfully tried to explain what they knew others would dismiss as stupid or strange. The HeavensGate.com website and related contents, in other words, speak to how thirty-nine people lived and died, navigating the same questions and issues that face us all. They were human beings, though they longed with all their hearts not to be. That’s why it matters.

One thought on “Keeping the lights on for Heaven’s Gate”