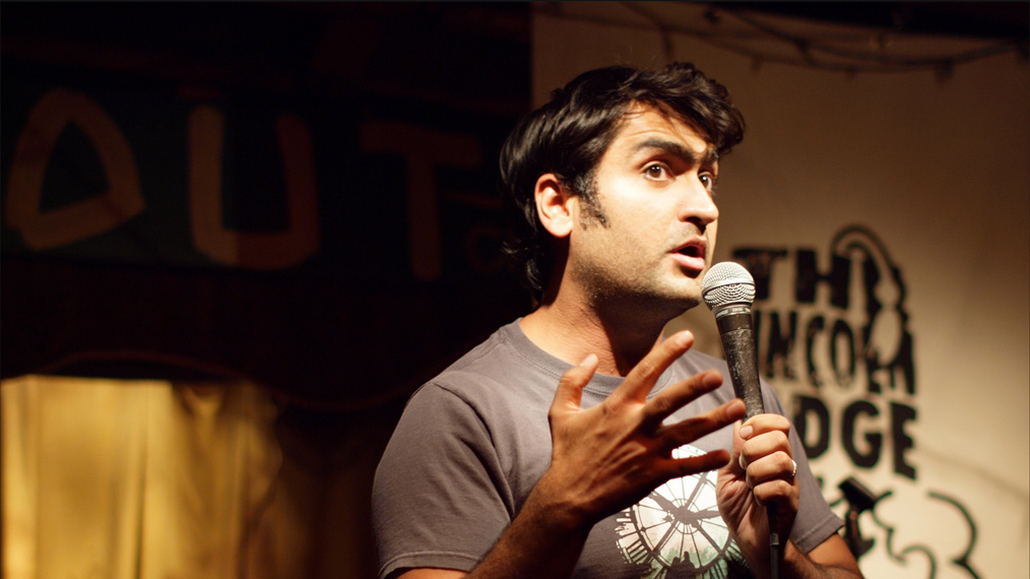 Amid all too many real life horrors, Muslim American actors and writers have recently delivered an almost too-good-to-be-true renaissance on the screen. After decades of racist, stereotypical Hollywood portrayals of Arabs and Muslims, over the past few months there has been a string of powerful, critically acclaimed star turns by Muslim American actors, writers, and directors. In particular, Aziz Ansari, Hasan Minhaj, and Kumail Nanjiani have each created remarkable pieces of popular culture that have simultaneously challenged genre conventions and—usually indirectly—deeply-held Islamophobic stereotypes.

Each of these three performers have come to their art in different ways, but they not-coincidentally all touch on similar themes in their work. Each of them draws on their fascinating biographies to generate compelling (and hilarious) material. They describe struggling with deciding how to be Muslim, and landing in variously “secular Muslim” places. Relationships with their families—parents in particular—frame the dramatic tension for many of their stories. Ansari, for example, co-wrote the episode “Religion” for his television series Master of None with his brother. The (semi-) autobiographical episode delves into Ansari’s relationship with his immigrant family. Through conversations that his character, Dev, has with his parents (played by Ansari’s real-life parents), he comes to terms with his decision to turn away from some of his religious upbringing.

Part of what makes television representations of familial relationships like this so compelling is how true to life they feel. In “Religion,” this is aided by the witty but emotional dialogue and the inclusion of Ansari’s actual parents in the show. The more important aspect, though, is that this is quite simply just a story about life in America. Young adults wrestling with religious teaching is something just about everyone in America can relate with—not just immigrants and not just Muslims. Many Americans struggle to reconcile classically liberal ideals of individualism and self-determination with the religion that they grew up with. There are no right answers here. We all struggle to incorporate new ideas that challenge our forebears, to come of age while working out whether (and how) to stay true to our roots.

Such deeply human stories, though, have rarely been delivered by people of color—especially Muslim people of color—in American television and film. Representations of Arabs and Muslims in American cinema have been almost exclusively wide-eyed terrorists and moronic villains. Even supposedly well-rounded characters on critically acclaimed television shows have too often fallen into the trap of caricature. Such depictions are usually written and produced by White Hollywood mainstays (which is not inherently a problem, but it clearly hasn’t been great in practice). Given the troubled history of Hollywood’s treatment of characters like these, major changes to the way these stories are told would seem to require a new set of storytellers. It might be telling that the three most prominent artists in this sudden renaissance—Ansari, Minhaj, and Nanjiani—are all men, and all are not Arab Americans. That these three have broken through from among many dozens of successful comedians—women and men—who have a “Middle Eastern” or “Muslim” identity is probably no accident. However their emergence happened, the stories these three men tell are all emotionally powerful and expertly told.

Minhaj’s rapid rise to stardom from struggling as a comic to ridiculous Pizza Hut commercials and then suddenly to the Daily Show with Jon Stewart is retold brilliantly in his new stand-up special on Netflix. The special premiered only a short time after his acclaimed performance as host of the 2017 White House Correspondent’s Dinner. Minhaj tells a moving story about a young man trying to find a way to connect with both his family and his chosen profession. The presentation challenges numerous stand-up conventions, with a multilingual and multimedia presentation amid bold cinematography. Again, however, perhaps the main achievement here is having such a moving story told on American television screens by this second-generation Indian American. The themes around family, love, and growth come through loud and clear.

Nanjiani, meanwhile, has been a successful actor, comedian, and writer for several years. Now, he has co-written and stars in a semi-autobiographical film, The Big Sick. This heartfelt romantic comedy also tells a universally appealing story about relationships and family coming together, this time around confronting a loved one’s illness. Nanjiani describes his real-life challenges after immigrating as a teenager, struggling to relate to his parents as he came of age in America. Again, the story is compelling but part of what makes it so remarkable is that it is not controversial or about terrorism or Islamophobia or anything like that—it’s just a great film co-written by Kumail Nanjiani.

Storytellers like these have almost never gotten the support of Hollywood. That three of them have achieved so much in such proximity is amazing indeed. This “Muslim moment” in Hollywood developed amid the sickening display of Islamophobia in the 2016 elections, which perhaps has given way to intense interest in the American mainstream for stories about “regular” Muslims. Still, it might be more than just a blip, and just maybe this can be a major turning point. Aasif Mandvi—another tremendously successful Muslim American comedian—once half-joked that America needed a wholesome Muslim American sitcom to break down stereotypes, a la The Cosby Show. He actually produced such a sitcom in 2015, Halal in the Family. If the success of shows like these allows more actors, writers, and producers to come up as they should, then 2017 will indeed have been a turning point.

The best possible next step from here would be for this Hollywood renaissance to lead to a drop in the unspeakable violence, hate crimes, and discrimination affecting Arab, Muslim, Sikh, and South Asian American communities. Representations of Middle Eastern, Arab, and Muslim “terrorists” have dominated Hollywood for decades—it would be nice if, like Hasan Minhaj’s Pizza Hut commercials, that all just faded away and became a distant memory.

Erik Love is Assistant Professor of Sociology at Dickinson College in Pennsylvania and the author of Islamophobia and Racism in America (NYU Press, 2017).