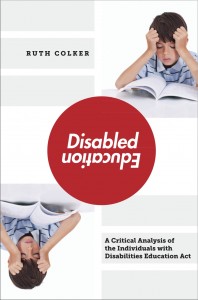 Raised in a Spanish-speaking household, Peter learned to speak English at age two while recuperating from a car accident that left him paralyzed from the waist down. Despite an amazing work ethic and informal assistance from others, he struggled in school with painfully slow reading and writing. After reading a paper that he wrote for one of my law school classes, I discretely asked him if he had ever been tested for a learning disability. His paper had great content but some awkward phrases. Four weeks later, after I helped him find inexpensive diagnostic services, he learned at the age of 25 that there was a name for his academic struggles: dyslexia (the most common type of learning disability). As a low-income student with a visible disability, Peter had no idea he should be evaluated for dyslexia.

This diagnosis served as a pivotal moment for Peter; his self-confidence improved as he realized he was not struggling due to low cognitive aptitude. He graduated from law school with some accommodations, received extra time on the bar exam, and became a successful lawyer.

Disappointingly, the American Psychiatric Association has barely recognized the existence of “dyslexia” in its recently published fifth edition to the Diagnostic and Statistical Manual of Mental Disorders (“DSM-5”). And its fleeting recognition of dyslexia is likely to be confusing.  Despite comments from leading practitioners in the field to make “dyslexia” its own category, the APA stubbornly maintains the amorphous category of “Specific Learning Disorder” and then breaks that category down into impairments in reading, written expression or mathematics. Under “impairment in reading,” there is a brief notation that “Dyslexia is an alternate term used to refer to a pattern of learning difficulties characterized by problems with accurate or fluent word recognition, poor decoding, and poor spelling abilities.” Although the long-awaited Fifth Edition was supposed to reflect the most recent state of knowledge about disability, it adds confusion by failing to recognize dyslexia as its own category.

The proposed DSM-5 reflects a misconception of dyslexia. The amorphous category of “Specific Learning Disorder” presumes that individuals with a learning disability will be low-achieving and need continual testing to demonstrate the existence of this impairment based on the stereotype that they might outgrow it.

It also presumes that adults with learning disabilities will have been typically diagnosed during their primary or secondary education, ignoring the large number of young people in our society who do not have access to the clinical services necessary for such a diagnosis.

One of the most alarming aspects of the DSM-5 is that it buys into what is called the “Response to Intervention” (“RTI”) process for diagnosing a learning disability. RTI is a creature of No Child Left Behind –  it requires that school districts provide low-achieving students with intervention to help them attain grade-level success.  RTI has nothing to do with disability; it is a mechanism to help students, especially poor students, attain grade-level expectations. The DSM-5 requires an RTI process for at least six months before a student can be classified as learning disabled and receive special education and related services. In a January 2011 letter, the United States Department of Education has criticized the way the RTI process often delays a referral for special education classification of students with learning disabilities. By requiring RTI, the proposed DSM-5 could worsen an already-existing problem.

In recent years, we have made enormous progress in providing appropriate assistance to millions of Americans with learning disabilities while maintaining high expectations for their achievement at school and at work. At the same time, science has opened up our ability to understand dyslexia by imaging how the brain works when a person is reading. The DSM-5 ignores legal and scientific developments, downplays the category of “dyslexia,” and turns back the clock with disastrous consequences for children and adults with learning disabilities, like Peter, who are tremendously bright but need modest accommodations in order to become productive, tax-paying members of society.

One thought on “Learning disability and the DSM-5”