What to do with children given that parents are now more in charge of their education than just a month ago? Yes, this is a great time for children to learn to cook a new dish, discover some dance moves, or photograph daily life in the home. Still, parents increasingly want their children to get more academic learning at home. While parents have access to free, online academic resources in addition to their kids’ schoolwork, how to actually put them into practice can be daunting.

Supplementing a child’s school curriculum is not new to many families. A growing trend in after-school activities for children from pre-school up to high-school has been extracurricular education, not simply sports or the arts. Families across the economic spectrum have been adding to their kids’ school learning through at-home guidance by parents, a paid coach, or after-school learning centers. Based on in-depth conversations with teachers, parents, and children, ranging from spelling bee and math competition finalists to kids who much rather be playing Xbox, there are a few strategies to keep in mind.

Parents should be engaged

When parents purchase workbooks or pick online lessons for their children to supplement their schoolwork, it helps to check in with them rather than let the lesson-plan become the teacher. One mother, whose daughter attended an after-school learning center, sat with her after she finished the assigned work and went over mistakes, even though she didn’t need to, so that her daughter could understand more quickly and not let the wrong information set in. This does not mean that parents cannot leave their children for hours at a time. But, learning happens best when the children see the assignments as part of a conversation they are having with their families, not a conversation between them and the book or website.

Of course, supplemental learning at home is not the same as school, which parents should take advantage of. Many people I spoke with made learning into a game. One family studying for a spelling bee made placards, like the ones worn by contestants at the Scripps National Spelling Bee, for each family member and then quizzed one other on vocabulary. Parents can take advantage of the fact that kids rather be outdoors than studying. A middle-school explained how his father taught him vocabulary when he was in elementary school, “I guess in the early stages, we’d just be playing catch or something, and he’d be quizzing me on words while we’d be playing.” The boy later went on to a national spelling competition.

Children obviously enjoy being with other children, and virtual hangouts can serve as study sessions. A former Scripps National Spelling Bee champion said, “Probably the most important external ‘resource’ of preparation was the group of friends I made. … We would give each other virtual bees.” If even two children are given the same reading assignment, they can create their own study group. The advantage is that it makes studying a cooperative rather than competitive activity, as they compare interpretations of the passage and find creative modes to share their thoughts (e.g. they try to guess what comes next in the story, which one writes up while the other draws a picture to represent it).

Stay a parent, not a teacher

Another former Scripps champion confessed, “There were times when I would throw my dictionary across the room or throw it on the bed and tell my mom ‘I don’t want to do this anymore, I literally can’t’. My mom would be like, ‘Why don’t you take a break for a couple of days … It’s not just about winning. It’s about the lessons you’ve learned.’” While teachers often are well-versed in attending to children’s social and emotional needs, they still have a certain amount of content they need to cover. As parents supplementing their learning, we do not. Parents need to listen to the verbal and nonverbal cues our children are giving us and adjust how much we expect and how we approach it. It is alright to learn at a slower pace than anticipated.

Let the kids show off

Children like feeling smart, but without peers around them or teachers to ask them to share what they know, they lack outlets. Parents should find ways, even if contrived, to have their children feel good about the fractions they have practiced or the historical figure they have learned about. Questions to kids in the kitchen or at the dinner table are easy opportunities.

This can become a full-time job, literally

If all of this sounds like it is a full-time job for parents, the good news is that it can be, literally. Vijay Reddy, outside of Dallas TX, built up a wealth of knowledge and materials as he coached his children in competitive academics. He later started his own tutoring company for youth similarly committed. Other parents developed side businesses for tutoring or created their own workbooks now sold online. There might be a non-profit organization waiting for you to join it or start based on the skills you have learned. In other words, parents can see this as a time to learn alongside their children. 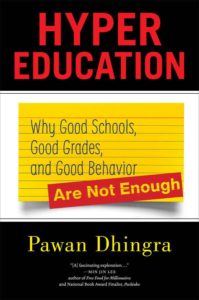 Pawan Dhingra is a professor at Amherst College and author Hyper Education: Why Good Schools, Good Grades, and Good Behavior Are Not Enough, coming later this month from NYU Press.