March Madness is just kicking off, and ESPN has already predicted that this year’s tournament will see over $9 billion in bets and gambling. 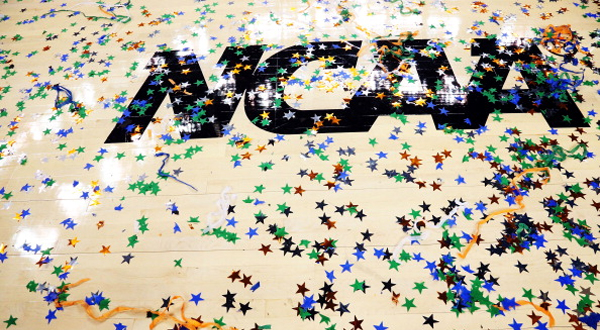 From offices to college campuses, March Madness continues to attract more and more constituencies in ways that other sporting events, even the Super Bowl, cannot. This time in March and April is often marked by explicit displays of collegiate allegiances and intense and passionate rivalries within the institution of higher learning, a kind of ‘madness’ that is unmatched in any collegiate setting across the globe.

Yet, there is something very particularly American about this event. This is very much a United States phenomenon. In many ways, March Madness tells us about ourselves, and the values we interject into collegiate sports, and March Madness, in particular. It is this matter of values—and how sport reflects us, as an American society—that I am interested in. Specifically, I want to focus on student-athletes in two respects: the male basketball collegiate players and the women’s NCAA tournament.

While March Madness is a time to celebrate alma maters, there is a way in which the iconicity of the athletes, the power and recognition of coaches, and the transcendental nature of sport intersect to create quite a venomous concoction. American studies scholar, Nicole Fleetwood, in her elegant and sophisticated analysis of the visual plane of black iconicity in Troubling Vision: Performance, Visuality, and Blackness, asks that we critically evaluate how iconicity and icons fail to address either the messiness of social life or its major contradictions. Likewise, the iconicity of coaches, such as Jim Boeheim, John Calipari, Roy Williams, and Mike Krzyzewski, along with number of collegiate players, hides significant problems within the realm of sport. In the midst of sheer athletic movements, creative plays, intense and intimate camaraderie, and shows of sportsmanship, many other questions and points will remain, at best, minimally discussed and, at worst, completely brushed over.

With so much of the focus on the athleticism of the young men in the men’s national basketball tournament, there is little time to reflect on their lives outside of sport and in classes, in the collegiate physical environment, and in the larger social landscape. As I have taught in big and small institutions of higher learning, in Division I and Division III schools, and I have myself played and coached at the collegiate level, I recognize that the student-athlete has become a source of capital in ways that the “student” is extracted from the “athlete.” The hyphen connecting and demanding a peaceful, synchronized, holistic existence does not exist in present-day sport. Rather, our collegiate (as well as other forms of amateur) sports are a mere show in ideals, but the reality is much more troublesome. “Student” is often treated as an adjective to athlete. With that, as the games proceed through March Madness, I ask this first question: What are ways to create a fantastic learning experience for student-athletes? What type of support is there and where is the support for the student-athlete? The athlete has become the pariah within the realm of students, as if his/her natural place is often assumed to be only on the court, the field, the pool, or the mat. My encounters with student-athletes have shown the precarity of their lives and various forms of alienation within institutions of higher learning.

There has been a trend to let out a big sigh of frustration upon hearing of a student-athlete in one’s class, especially if he is a basketball or football player (read as African American). Although instructors might take great joy in the feats of the athletes on the playing field, the same type of energy does not surface in the face-to-face interactions with student-athletes. As a result, some student-athletes that I have met expressed their alienation in the class setting. They felt like disregarded, like scrap metal. Especially for working-class African American student-athletes, as I discuss in my book, there was the everyday experience and dilemma of already being overdetermined as athletes and sporting bodies. Scott Brooks, in Black Men Can’t Shoot, and Rueben May, in Living through the Hoop, attest to the difficulties of poor young black basketball players. This over-determination meant that their excessive bodies were seen as lacking mind and other key elements of the academic experience.

In the place of this crevice within the college experience for athletes are academic counselors, advisors, and tutors. This seems like a good substitute. However, would anyone substitute John Calipari with a non-sport professional who does not have any of the training, experience, and strong basketball pedigree? Why then would it be okay to insert advisors and tutors who do not have the training and expertise as the professors teaching the courses? The providing of such tutors, counselors, and advisors is important, but it is a double-edged sword, cutting deeply on both ends. For one, it fails to manufacture a positive learning experience and relationship with faculty in the classroom. Instead, what we need are fewer classes so that student-athletes can enjoy classes like the rest of the student population. Taking only two courses a semester would free up time for student-athletes to engage the material fully. They would not feel overwhelmed and feel like studying is a losing battle especially with the demands of the sporting field.

The athletic academic counseling structure justifies an entire cottage industry of sport services professionals within higher learning without providing a greater critique of collegiate and amateur sport. Several football players would be so worn out that staying awake in class took greater energy out of an already exhausted body. When I asked them why they were tired, a few of them spoke candidly that their coaches take every bit of energy out of them. Each coach, assistant coach, and trainer is there to take out all that if left in the athletic body. The student-athletes secure jobs and income for a wide assortment of sport professionals yet their lives reveal such insecurity. An injury could derail the entire collegiate experience. Yet, these students are pushed to the limits, and when demands are made for large stipends or paying student-athletes, the response is always, “They are lucky to be here,” “The scholarship is their payment,” or “The scholarship is the greatest gift.” Really? Is it this simple? Or have we become so blinded to the corporate regime of college sports?

The student-athletes barely have time for anything other than sports. Yet, they have to manage their work day (sports training) with their full-time class schedule. How many students, other than student-athletes, have to travel long distances for work, miss classes (and holidays and family events), and train for the entire course of the year? While we watch March Madness and take in all the joys that come with it, we have to ask whether the traditional student would have to put in the same hours and labor without pay as student-athletes. Student-athletes cannot even enjoy other experiences of the college environment, such as partying, studying abroad, holding part-time jobs, and securing important professional internships. With each round that goes by during March Madness, we should be obligated to ask how to equip and provide support for all of our students, including our student-athletes. As jobs increase around sports like coaches, assistant coaches, trainers, medical professionals, and even scholars of sport like me, we owe it to fair play in sport that we give our student-athletes a fair play in academia with stipends and an unlimited commitment to fund the scholarship for student-athletes, even many years after their playing days.

While we talk about guaranteeing college futures for male student-athletes, we need to also interrogate why men’s collegiate basketball appears in sports media as just “basketball,” while women’s basketball foregrounds the gender category of woman as an adjective, appendage, and an addition to basketball. Basketball, as my research has shown, was already taken for granted as “masculine”—a sport to be practiced by men. As such, March Madness stands ubiquitously for men’s basketball. While filling out the men’s bracket, there is little engagement in sporting communities for filling out the women’s bracket. Accordingly, the iconicity of men’s basketball reduces sport to a male arena and celebrates male sporting accomplishments. In the process, female athletes, like female basketball players, are relegated to a realm where they are outside the language of everyday basketball talk. There will be little to no discussion of how Title IX does not guarantee equity in the field of play. (See Deborah Brake’s brilliant book, Getting in the Game: Title IX and the Women’s Sport Revolution.) Rather, one sees equal numbers of men and women playing collegiate sports—but this metric does not translate into equal access to resources, nor does it mean that the voices of women players are heard as loudly as men’s.

This disparity is also prevalent in sponsorship opportunities and the minimal funding for women’s teams. There is frequent talk about the greatest collegiate basketball coaches, but rarely do coaches of the women’s game like Pat Summit, Dawn Staley, and Geno Auriemma enter that conversation. Likewise, there are many men coaching the women’s game, but no women coaching (as a head coach) the men’s game. Furthermore, as the case of transgender athlete Kye Allums shows us, there are few spaces in either the men’s or women’s game for gender-non-conforming or trans athletes. To add, another disturbing fact is the gendered and sexual violence within women’s collegiate sports. None of this, or very little of it, will be the subject of conversation during March Madness. The sexual violence that is normalized on college campuses seeps into and destroys women’s athletics as well. As basketball is rendered as a game for men, the violence against female basketball players is not always fully investigated. This is also because the women’s tournament becomes a side-show, not the main attraction. As a result, the storylines and issues within women’s sports are not legitimated and made visible.

There has to be a national discussion about sexual violence and it must also take place within the confines of collegiate sport. We need that discussion to begin now. In the late 1960s, sociologist Dr. Harry Edwards played a critical role in organizing African American student-athletes against racism locally, and within the larger Olympic Games. We know of the 1968 Mexico City Olympics protest. There is a foundation, although we cannot always see it, to use sport as one of the key arenas for creating livable, fair, just, and equitable worlds. Sport, as the great scholar C.L.R. James has argued in Beyond a Boundary, is not apart from the real world but intricately connected to it. Sport provides various forms of reprieve from the outside world but that does not mean that we can forget about how power operates in sporting cultures. Through sport, we can harness new social arrangements and social justice principles that then truly make sport the most utopian social site.

Stanley I. Thangaraj is Assistant Professor of Anthropology at City College of New York and the author of Desi Hoop Dreams: Pickup Basketball and the Making of Asian American Masculinity (NYU Press, June 2015).