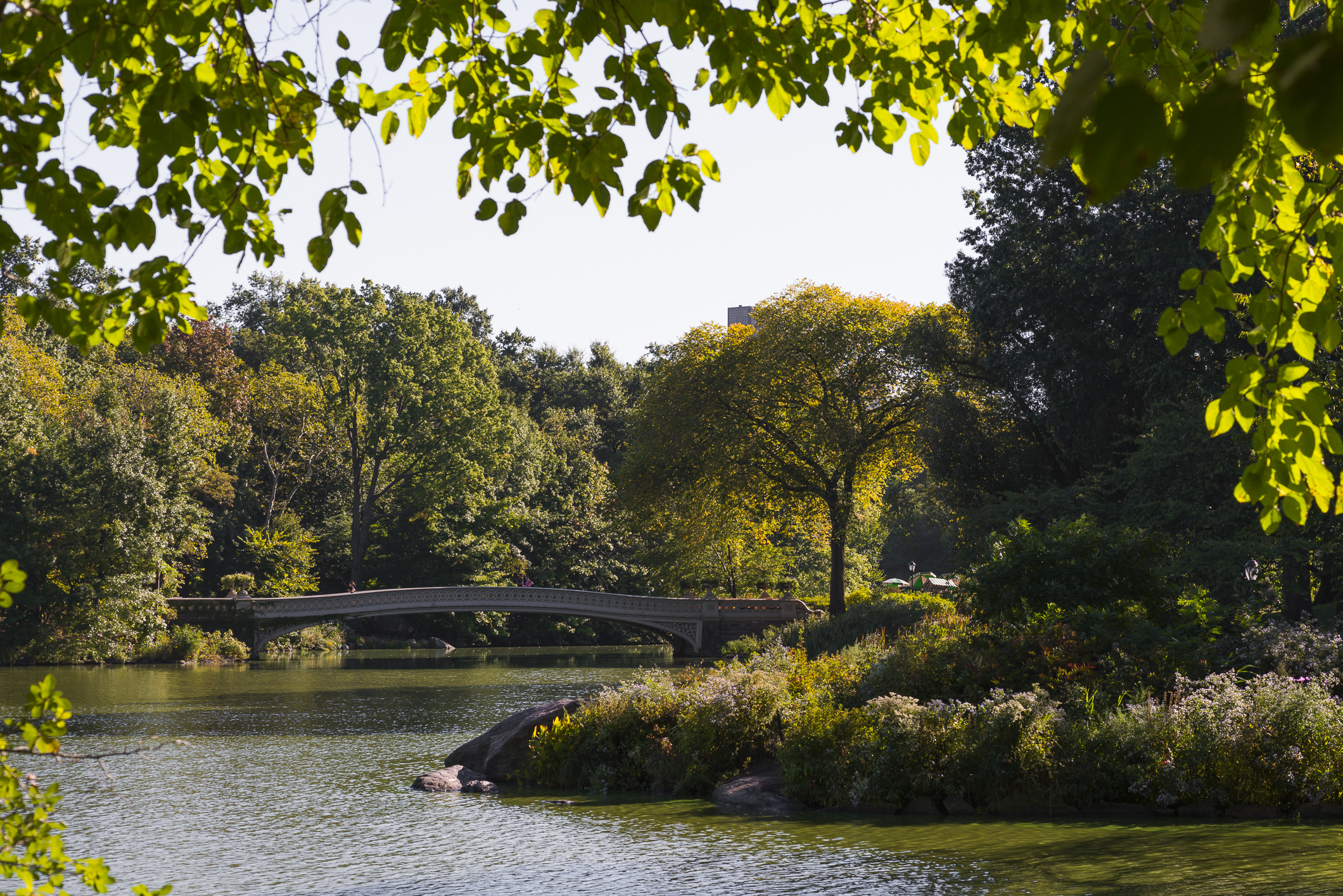 Presto chango! Or should I say . . . now you see it, now you don’t? Over the years, I’ve observed countless examples of disappearing buildings. Who hasn’t? After all, most civilizations that build also clear away older structures.

So when I began my study of a Victorian-era book about Central Park, I wasn’t surprised to find that many of its illustrations depict structures that are long gone. The book, written by Clarence C. Cook and titled A Description of the New York Central Park, dates from 1869 and features around one hundred drawings by Albert Fitch Bellows. He was a popular artist in his day, and his work is marked by charm and accuracy. I scrutinized the images and studied historic maps. During trips to New York, my husband and I tramped around the park, locating the settings of Bellows’s subjects. Wherever some semblance of an original scene survived, my husband photographed it, if possible from the same spot where Bellows once stood. In many cases, however, little or nothing from the Victorian era remained. Late in 2015, I learned that reconstructions of the boat landings on the Lake were going to be installed. When I saw them last summer, I was amazed. They looked exactly like the landings that Bellows had drawn. Magic!

In reality, the planning and execution of this feat was performed by the Central Park Conservancy between 2014 and 2016. During that period, the Conservancy reconstructed rustic structures, paths, and the waterways of the Ravine in the park’s North Woods, also illustrated by Bellows. These projects have delighted me, and judging by what I have observed in the park, they are bringing smiles to thousands of visitors.

As an architectural historian, I have been inspired to analyze how people think about reconstructions. What makes a reconstruction worthy of undertaking? Why are some reconstructions admirable? What makes others whacky or cheesy? I offer these points: By and large, the most satisfying reconstructions are built with quality materials. Moreover, people respond positively when a reconstruction makes sense in a larger context. We react favorably when the reconstruction has a connection to the location where it has been built. And above all, when we encounter a reconstruction, we respond to the intent behind it. When it was erected for a commercial purpose, we know it. When the motivating purpose was grounded in a community effort, reflecting a group’s attachment to a special building or place, we get that, too.

One of the most curious reconstructions I’ve encountered is a row house at 28 East 20th Street. It’s the Theodore Roosevelt Birthplace and National Historic Site, run by the National Park Service. In fact, the twenty-sixth president never set foot in the house. The brownstone that was his childhood home, built in 1848, was demolished in 1916. Just days after his death in 1919, a group of New York City women gathered, and within weeks they founded a memorial association. They hired a female architect, Theodate Pope Riddle, bought the house site, raised the funds, and oversaw the reconstruction of the birthplace, dedicating it in 1923. Guided by interviews with the family, the interiors were decorated with original furnishings from the Roosevelts and from the period. The materials are genuine, and the house fits the context of the neighborhood. The focus on a future president’s early years is meaningful and part of our national story. And no one is hiding the facts. Today when visitors tour the house, they learn that it’s a reconstruction. Indeed, the saga of the women who rallied to rebuild the brownstone adds a fascinating dimension to its story.

Colonial Williamsburg presents many reconstructions, including the Governor’s Palace and the Capitol. In 1927 John D. Rockefeller Jr. agreed to fund the restoration of the historic Virginia town that had served as the colony’s seat of government. After the Boston architectural firm of Perry, Shaw, and Hepburn planned the project, work began in 1928, and the first visitors arrived in 1932. Over the years, more than eighty original buildings have been preserved while new versions of lost buildings continue to be added. Whether overseeing preservation or reconstruction projects, the nonprofit organization’s methods meet the highest standards. The visitor experience is all the more compelling because the living history museum is embedded in the colonial town and incorporates authentic eighteenth-century buildings. Yet the intermingling of preserved and reconstructed attractions, including the site’s most important buildings, presents a challenge. Taking its educational role seriously, the museum strives to inform visitors about what is original and what is not.

When prominent landmarks are obliterated through war, the loss can be searing—to the population that has suffered the loss and to those who care about cultural accomplishments. Two reconstructions in recent years are noteworthy. Between 2001 and 2004, the sixteenth-century Mostar Bridge in Bosnia and Herzegovina, destroyed by Croation forces in 1993, was rebuilt. In Dresden, a new Frauenkirche was completed in 2005 after an eleven-year campaign. Sixty years earlier, the original eighteenth-century domed church collapsed in a charred heap of rubble when the Allies firebombed the city. Both examples are faithful reconstructions, hailed as triumphs.

At the other end of the spectrum, what can we make of the “Eiffel Tower Experience” in Las Vegas? It opened in 1999 and is operated by Caesar’s Entertainment Corporation. The tower, a half-scale replica of the French landmark, rises from the roof of the Paris Las Vegas hotel. Visitors can patronize a restaurant and gaze over the city’s Strip. Authentic? Rooted to its place? There are those who might argue either way. While the tower lacks the history of the original, not to mention the views of Paris, the tower is true to the Vegas vibe and context.  Commercial? Certainly. Logically enough, when I read the online comments of visitors, they frequently judge the tower experience by whether it’s worth the money. Most customers are satisfied and rate the attraction accordingly. It’s fun, and the views are great.

Back in Central Park, the visitors are having a good time, too. But when they post their photos of the shelters and bridges, waterfalls and water bodies, designed by Calvert Vaux and Frederick Law Olmsted, they also voice their admiration of this creation of the nineteenth century. I realize that most park visitors don’t distinguish between what is original and what has been entirely rebuilt. But that doesn’t trouble me. In the case of Central Park, reconstruction must merge with restoration. Public parks experience heavy use, and many elements deteriorate over time. Having become well acquainted with Bellows’s illustrations of the park, I know what it once contained. When I’m in the park and see stone steps that lead nowhere, I hope that one day a rustic summer house will reappear. The restoration of the park, including numerous reconstructions, has been going on since the 1970s. As with the rebuilding of the Mostar Bridge and the Frauenkirche, the work isn’t magic at all. The reconstructions are the achievement of many people—reconstructions that are as splendid and admirable in their own way as the originals that came before them. 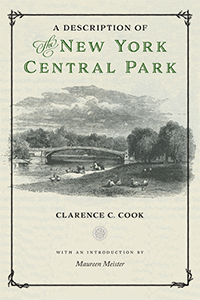 Maureen Meister is an art historian who has taught for many years at Boston area universities including Tufts, Lesley, and Northeastern. She is the author of Arts and Crafts Architecture: History and Heritage in New England and Architecture and the Arts and Crafts Movement in Boston: Harvard’s H. Langford Warren; the editor of H. H. Richardson: The Architect, His Peers, and Their Era; and wrote the introduction for A Description of the New York Central Park (NYU Press, 2017).

3 thoughts on “Magic in Central Park and Other Amazing Feats”