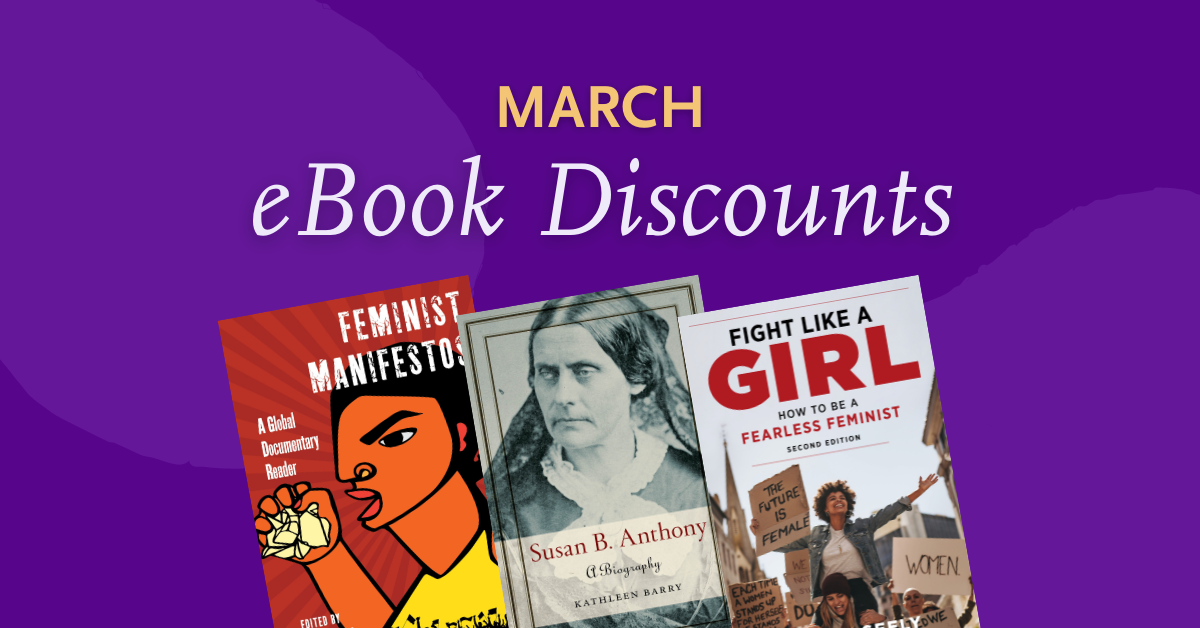 NYU Press commemorates Women’s History Month with a selection of March eBook deals, on sale for just $1.99 from March 1 to 31!

Tattoos, Women and the Politics of the Body

A riveting and unique study, Covered in Ink provides important insight into the often unseen world of women and tattooing.

Drawing on auto-ethnography and extensive interviews with heavily tattooed women, Covered in Ink provides insight into the increasingly visible subculture of women with tattoos. Author Beverly Thompson visits tattoos parlors, talking to female tattoo artists and the women they ink, and she attends tattoo conventions and Miss Tattoo pageants where heavily tattooed women congregate to share their mutual love for the art form. Along the way, she brings to life women’s love of ink, their very personal choices of tattoo art, and the meaning tattooing has come to carry in their lives, as well as their struggles with gender norms, employment discrimination, and family rejection.

This comprehensive biography of Susan B. Anthony traces the life of a feminist icon, bringing new depth to our understanding of her influence on the course of women’s history. Beginning with her humble Quaker childhood in rural Massachusetts, taking readers through her late twenties when she left a secure teaching position to pursue activism, and ultimately tracing her evolution into a champion of women’s rights, this book offers an in-depth look at the ways Anthony’s life experiences shaped who she would become.

In the early twentieth century over two hundred of New York’s most glamorous socialites joined the suffrage movement. Their names—Astor, Belmont, Rockefeller, Tiffany, Vanderbilt, Whitney and the like—carried enormous public value. These women were the media darlings of their day because of the extravagance of their costume balls and the opulence of the French couture clothes, and they leveraged their social celebrity for political power, turning women’s right to vote into a fashionable cause.

Understanding the need for popular approval for any social change, these socialites used their wealth, power, social connections and style to excite mainstream interest and to diffuse resistance to the cause. In the end, as Neuman says, when change was in the air, these women helped push women’s suffrage over the finish line.

Lives in the Law

The captivating story of how a diverse group of women, including Janet Reno and Ruth Bader Ginsburg, broke the glass ceiling and changed the modern legal profession

In Stories from Trailblazing Women Lawyers, award-winning legal historian Jill Norgren curates the oral histories of one hundred extraordinary American women lawyers who changed the profession of law. Many of these stories are being told for the first time. As adults these women were on the front lines fighting for access to law schools and good legal careers. They challenged established rules and broke the law’s glass ceiling.Norgren uses these interviews to describe the profound changes that began in the late 1960s, interweaving social and legal history with the women’s individual experiences.

How to Be a Fearless Feminist

A blueprint for the next generation of feminist activists

Fight Like a Girl offers a vision of the past, present, and future of feminism. With an eye toward what it takes to create actual change and a deep understanding of women’s history and the key issues facing girls and young women today, Megan Seely offers a pragmatic introduction to feminism. Written in an upbeat and personal style, Fight Like a Girl offers an overview of feminism, including historical roots, myths and meanings, triumphs and shortcomings.

Fight Like a Girl is an invaluable introduction to both feminism and activism, defining the core tenets of feminism, the key challenges both within and outside the feminist movement, and the steps we can take to create a more socially just world.

WHAT WORKS FOR WOMEN AT WORK

Up-beat, pragmatic, and chock full of advice, What Works for Women at Work is an indispensable guide for working women.

An essential resource for any working woman, What Works for Women at Work is a comprehensive and insightful guide for mastering office politics as a woman. Authored by Joan C. Williams, one of the nation’s most-cited experts on women and work, and her daughter, writer Rachel Dempsey, this unique book offers a multi-generational perspective into the realities of today’s workplace.

Feminist Manifestos is an unprecedented collection of 150 documents from feminist organizations and gatherings in over 50 countries over the course of three centuries. In the first book of its kind, the manifestos are shown to contain feminist theory and recommend actions for change, and also to expand our very conceptions of feminist thought and activism. Covering issues from political participation, education, religion and work to reproduction, violence, racism, and environmentalism, the manifestos together challenge simplistic definitions of gender and feminist movements in exciting ways.

A unique and inspirational collection, Feminist Manifestos expands and evolves our understanding of feminism through the self-described agendas of women from every ethnic group, religion, and region in the world.

FIRST LADIES OF THE REPUBLIC

How the three inaugural First Ladies defined the role for future generations, and carved a space for women in America

America’s first First Ladies—Martha Washington, Abigail Adams, and Dolley Madison—had the challenging task of playing a pivotal role in defining the nature of the American presidency to a fledgling nation and to the world. In First Ladies of the Republic, Jeanne Abrams breaks new ground by examining their lives as a group. From their visions for the future of the burgeoning new nation and its political structure, to ideas about family life and matrimony, these three women had a profound influence on one another’s views as they created the new role of presidential spouse.

These capable and path-breaking women not only shaped their own roles as prominent Americans and “First Ladies,” but also defined a role for women in public and private life in America.

Feminists today are re-imagining nature, biology, and matter in feminist thought and critically addressing new developments in biology, physics, neuroscience, epigenetics and other scientific disciplines. Mattering, edited by noted feminist scholar Victoria Pitts-Taylor, presents contemporary feminist perspectives on the materialist or ‘naturalizing’ turn in feminist theory, and also represents the newest wave of feminist engagement with science. The volume addresses the relationship between human corporeality and subjectivity, questions and redefines the boundaries of human/non-human and nature/culture, elaborates on the entanglements of matter, knowledge, and practice, and addresses biological materialization as a complex and open process.

March eBook deals valid through March 31, 2022, only available through US retailers.