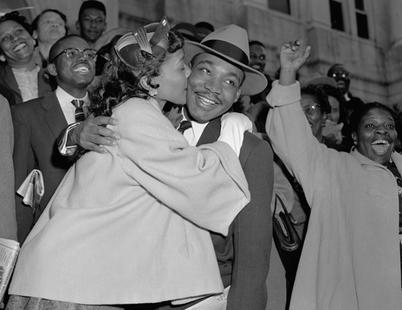 [Note: This piece was originally published on the Deseret News.]

January 19, Martin Luther King Jr. Day, provides occasion for reflection as well as recognition. We honor his personal courage as well as political impact as catalyst for the civil rights revolution.

Initially, he was reluctant to lead beyond his local community, concerned as well as insightful in seeing the crusade might ultimately cost his life. Nonetheless, he took on the national effort, and persevered continuously until his assassination in the spring of 1968.

King’s leadership qualities were recognized while he was still young. Striking rhetorical skill was one key ingredient, cast in charismatic delivery. He was also often, though not always, a shrewd strategist.

To reflect usefully on King’s legacy, accurate understanding of his life is essential. Especially in the case of a murdered martyr, there is a natural tendency to idealize and therefore distort history. That is unfortunate for two reasons. First, oversimplifying complexity of human existence can easily diminish the person described. The leader seems less consequential as the internal personal as well as external battles that define courage are erased.

Second, oversimplifying past times limits our contemporary capacity to draw the most accurate and therefore best lessons for the future. Martin Luther King was not a saint; he was a great leader.

The fact that King endures from that era so sharply defined testifies to the value of both his message and his efforts. The ecumenical March on Washington in 1963 continues to be remembered because of the enormous scale of the pilgrimage, and also the timing. Immediately thereafter, President John F. Kennedy moved from caution to active support of major civil rights legislation.

As this implies, King’s efforts were part of a broad current of great change in American race relations. In 1955, Rosa Parks helped spark the modern civil rights movement by refusing to move to the back of a bus in Montgomery, Alabama. She and others built the foundation for King’s later efforts.

Also in 1948, at the Democratic national convention, young Minneapolis Mayor Hubert H. Humphrey pressed to include civil rights in the party platform. Many advised Humphrey against this; he persevered successfully.

In the resulting maelstrom, Sen. Strom Thurmond of South Carolina and Southern delegates bolted the convention. They established the breakaway Dixiecrat Party, with Thurmond the presidential nominee, and won Deep South states in the fall election. Despite this, President Truman was re-elected.

This set the stage for King’s pivotal role. Without him our nation might have pursued a far worse course. His message is important to recall in evaluating current events and leaders, both elected and self-appointed.

Arthur I. Cyr is Clausen Distinguished Professor at Carthage College in Wisconsin and author of After the Cold War: American Foreign Policy, Europe and Asia (NYU Press, 2000).