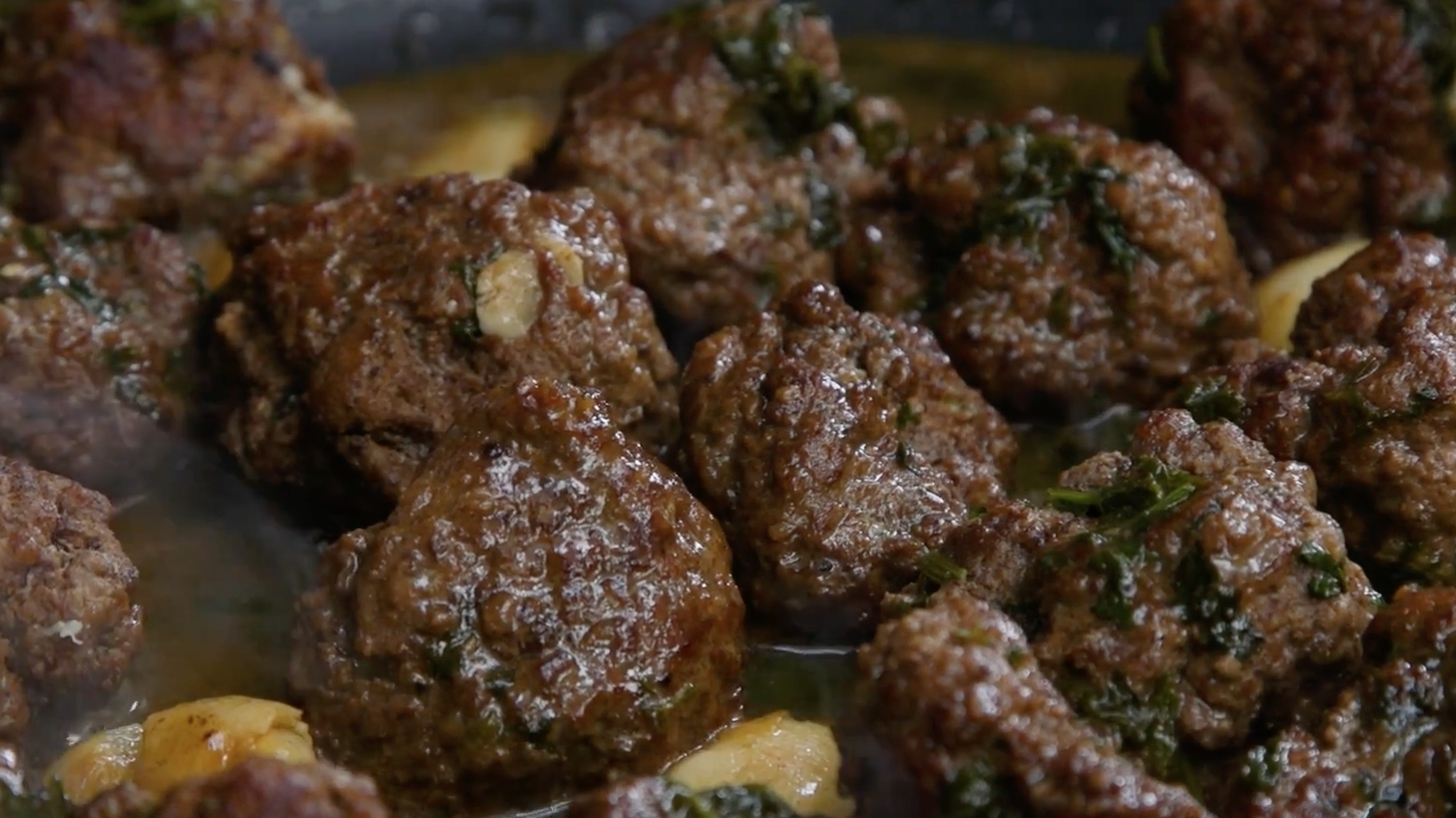 Originally published on the Library of Arabic Literature blog, republished with permission.

Check out this amazing cooking video for Scents and Flavors: A Syrian Cookbook, in which the book’s editor-translator, culinary historian Charles Perry, demonstrates two delicious recipes updated for the modern kitchen. Fortunately, food processors and standard measures make things much easier for anyone who wants to replicate these at home!

The two recipes are “The Dish of Garlic” (tabikh thum) and “The Dish of Pomegranate Juice (tabikh habb rumman). It’s fascinating to see the similarities and contrasts with modern Middle Eastern cooking. The chicken dish, for example, shares much in common with khoresht fesenjan from contemporary Persian cuisine, while the meatball recipe offers a 13th-century garlicky twist on kofta.

The recipes are below. Enjoy!

This highly flavored dish has a curious similarity to the French dish of chicken with 40 cloves of garlic. (It has an even closer similarity to another dish in Scents and Flavors, basaliyyah, “the onion dish,” which is made the same way but with tiny onions instead of garlic cloves.) In medieval Syria, the meat would have been ground lamb, but it works quite well with beef.

The recipe says, “Make sure to use a generous quantity of coriander leaves. The fat has an especially good flavor.”

Knead the meat with the minced garlic, coriander, cinnamon, clove, salt and 4 tablespoons of the cilantro in order to distribute the flavorings as evenly as possible. Form into about 24 walnut-sized meatballs. Put ¼ inch of oil in a large frying pan and fry the meatballs over high heat in several batches until well browned on all sides.

Meanwhile, separate the head of garlic into cloves and remove their peels. (A way to make this easier is to split the peel by hitting a clove with a mortar, a knife handle or the edge of a plate. Note that this will tend to make the resulting dish more garlicky.) You can discard very skinny cloves, which are more trouble to peel than they’re worth.

Remove the meatballs to a mixing bowl as they are cooked. When they are all done, pour off most of the cooking oil, return the meatballs to the pan and add the garlic cloves along with the rest of the cilantro and enough water or broth to come halfway up the meatballs. Bring to the boil and continue to boil until the liquid has entirely evaporated and the meatballs just start to sizzle in the oil, about 30 minutes. The pan juices should have thickened but not dried up.

To speed the process, you can remove the meatballs and garlic after 15 minutes and boil the remaining liquid down rapidly, then return them to the pan and stir around in the oil and thickened pan juices to flavor them.

Many medieval dishes combined meat with fruit. One of the most popular was chicken in a luscious sauce of pomegranate juice, ground almonds, sugar and a spice, usually cinnamon. Some versions added pieces of apple or quince and all garnished the result with fresh mint.

Pomegranate is a seasonal fruit (and it does not keep as well as its leathery skin might lead you to expect), so in medieval recipes the juice is usually reconstituted from dried pomegranate seeds. Today we have a much more convenient year-round option, pomegranate molasses, known as dibs rumman in Arabic, rob-e anar in Farsi, nar pekmezi in Turkish, and narsharab in Armenian. It is readily available in Middle Eastern markets.

Note: Middle Eastern pomegranates are tart, rather than mostly sweet like the variety of pomegranate usual in the West. If you use fresh pomegranate juice (2 cups), reduce the amount of sugar accordingly. In any case, do not use grenadine syrup, which is much too sweet.

Process the almonds until they start to clump up, 4-5 minutes. Add the cup of water and process to a puree. Scrape into a saucepan, add the pomegranate molasses, sugar and cinnamon and bring to the boil, stirring constantly.

Add chicken and cook, if raw, or heat up, if already cooked. At serving time, garnish with mint. 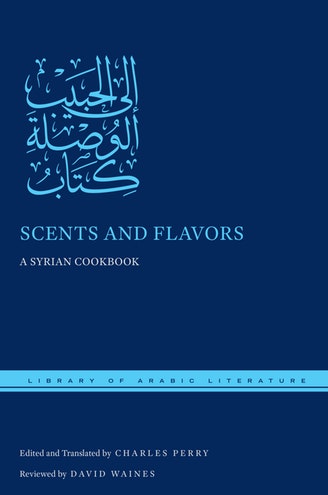 Charles Perry is a culinary historian who has written widely on cooking in the medieval Middle East. He has published and consulted widely on Middle Eastern food history, and has translated a number of pre-modern texts, including A Baghdad Cookery Book: The Book of Dishes. You can find his latest book Scents and Flavors: A Syrian Cookbook available for purchase here. Paperback version coming soon.

Interested in another recipe from Scents and Flavors: A Syrian Cookbook?