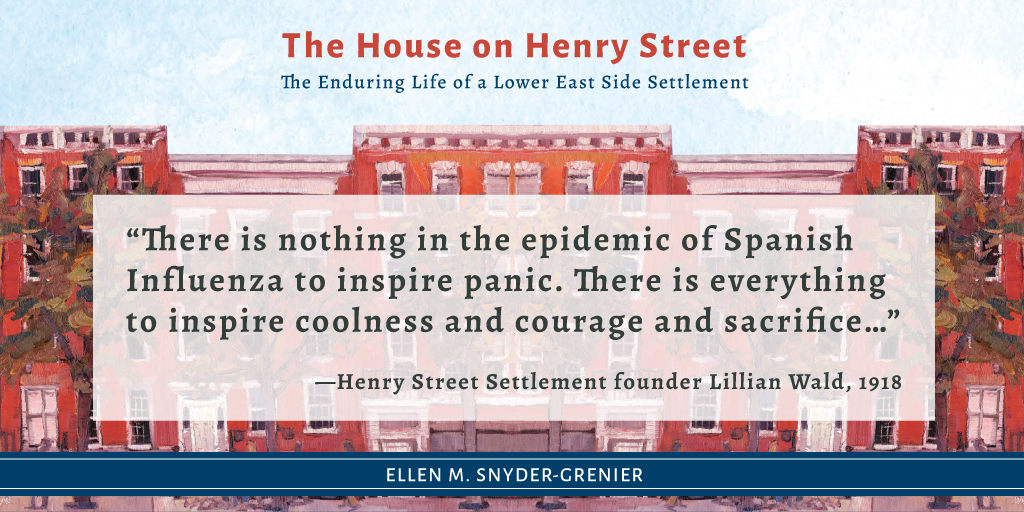 In the fall of 1918, New York was in crisis. In a city characterized by close, crowded living conditions, an incurable disease—the Spanish flu—had cut a wide and staggeringly cruel path. The rapid rise of victims quickly  overwhelmed hospitals and their overworked staffs. On an impoverished Lower East Side, where the disparity in access to good health care was real and stark, the virus was taking an unimaginable toll.

Without a cure, the only course of treatment was expert nursing care. Enter Henry Street Settlement. Its skilled corps of visiting nurses fanned out to treat patients on the Lower East Side and across the city, never refusing a call. But that wasn’t all. Lillian Wald coordinated a citywide response. As the newly named chair of the New York City Nurses’ Emergency Council, she mobilized nursing schools, social work agencies, civic organizations, religious institutions, and others to meet, together, the overwhelming challenges at hand—and to consider how the crisis would impact the future.

A little more than 100 years later, the city is again in the grip of a deadly pandemic. Henry Street—now a sweeping social service organization—is once again responding with experience and agility. Even as it mounts a public health and safety response to answer immediate needs, it is also thinking ahead, so that it can respond to the economic trauma that follows in the pandemic’s wake. Even now, as staff and volunteers work 24/7 to meet the overwhelming and unimaginable demand for services, it is envisioning how to adapt to help a community in the coming months and years as needs evolve.

One hundred years ago, Lillian Wald called this salient characteristic the ability to “move with the times.” That capacity—to nimbly respond to neighbors’ most pressing needs—is what has helped Henry Street survive where hundreds of settlements across the nation, like it founded at the turn of the last century, have not. On Henry Street, the current crisis is balanced by hope for the future.