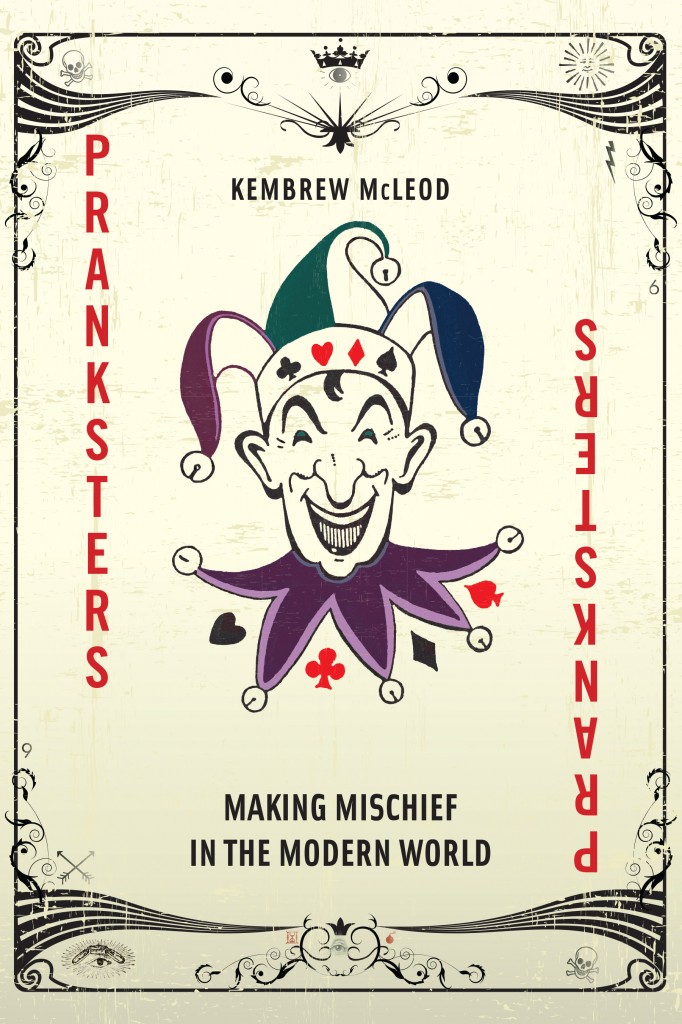 To celebrate April 1 and the release of our new book, Pranksters: Making Mischief in the Modern World, today we have a Q&A with the author—and self-proclaimed prankster—Kembrew McLeod. McLeod discusses pranks, hoaxes and cons (and what makes them different), the origins of secret societies, and how pranks and humor have been used throughout history to spark debate and inspire change.

Interviewer: What are the differences between pranks, hoaxes and cons?

Kembrew McLeod: When media outlets report that a person has been “pranked,” they are often discussing what I consider a hoax. A hoax is a kissing cousin of a prank, but its primary purpose is to fool people and attract attention. A prank, for me, is a staged provocation that uses media to enlighten or stir up a debate. I use cons as an all­purpose term for scams that are meant to defraud or gain an advantage—like an email phishing scam. Although it seems like the Internet Age has created a hurricane of pranking, hoaxing and conning, this tricky tradition has thrived for centuries.

You mention that one of America’s “founding fathers” was a merry prankster.

Ben Franklin was an O.P.—Original Prankster. In fact, Franklin’s very first print publication was a pseudonymously penned hoax (he wrote more than 100 satires, pranks and hoaxes under fake names over the course of his lifetime). Just before he died, Franklin penned an op­ed under the name “Historicus,” which trolled the anti­abolitionists by arguing that Muslims should enslave Christians. You won’t find that story in any Fox News­produced documentary on Ben Franklin!

What does media have to do with pranks?

If reduced to a mathematical formula, the art and science of pranking can be expressed as Performance Art + Satire x Media = Pranks. Put simply, pranks are playful critiques performed within the public sphere, and amplified by media. They allow ordinary people to reach large audiences despite constraints (like a lack of wealth or connections) that would normally mute their voices.

What are the prank origins of the urban legend that smoking banana peels can get you high?

Members of the hippie band Country Joe & the Fish started this rumor, which first spread through word of mouth and was quickly picked up by the national news media. Soon, lots of people joined in on the fun. For instance, Rep. Frank Thompson drafted the Banana Labeling Act of 1967 after a “high official in the FDA,” the Congressman claimed, urged him to introduce the bill. “From bananas,” Thompson stated in the halls of Congress, “it is a short but shocking step to other fruits.”

The past year has seen many pranks and hoaxes. Does the wired age lend itself to these events, or are we just more aware of them?

The Internet has changed the ways that pranks, hoaxes and cons can circulate, but trickery has been a pronounced part of the modern age since Jonathan Swift’s time. Pranks went viral much more slowly back then, but the dynamic is still the same.

Your book pays homage to women involved in important pranks. Many readers are probably familiar with Yoko Ono, but fewer know WITCH. What was WITCH?

The Women’s International Terrorist Conspiracy from Hell (WITCH) was an unruly group of ‘60s feminists who pulled many a political prank. For instance, they crashed a large bridal fair and performed an Un­Wedding Ceremony: “We promise to smash the alienated family unit,” they said in unison. “We promise not to obey.”

Some people have heard of the Illuminati from hip­-hop, or they may have encountered the Rosicrucians in a book or movie. What are the prank origins of these so-­called “secret societies”?

The Rosicrucian Brotherhood was invented in the early seventeenth century by Protestant pranksters in 1614. Their anonymously published “Rosicrucian Manifestos” were intended to stir up a public debate about scientific and theological ideas that the Catholic Church opposed. The Rosicrucian myth created the template for virtually every occult conspiracy theory that followed: an elite body of initiates—a satanic secret society within a secret society, sometimes known as the Illuminati—that wants to overthrow the established religious­political authority and create a New World Order.

Why do people put so much credence in ideas that a simple Google search can debunk?

Belief systems are powerful. People fall for pranks, hoaxes, cons and conspiracy theories when they confirm their deep­seated worldviews. Conspiracy theories are inherently non­falsifiable, and any attempt to disprove them is considered suspect.

What sparked your interest in pranks?

When I was a twenty­ year-old college student, I created a fictitious movement to change my school mascot to a three-eyed pig with antlers. It snowballed from the campus newspaper to regional news media, eventually landing on CNN. Reflecting back on the mascot changing prank, it helped me understand how trickery can shape mass media and, to a certain extent, how we perceive the world. It was my first dive into the prankster pond, and I was never the same.

You’ll have to ask him yourself.