The secret thrill (and open terror) epidemiologists feel in an outbreak is nothing more than defeat disguised as heroism.

Almost the entirety of the profession is presently organized around post-hoc duties, much like a stable boy with a shovel following behind the elephants at a circus. Under the neoliberal program, epidemiologists and public health units are funded to clean up the system’s mess, while rationalizing even the worst practices that lead to many a deadly pandemic’s emergence.

In a commentary on the new coronavirus, one Simon Reid, a professor of communicable disease control at the University of Queensland, instantiates the resulting incoherence.

Reid pings from topic to topic, failing to weave a whole out of his technicist observations. Such folly isn’t necessarily a matter of incompetence or malicious intent on Reid’s part. It is more a matter of the contradictory obligations of the neoliberal university.

U.S. leftists recently joined swords over the existence of the professional-managerial class. Jacobin social democrats rail at the capitalist professional-managerial class (PMC) they angle to join in a Sanders administration, while tankies claim managers are proletarian too. I’ll sidestep the metaphysical debate—how many PMC can dance on an epipen?—only to observe that whether the PMC theoretically exists in epidemiology, I’ve met its members in the flesh. They live!

Reid and other institutional epidemiologists are on the hook for cleaning up diseases of neoliberal origins—yes, including out of China—while meting out comforting platitudes that the system that pays them works. It’s a double bind many practitioners choose to live with, nay, prosper from, even should the resulting epidemiologies threaten millions.

Reid here kinda gets the food system and conservation parts of the explanation for 2019-nCoV (and many of its celebrity forerunners out of the series of epidemiological reality shows run this century so far). But in introducing this protopandemic, he propositions, to paraphrase, that “This utter horror has a saving grace—hooray!” And it is that “China has been a source of repeated outbreaks, but it, and a WHO now owned by philanthrocapitalism, conducts exemplary biocontrol.”

We can reject Sinophobia, offer material support, and still well remember China covered up the SARS outbreak in 2003. Beijing suppressed media and public health reports, allowing that coronavirus to splatter across its own country. Medical authorities one province over from an outbreak didn’t know what their patients were suddenly showing up with at the ER. SARS eventually spread across multiple countries as far as Canada and was barely driven to extirpation.

The new century has meanwhile been marked by China’s failure or refusal to unpack its near-perfect storm of rice, duck, and industrial poultry and hog production driving multiple novel strains of influenza. It is treated as a price for prosperity.

This is no Chinese exceptionalism, however. The U.S. and Europe have served as ground zeros for new influenzas as well, recently H5N2 and H5Nx, and their multinationals and neocolonial proxies drove the emergence of Ebola in West Africa and Zika in Brazil. U.S. public health officials covered for agribusiness during the H1N1 (2009) and H5N2 outbreaks.

Perhaps then we should refrain from choosing between one of two cycles of capital accumulation: the end of the American cycle or the start of the Chinese one (or, as Reid appears to do, both). At the risk of accusations of third campism, choosing neither is another option.

If we must partake in the Great Game, let’s choose an ecosocialism that mends the metabolic rift between ecology and economy, and between the urban and the rural and wilderness, keeping the worst of these pathogens from emerging in the first place. Let’s choose international solidarity with everyday people the world over.

Let’s reintroduce natural selection as an ecosystem service and let our livestock and crops reproduce on-site, whereby they can pass along their outbreak-tested immunogenetics to the next generation.

Maybe I’ve been unfair to the Reids of the world, who as a matter of professional obligation must believe their own contradictions. But, as five hundred years of war and pestilence demonstrate, the sources of capital that many epidemiologists now serve are more than willing to scale mountains made of body bags. 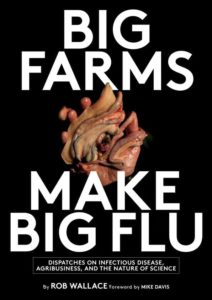 Rob Wallace is an evolutionary biologist and public health phylogeographer presently visiting the Institute for Global Studies at the University of Minnesota. He is author of Big Farms Make Big Flu and the soon to be published Revolution Space, both published by Monthly Review Press. He is co-author of Neoliberal Ebola: Modeling Disease Emergence from Finance to Forest and Farm, and Clear-Cutting Disease Control: Capital-Led Deforestation, Public Health Austerity, and Vector-Borne Infection. He has consulted for the Food and Agriculture Organization of the United Nations and the Centers for Disease Control and Prevention.