U.S. nursing home residents are treated like human ATMs, used to maximize revenue and profit while trapped in substandard conditions. Now, as Covid-19 is killing tens of thousands, the industry continues to focus on money over morality.

Even before the pandemic, nursing homes were often providing unsafe care. For example, Maryland is the richest U.S. state. But a 2019 nursing home report card gives Maryland an overall “D” grade, a separate “D” in direct staffing hours, and an “F” for deficiency citations in 96 percent of the state’s facilities. Maryland is ranked ten places behind Mississippi, the poorest state. Further, a 2017 federal report lists Maryland among the worst states in investigating high priority nursing home complaints.

Now, in Maryland and several states, nursing home residents account for over half of all Covid-19 deaths.

Almost 70 percent of U.S. nursing homes are for-profit, and those companies are often purchased by large investment firms – despite reports of significant concern with such ownership. As I explain in The Poverty Industry: The Exploitation of America’s Most Vulnerable Citizens, when nursing home residents are used in strategies to maximize profit rather than maximizing their quality of care, harm results.

An example of such ownership structures involves real estate investment trusts (REITs), which provide tax benefits and liability protection for owners by separating assets from operations. One of these REITs, Sabra Health Care, purchased five Maryland nursing homes in 2015 from NMS, LLC, while contracting for NMS to continue operating the facilities. Sabra’s CEO expressed being “very impressed with the team” because NMS focused on patients with high Medicaid and Medicare reimbursement rates. Then, in 2016, Maryland’s Attorney General filed a lawsuit against NMS, alleging that “NMS’s financial arrangements with Sabra impose substantial additional financial pressure on it to evict nursing home residents as soon as their public health insurance profiles are no longer desirable, without regard to the evictees’ health and safety.”

The complaint alleged that NMS illegally evicted residents and dumped them at homeless shelters and unlicensed predatory group homes – to replace them with more valuable residents with higher Medicare and Medicaid reimbursement rates. In a settlement, NMS agreed to pay $2.2 million and was banned from operating Maryland nursing homes. However, Sabra – the actual owner – faced no liability and simply reopened the facilities with a different operator, Cadia Healthcare. Now, a 2019 federal government list of nursing homes with a “persistent record of poor care” includes two of these Maryland facilities run by Cadia.

Illustrating the focus on revenue maximization, Cadia sought to hire a “floating registered nurse” for its Delaware facilities who “[d]irects and oversees Medicare and Medicaid clinic reimbursement process in all facilities to maximize reimbursement.” Also, nursing home companies often hire revenue maximization consultants to help use residents in strategies to profit from Medicare and Medicaid, which can lead to False Claims Act allegations in billing for “materially substandard” and “worthless” services.

Further, state and local government entities also use nursing home residents in revenue schemes. Maryland and several other states created an illusory bed tax strategy, ironically called a “quality assessment,” to increase federal Medicaid matching payments without additional state spending – and then much of these funds intended for nursing home care are instead diverted to general state coffers. Similarly, Texas and Indiana let their hospital districts – considered local government entities – buy up private nursing homes, simultaneously hire companies to operate the facilities, and then divert much of the federal Medicaid payments intended for nursing home care to other uses. Texas and Indiana both received “F” grades in the nursing home report card.

Thus, for-profit companies, private equity firms, REITs, state and local governments, and even hospital systems have used nursing home residents to maximize profit and revenue rather than maximizing their quality of care. Now, thousands are dying from Covid-19.

At this time of crisis when residents need protection more than ever, oversight and investigations of nursing homes have been curtailed. Nursing home owners are seeking immunity from legal liability. And the Trump administration is actually seeking to roll back regulations of nursing homes, including rules intended to prevent the spread of infections and disease.

The business of nursing homes continues to focus on the bottom line. Sabra’s first quarter 2020 earnings report explains: “Our portfolio is largely needs-based, and we believe there are meaningful demographic tailwinds that will limit the depth and duration of the impact of this pandemic on our business, irrespective of the impact the pandemic has to the overall economy.” While the virus has spread, Monticelloam, LLC, “a specialized private real estate and asset-based lender,” provided hundreds of millions in debt financing for the acquisition of nursing homes in Maryland, Kansas, Arkansas, Virginia, Tennessee, Kentucky, and North Carolina. Meanwhile, a national association for nursing home owners just requested $10 billion in additional federal aid due to Covid-19 – to recoup nursing home expenses and lost revenue. Who will benefit from such money, residents or owners?

This crisis shines a light on systemic failings in how we care for older Americans, the individuals who cared for us. Solutions begin with caring for them rather than using them: increasing rather than decreasing accountability, enforcing rather than relaxing regulations, investigating ownership models that contribute to concerns, and ensuring federal aid actually goes to improved care for nursing home residents. 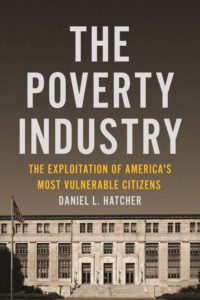 Daniel L. Hatcher ([email protected]) is professor of law at the University of Baltimore and author of The Poverty Industry: The Exploitation of America’s Most Vulnerable Citizens. Find him on Twitter: @povertylawprof.

“Hatcher exposes an urgent paradox at the heart of American governance: why, and how, are states and localities teaming up with corporations to squeeze profits from society’s poorest? The Poverty Industry breaks fresh ground. Every American who cares about the intersection of private profits and public justice should read this book, and wrestle with its arguments. Hatcher marshals years of legal experience and research towards fulfilling the muckrakers calling: ‘to comfort the afflicted, and afflict the comfortable.’ But he also goes a step further. In The Poverty Industry, he combines a practitioners depth with a journalists flair for storytelling, to generate the first complete account of a little-known phenomenon that should be of interest to every reader with a conscience.”—Sarah Stillman, staff writer for The New Yorker