On April 17th, 1916, New York University Press was founded by action of the University Council’s Board of Trustees. An effort initiated by Chancellor Elmer Ellsworth Brown, who stated its purpose to be: “to publish contributions to higher learning by eminent scholars”.

When the Press was founded, New York University was an institution 86 years young.  With a student body of approximately 9,000, it was one of the nation’s largest universities, and comprised of Colleges of Arts and Sciences, Law, Medicine and Dentistry, Education, Engineering, and Business. New York City and New York University were vastly different one hundred years ago.

Throughout its history, NYU has always held itself to the highest quality of scholarly excellence and the University Press directed itself to echo these ideals. Yet, a Press was a very new endeavor, and one not expected to be self sustaining, therefore it was incorporated with two other functions of the University. In addition to publishing the works of University Scholars, it was tasked with printing syllabi and pamphlets on behalf of NYU. NYU Press also operated the campus bookstore, appropriately named the New York University Press Bookstore. These responsibilities remained under the jurisdiction of the Press until the early 1950s.  By order of the Chancellor, $2,000 was taken from the bookstore accounts to fund the Press.

In 1916, The Committee of Publication at NYU Press consisted of three appointed members, individuals who reviewed the scholarly and literary merits of submitted works. The editorial, proofreading and advertising functions were overseen by the Director and the Manager of the Press. Peer reviewers spoke to the accuracy and importance of the research.

While there have been many institutional and organizational shifts over the last hundred years, distinguished ideas and academic integrity have always been at the core of NYU Press’s work. To celebrate the Press’s centenary, New York University’s Mamdouga S. Bobst Gallery is hosting an exhibition that tells the story of the Press through the lens of the University’s history, and the many published works that have entered the canon of scholarship. 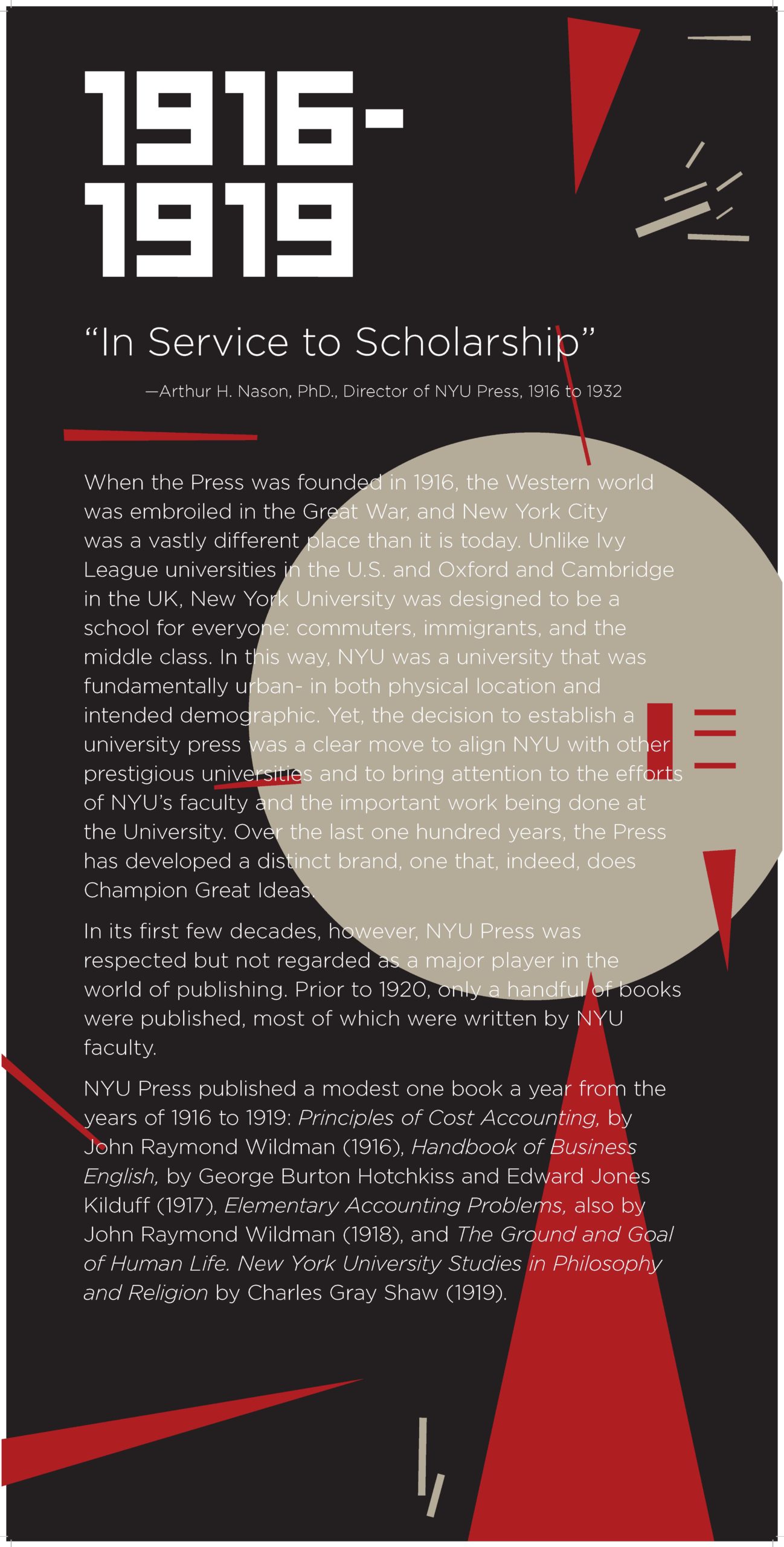 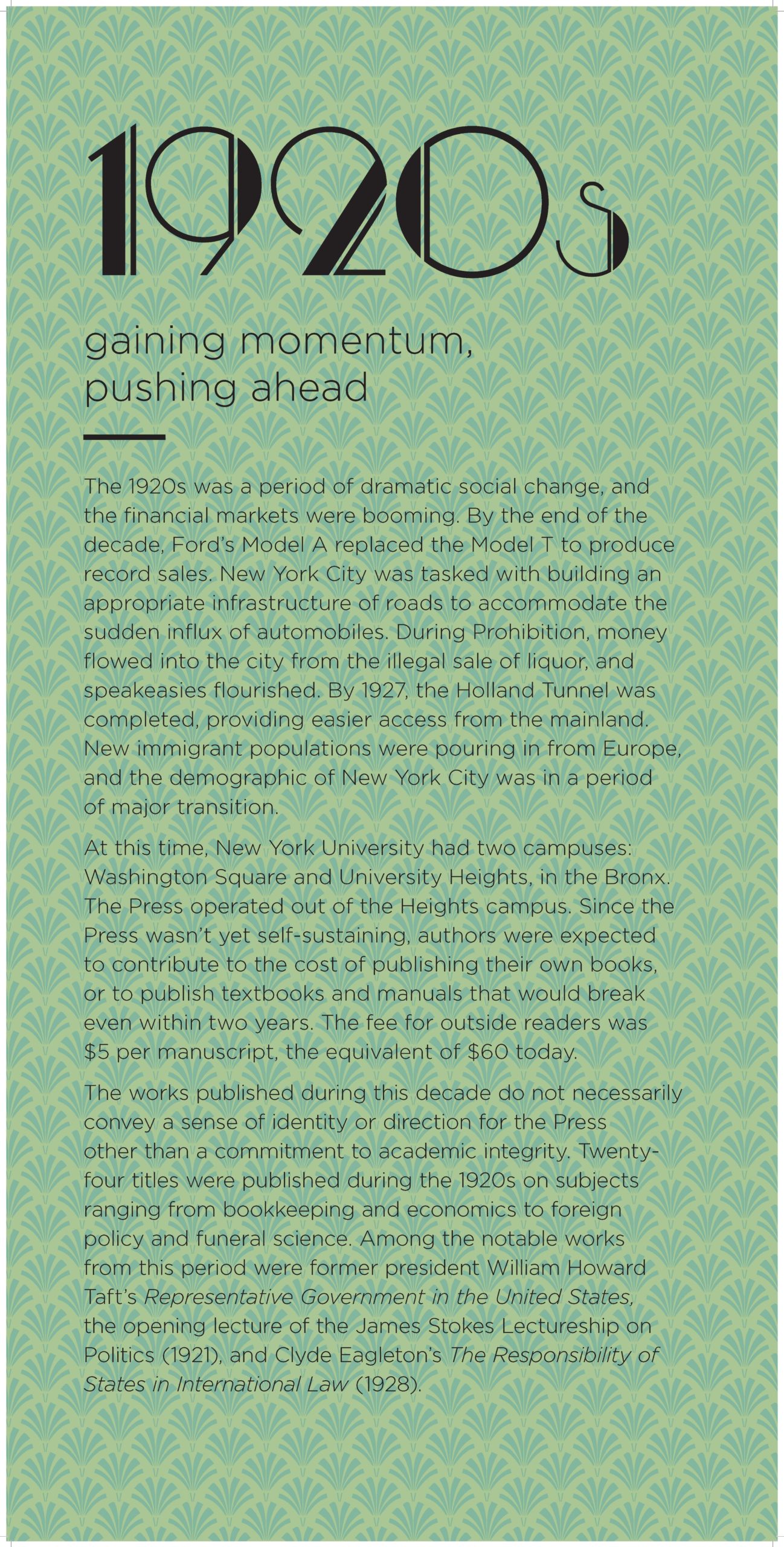 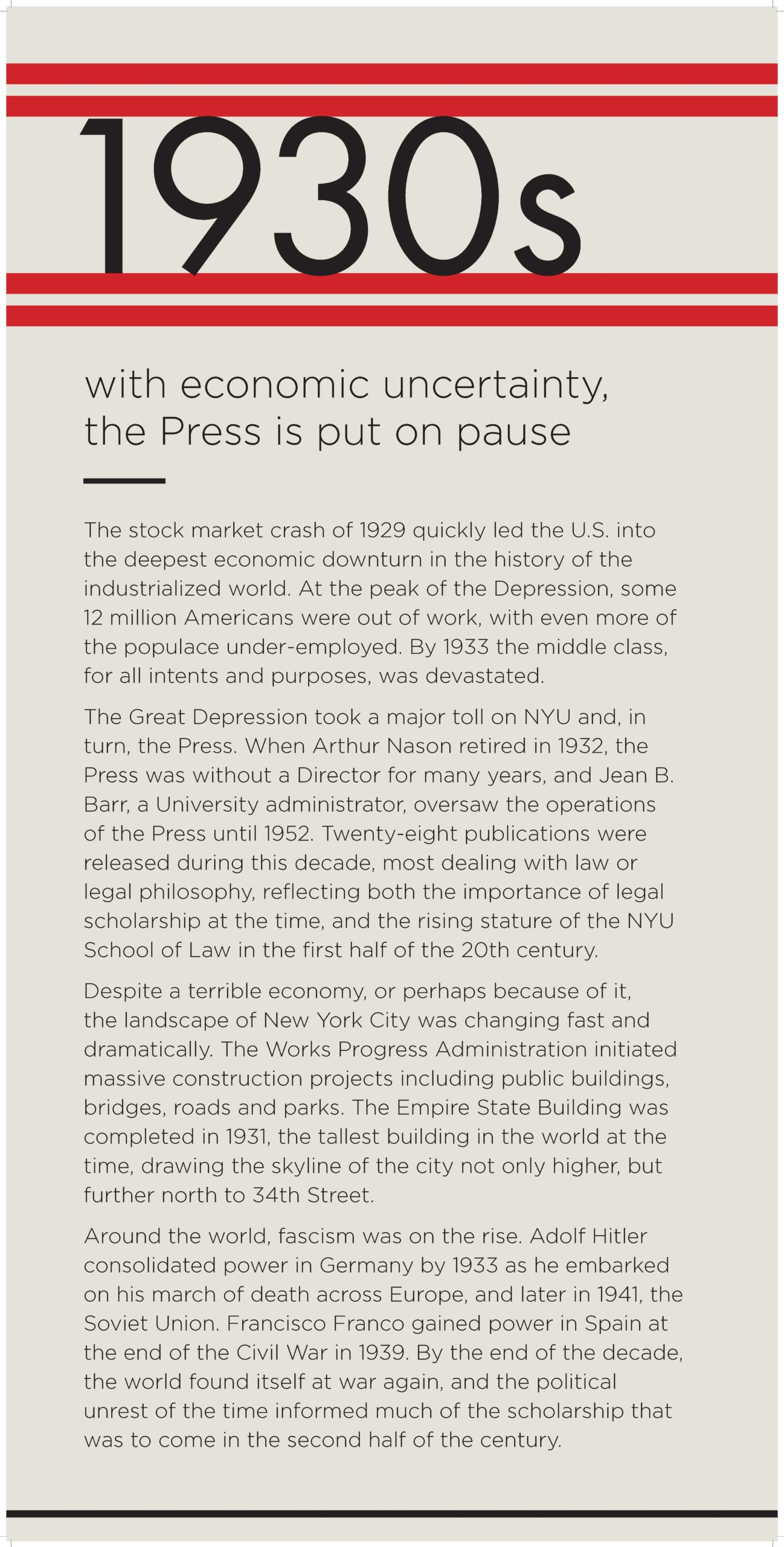 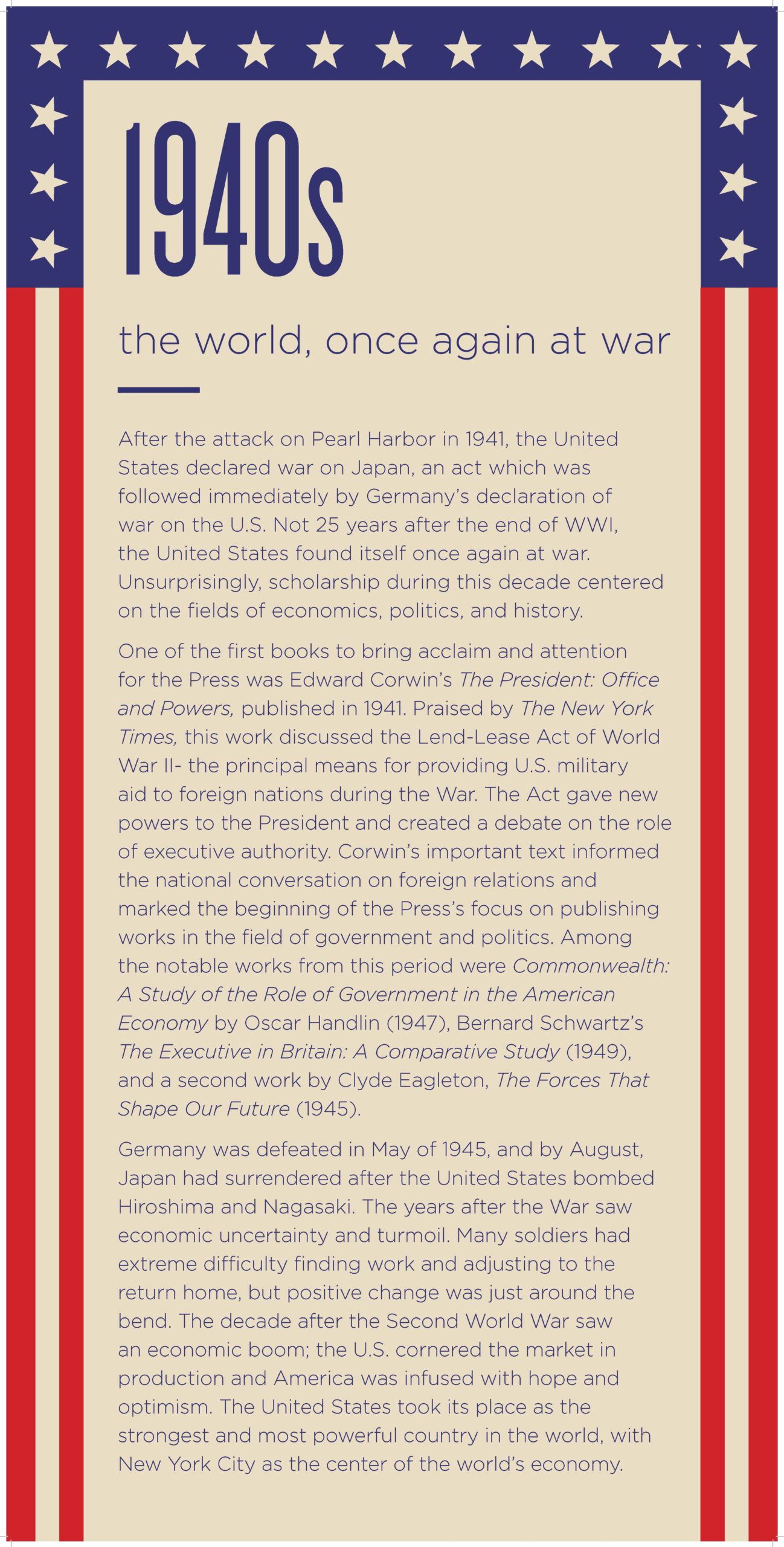 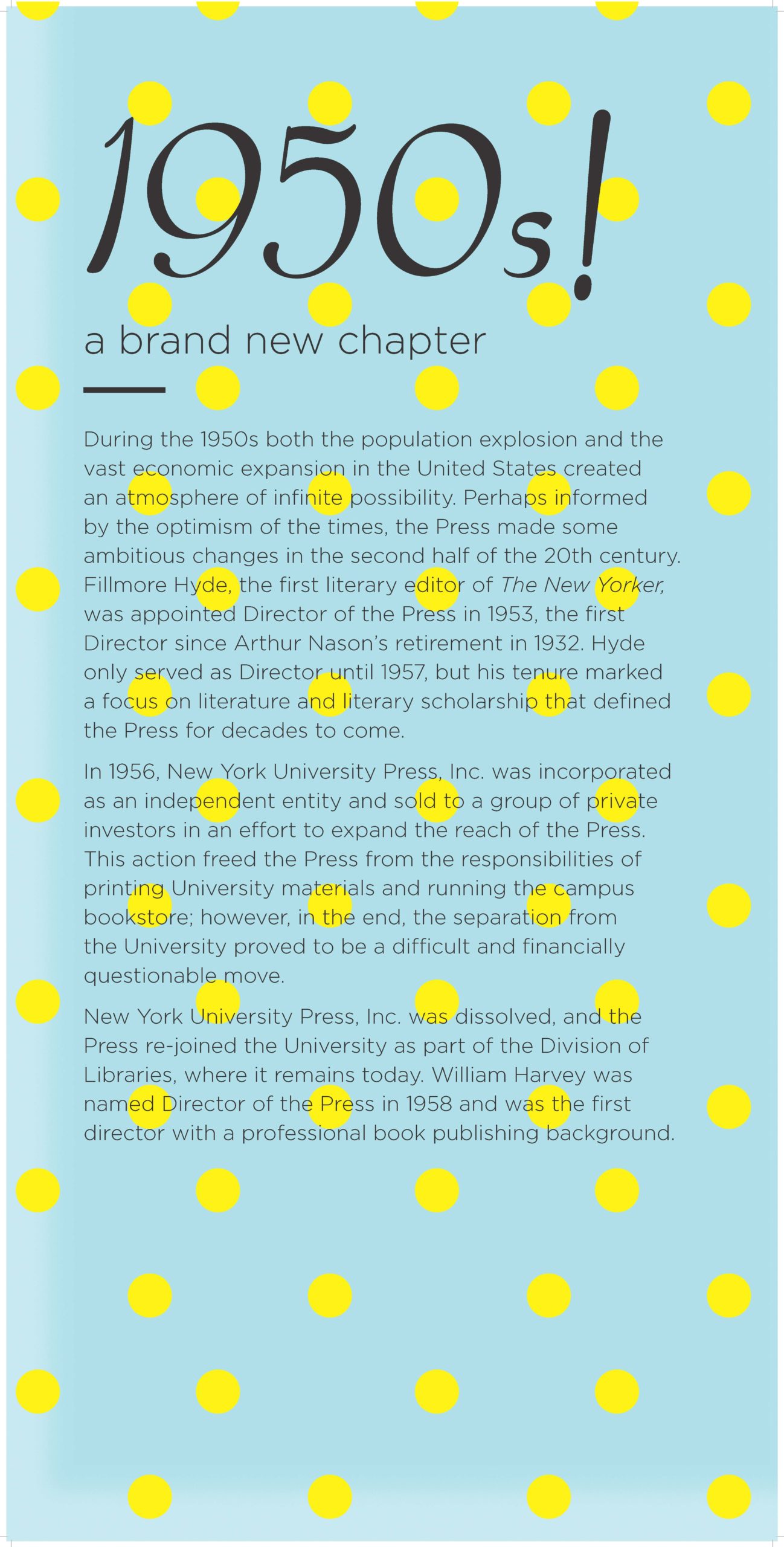 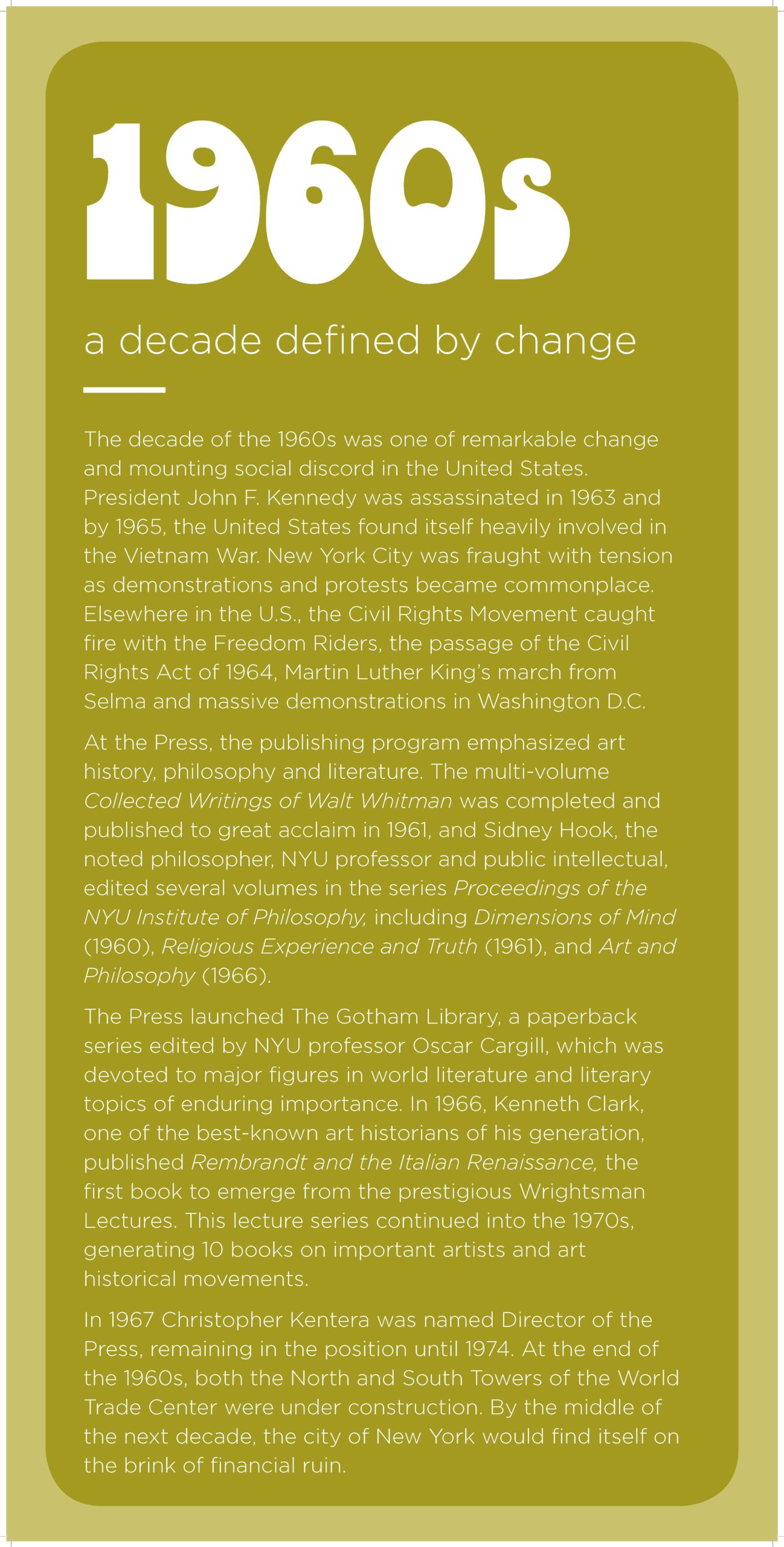 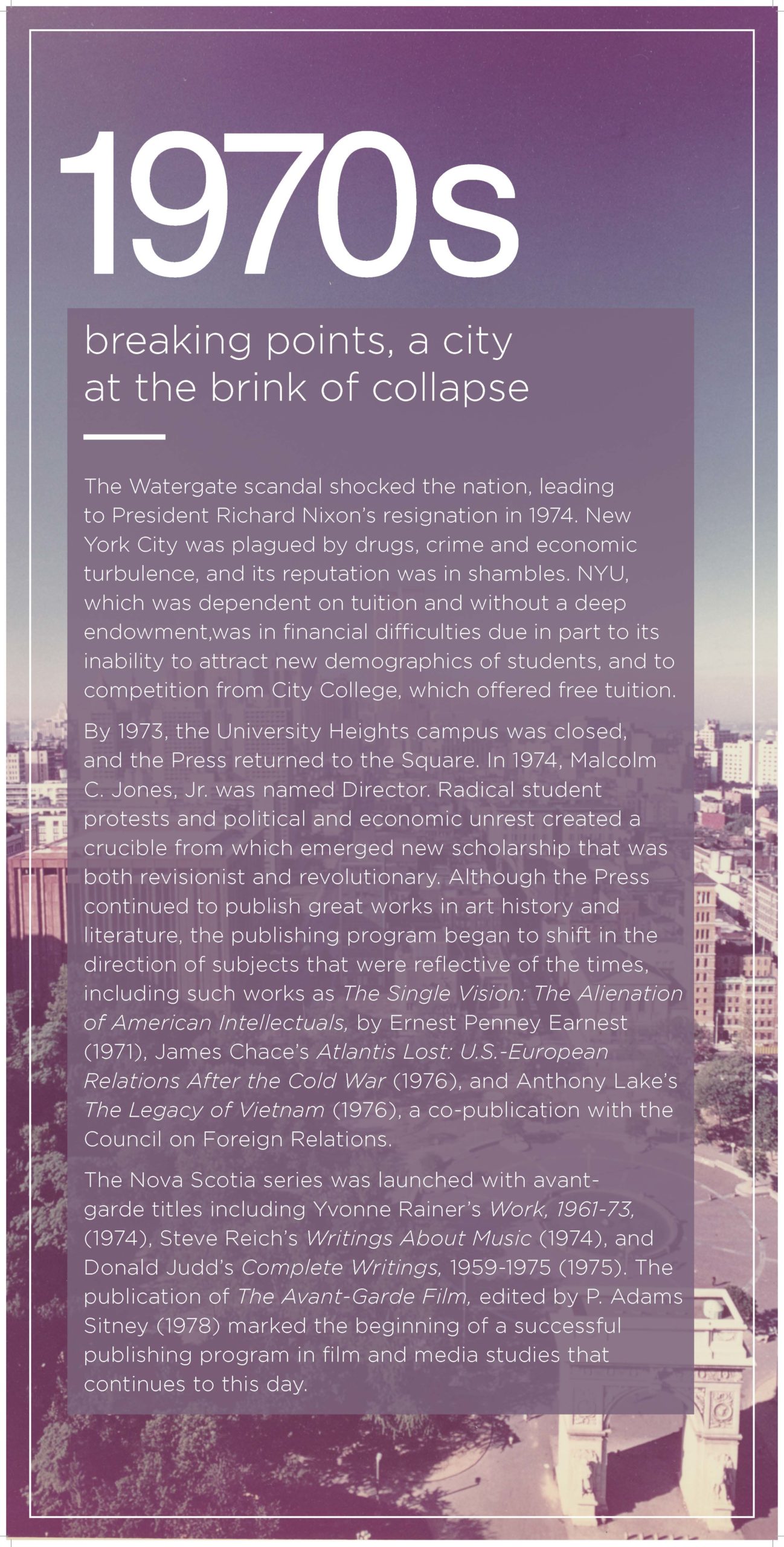 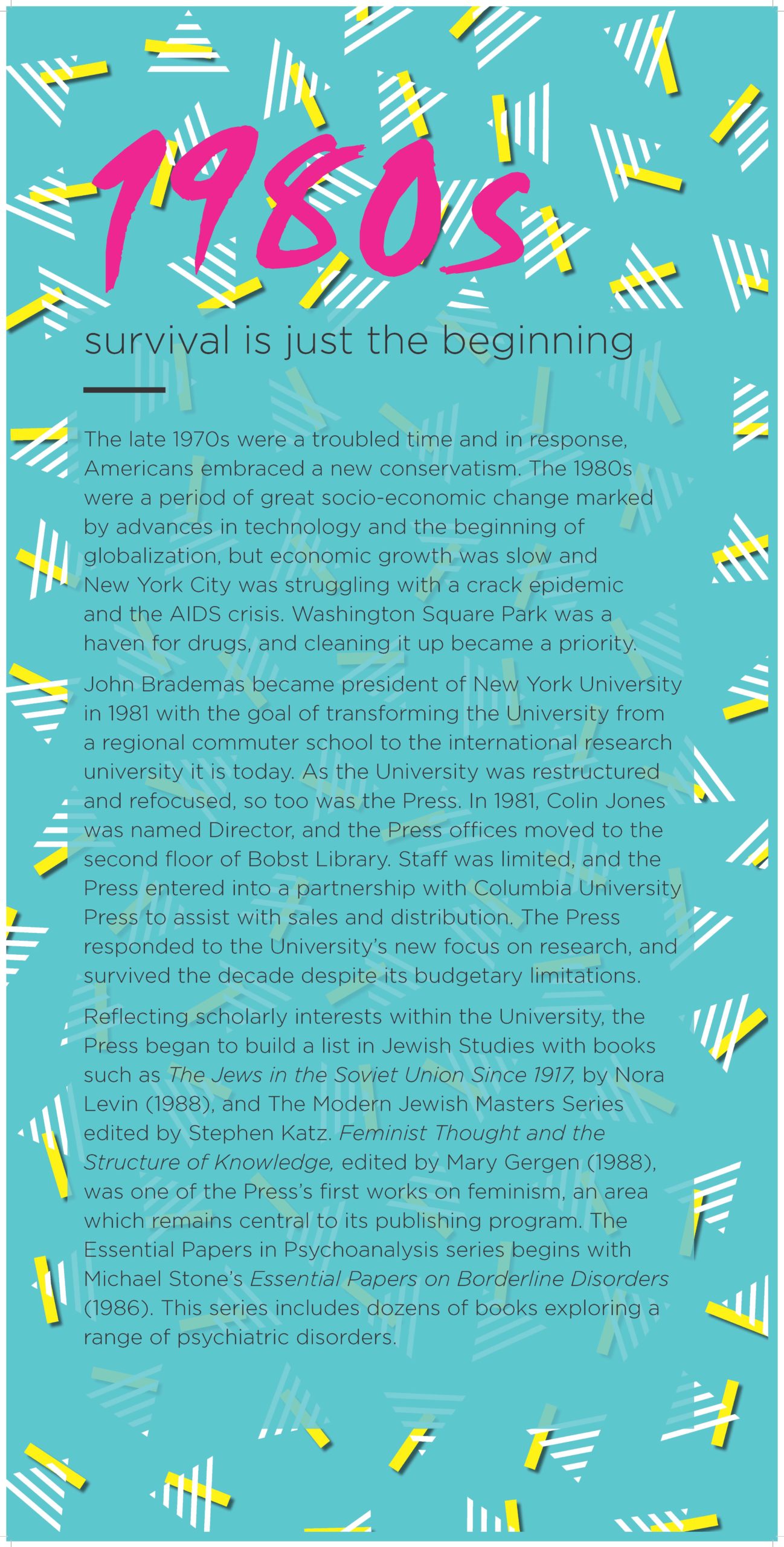 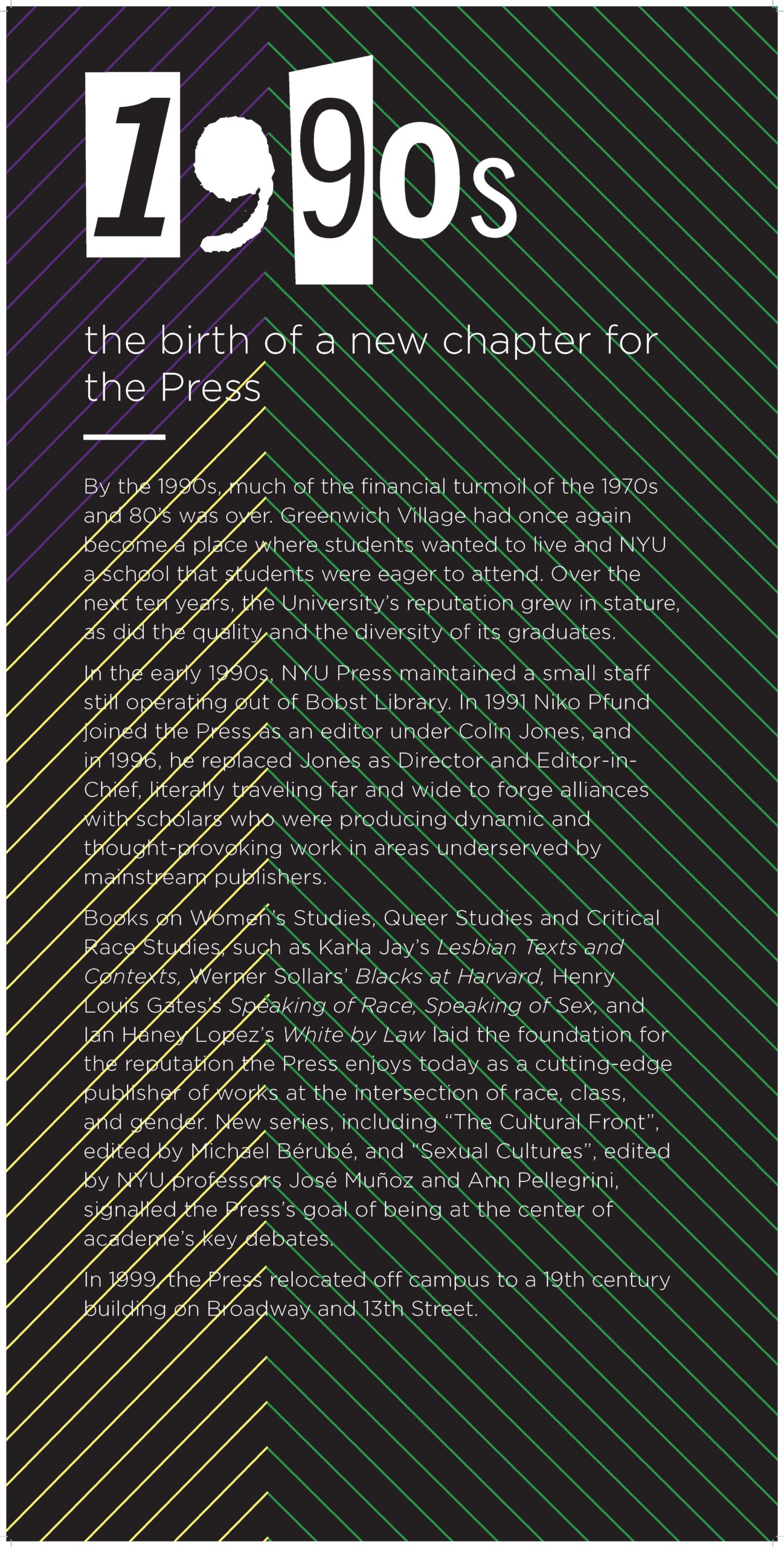 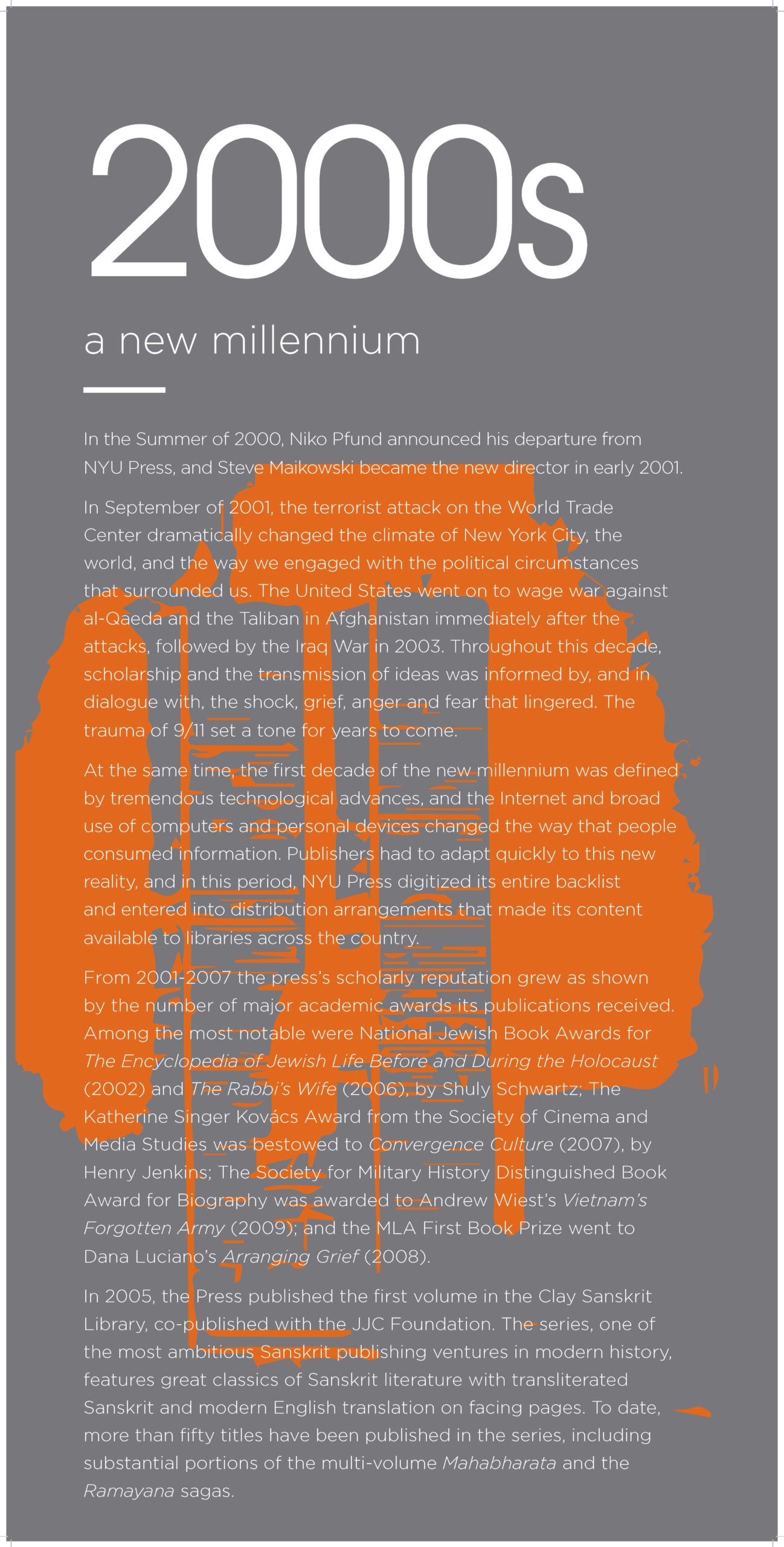 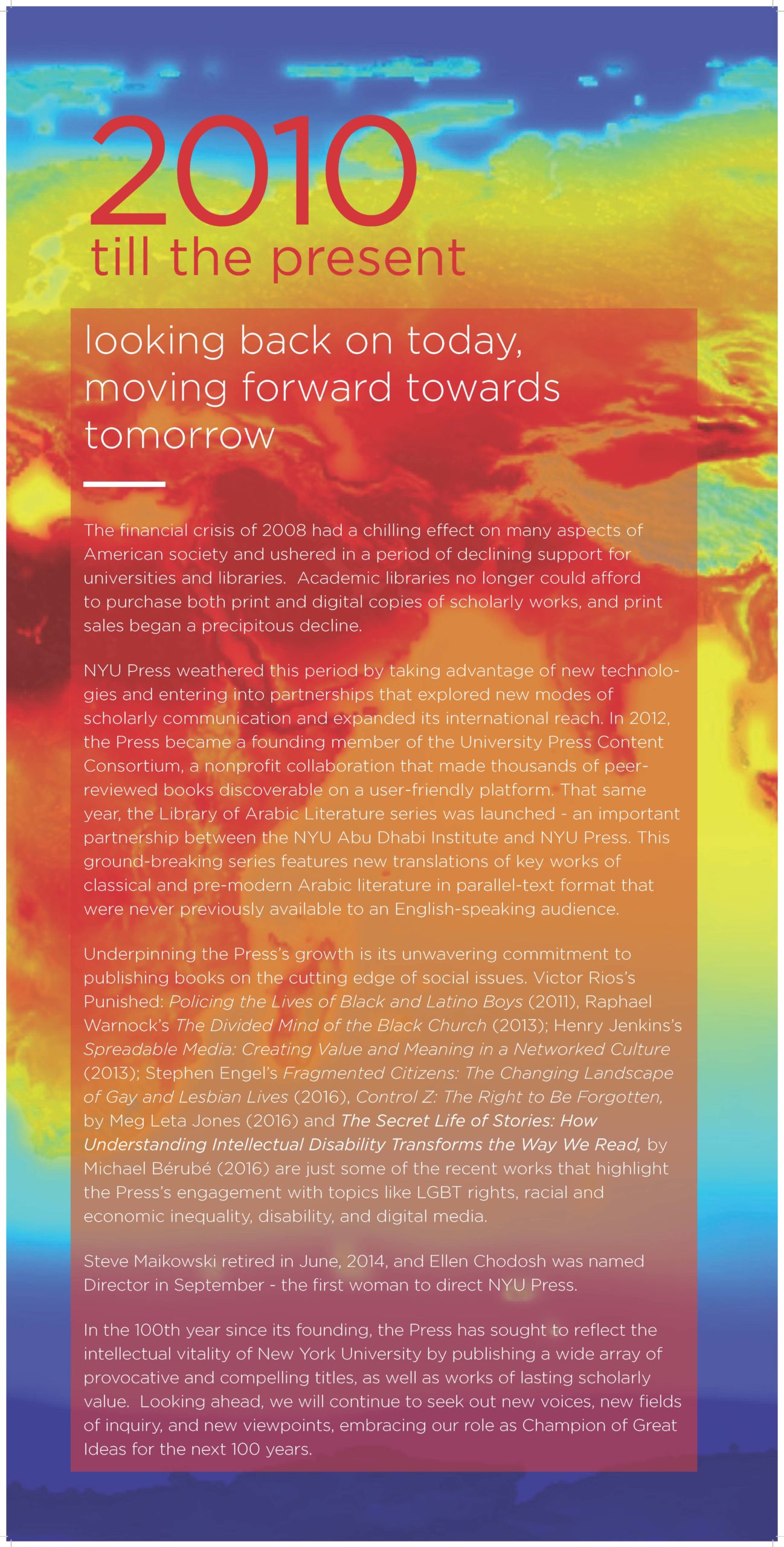 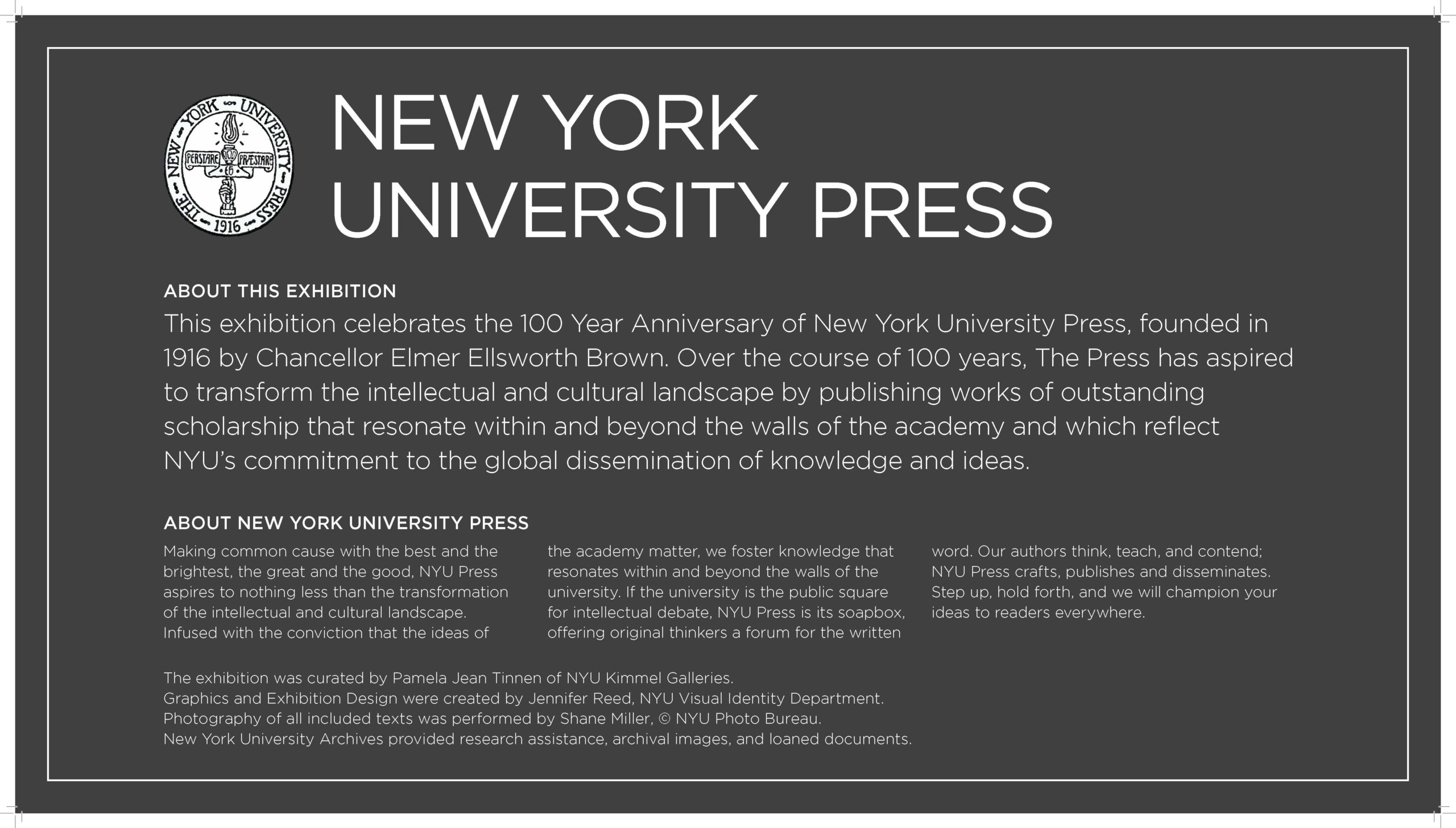