Tuesday’s election gave President Obama a second term in the White House. In a CNN.com article by Moni Basu, Shayne Lee, NYU Press author and Associate Professor of sociology at the University of Houston, looks at what four more years means for the President. 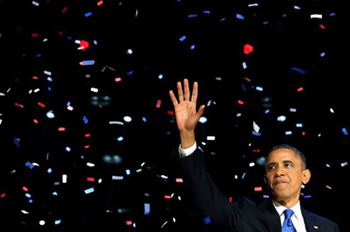 A black man is returning to the White House.

Four years ago, it was a first, the breaking of a racial barrier. Tuesday night, it was history redux.

In the midst of national splintering and a time of deep ideological animosity, Americans elected President Barack Obama to a second term. And thousands rejoiced in his victory, one that seemed sweeter and, perhaps, more significant.

“This is affirmation that his color doesn’t matter and that his message resonated with people,” said Yale University sociologist Jeffrey Alexander, author of “Obama’s Victory and the Democratic Struggle for Power.”

“It is very important in that it will indicate that an African-American can be viewed for what he says and not what he is.”

Had Obama lost the election, he would likely have been remembered in history as the first black president, and maybe little else, Alexander said.

Now, he has a chance to create a legacy rooted not in his identity, but in his ideas.

“If this country wants President Obama to have another term, I’m ready to say that it’s a significant moment,” he said.

As an African-American, Lee understood the power of 2008. But his excitement was measured.

He knew the nation was tired then of two costly wars in Afghanistan and Iraq, a sinking economy and an administration that he felt excluded ordinary people. He thought Arizona Sen. John McCain was a weak candidate and that the cards were stacked in Obama’s favor. Four years later, Obama traversed a much tougher road, Lee said.

Americans had a strong alternative in the Republican challenger, former Massachusetts Gov. Mitt Romney. The nation, he felt, was no longer in a desperate state and voters had more of a choice. Despite that, they elected a black man. Again.

“They sent a message to the world that whatever racist proclivities might exist are not enough to preclude Obama from winning,” Lee said.

“We cannot deny that this is new social space we occupy in this country.”

A changing America, Lee believes, will be very much a part of Obama’s national conversation in a second term. That includes a stronger stance on race relations, an issue some believe Obama had to distance himself from in his first term for political expediency. For that, he drew criticism from African-Americans with high expectations of a black president.

“Can you imagine knowing you’re the first black president and you have to win the Midwest to win a second term?” he said. “It’s such a thin thread that holds together his ability to win as a black candidate.

“The constraints are not going to be there in his second term. He’s going to have much more swagger.”

This article originally appeared on CNN.com. Read the rest of it here.