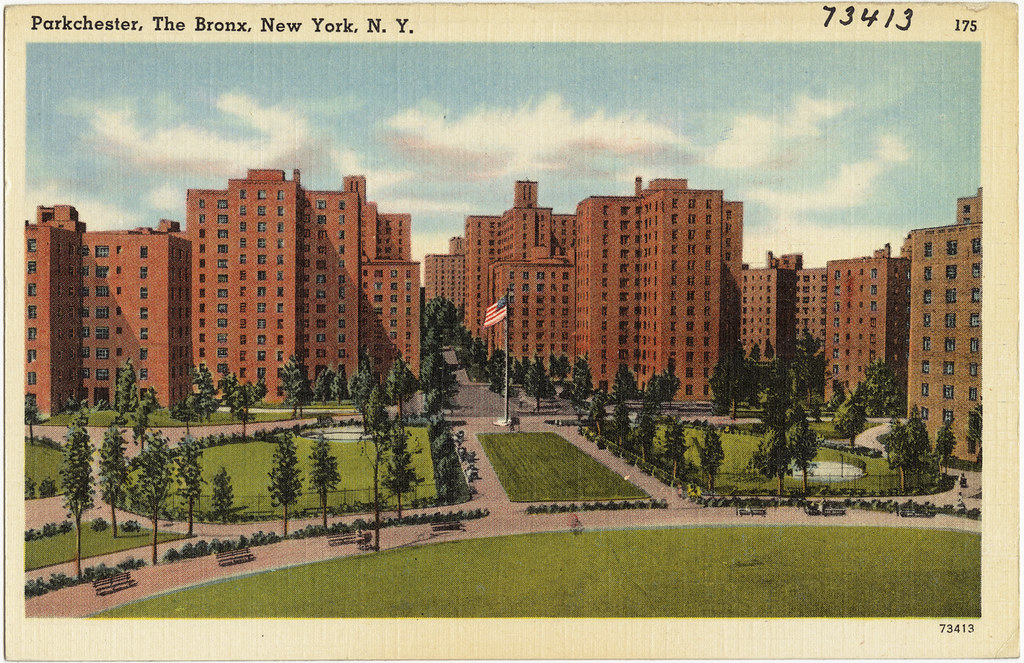 In writing Parkchester: A Bronx Tale of Race and Ethnicity, I challenged myself to come to grips with some basic truths about the eighty-year history of an East Bronx community. As the book description unabashedly notes, I am “a child of Parkchester;” I lived there for the first quarter century of my life. Thus, I came to this project with a set of recollections, experiences and perhaps prejudices, which needed to be dispassionately tested for their validity against what other people recalled from interviews and memoirs and from documentary evidence. The results that arose from testing myself informed this 300-page book even if strategically, due to the expert advice of my sagacious editor, I did not reveal my Parkchester roots until the last pages of this history. There, using some present day anecdotes, I spoke of my sense of both continuity and change within my old neighborhood over the long haul and argued strongly that the residents whom I met towards the end of the 2010s are so similar in outlook and attitude to my family and friends whom I knew and loved in our special East Bronx community. Truth be told, that is the consummate truth of this book.

But now, as this book has hit the streets, I wish to double back and elaborate on three central themes in the work where I tested my memories and ultimately arrived at some crucial conclusions. These findings are crucial for understanding Parkchester’s history and I risk saying are also worthy of a comparative look-see in other places as well.

The first recollection that required interrogation stemmed from the absence in my memory bank of any fear of street anti-Semitism; a perspective that is critical to sustain my Parkchester “get along” argument about the tenor of life where I grew up. I do remember an incident when I was perhaps 7 or 8 years old when my brother came home from the playground and told my father that a local bully –who just happened to possess an Irish surname- had thrown his rubber ball-what we called a “spaldeen”- over the roof of the parking garage that abutted the basketball courts. Recently, I returned to the old neighborhood and realized that his throw was not exactly a great athletic achievement. In any event, my father a tough guy, a strong firefighter, and a former amateur wrestler, proceeded to go out into the street, found the offender, punched him in the face and got a quarter from him for a replacement ball. This was 1950s Bronx street justice pure and simple. Indeed, the nasty kid told neither his parents nor the Parkchester cops nor the NYPD about the incident. However, red-faced he may have told his friends about the encounter because the word got around and for the next spate of years, whenever the Gurock boys played in the West Quadrant playground, troublemakers of all ethnicities stayed clear of us. For me, what is most important about this tale is that we did not feel that the “attack” against my brother was an anti-Semitic act; the bad youngster picked on all sorts of weaker boys. And my father did not feel that he had punched an Irish bully; his ethnicity was not in play. After all he served in the firehouse and sat untroubled at the same tables with Irish-American men all the time. At the same time, although we had a friendly tip the hat nodding relationship with our Irish neighbors and being sports fans, we were excited that an outstanding St.Helena’s ballplayer nicknamed Wee Willie [Bill] Walsh who lived in our building, matched up against Lew Alcindor—later known as Kareem Abdul Jabbar – before Walsh matriculated at St. John’s University, we never hosted the Walsh family into our apartment at 1470 West Avenue and they never welcomed us into their place.  These memories contributed to the personal perspective on Jew hatred vs. inter-group conviviality that I brought to the book. But was my family experience unique or typical; that was the challenge? Especially when a Jewish friend of mine, also of Parkchester vintage, has persistently asserted to me that: “while the Italians in the neighborhood liked us Jews, the Irish did not.”

As it out turned out, to buttress my impressions I found out, to begin with, that a historian, who has done research on youth gangs in the Bronx after World War II, has determined that there were no such violent predators on the prowl against kids like us as was the case in other localities. Thus, the Gurock boys had nothing to fear in this area. Then there were the newspaper reports of the time that noted the surnames of the Greek, Italian, Irish, Jewish, and other white ethnic New Yorkers whom it suggested lived contently in the new neighborhood. Eventually, I read memories of other erstwhile Jewish and Christian residents who seemingly were more open to other folks than we were. These were the apartment dwellers that opened their doors for cross ventilation during the long hot summers in Parkchester and eventually got to know one another better. Perhaps the Gurocks did not behave that way because like many other Parkchesterites we were fortunate to take off to a bungalow colony in the summer and were spared the heat of the city. It remained, however, for a comment made by an Irish-American writer of the same age as me who has written evocatively about his life in Parkchester that convinced me that my memories held true. Peter Quinn has written that while there were no “Irish Pogromists” –his words not mine – out to beat up Jews in the end we lived “separately together.” This reportage about Parkchester suggests a periodization worthy of testing elsewhere towards determining when, how, why and to what extent relations among white ethnic groups improved after World War II.

The second memory that surely required additional thought concerns my attitudes and those of my fellow whites in the neighborhood towards race and integration. We were a family that supported the civil rights movement. So disposed, we were heartened when we watched from the comfort of our living room the image, on our flickering black and white tv screen, of Rabbi Abraham Joshua marching in Selma, Alabama with Dr. Martin Luther King Jr. And we were deeply troubled when we read about the murdering of three civil rights workers, two Jews and one African American in Philadelphia, Mississippi. But I grew up oblivious to the fact that our Bronx neighborhood was also segregated, not by law but by custom and the subterfuges of the owners of the 171 building complex. In other words, it never crossed my mind that out in the playgrounds there were nice and nasty white Christian kids but no blacks. And idiosyncratically, since my brother and I went as scholarship students to a preppy Jewish day school in Manhattan, when we took the express train out of Parkchester, we, and the other straphangers, skipped over minority neighborhoods in the Bronx and were quickly in predominantly white Yorkville. So how unique were the Gurocks among our neighbors? Here my interviews and reading of newspapers and memoirs have convinced me that most Parkchesterites-Jew and white gentile alike – were like us. They went about their daily activities in the 1950s and 1960s, on our streets or in our play areas – perhaps aware of race problems elsewhere but detached from this central crisis of our times. Ultimately, my take away from this confirmed point of view is that it is essential to teach how long our city was de-facto segregated and that the story of white reactions to integration must include consideration of not only strident opponents and committed advocates but also the life story of those who simply lived out their lives comfortably and for the most part were not tested.

So why did the second generation of Jews and whites of other ethnicities leave in large numbers beginning with the 1970s concomitant with the opening up of the neighborhood to minorities. Again, if my and my brother’s feelings and experiences are emblematic, the facile terminology of “white flight” needs serious revision as it applies to Parkchester and perhaps elsewhere. Our parents were lower middle class people. Our mother was a bookkeeper who worked at the Empire State Building albeit with one of the worse views of the city. The firm was on the third floor.  My college-educated brother and I aspired to live in a more upscale neighborhood. A budding newspaper editor and ultimately a tv news producer, he and his wife and family ended up in Hartford Conn and later in New Jersey. Soon after my wife and I married a fellowship took us to Cincinnati and, two years later we joined the hegira to Riverdale; part of the brain drain away from the synagogue of our youth that is described in the book. Significantly, before we left for Ohio, we lived in my parent’s apartment in July 1974. My wife who lived in an air-conditioned apartment on Manhattan’s West Side could not believe how we possibly could live in that “hot house.” We quickly moved out. Here admittedly, some of Parkchester’s first African Americans, who I interviewed have, memories –their own “truths”- and have spoken of white flight and of the “7 Santini” moving van trucks outside of the apartments of erstwhile white folks. Still, my research, again through interviews, memoirs and contemporary newspaper accounts speak more of second generation white economic mobility-that sort of privilege – pulling them away from the old neighborhood rather than fears and hatred pushing them away.

I suppose that the challenges that I embraced may well resonate with all historians of modern times who take their work up to the preset day. I often kibitz with my medievalist colleagues at Yeshiva Unversity that when they quote a teaching of a renowned 12th-13th century rabbi, no one gets up in the audience and grumbles: “I heard what Maimonides said and you have it all wrong.” We modernists, on the other hand, who speak about contemporary times, run the risk of questioners arguing that we have seriously misheard or, more critically, misinterpreted the truth that well known spokespeople have articulated about issues that presently weigh upon all minds. Those who challenge us may in the end be incorrect, and may be shown the error of their recollections, especially if a transcript exists. But I recognize and respect nonetheless that they possess their own personal truths which they may be unwilling to abandon but which I as a scholar must take in account. Still in another very different way, I have ultimately one advantage over my medievalist colleagues. Even with the book completed, my research can continue. I look forward to taking my stories out on the stump to hear more about the lived lives of past and present Parkchesterites.  After all, while Maimonides can be studied, he cannot be interviewed. 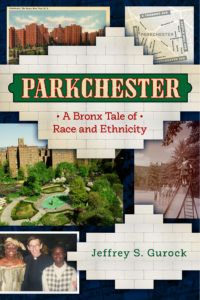 Jeffrey S. Gurock is Libby M. Klaperman Professor of Jewish History at Yeshiva University. A prize-winning author, he has written or edited fifteen books in American Jewish history. Gurock has served as chair of the Academic Council of the American Jewish Historical Society and as associate editor of American Jewish History. He lives with his family in the Riverdale section of the Bronx. His latest book is Parkchester: A Bronx Tale of Race and Ethnicity, now available from NYU Press.

2 thoughts on “On Writing About My Neighborhood: Method and Memories”