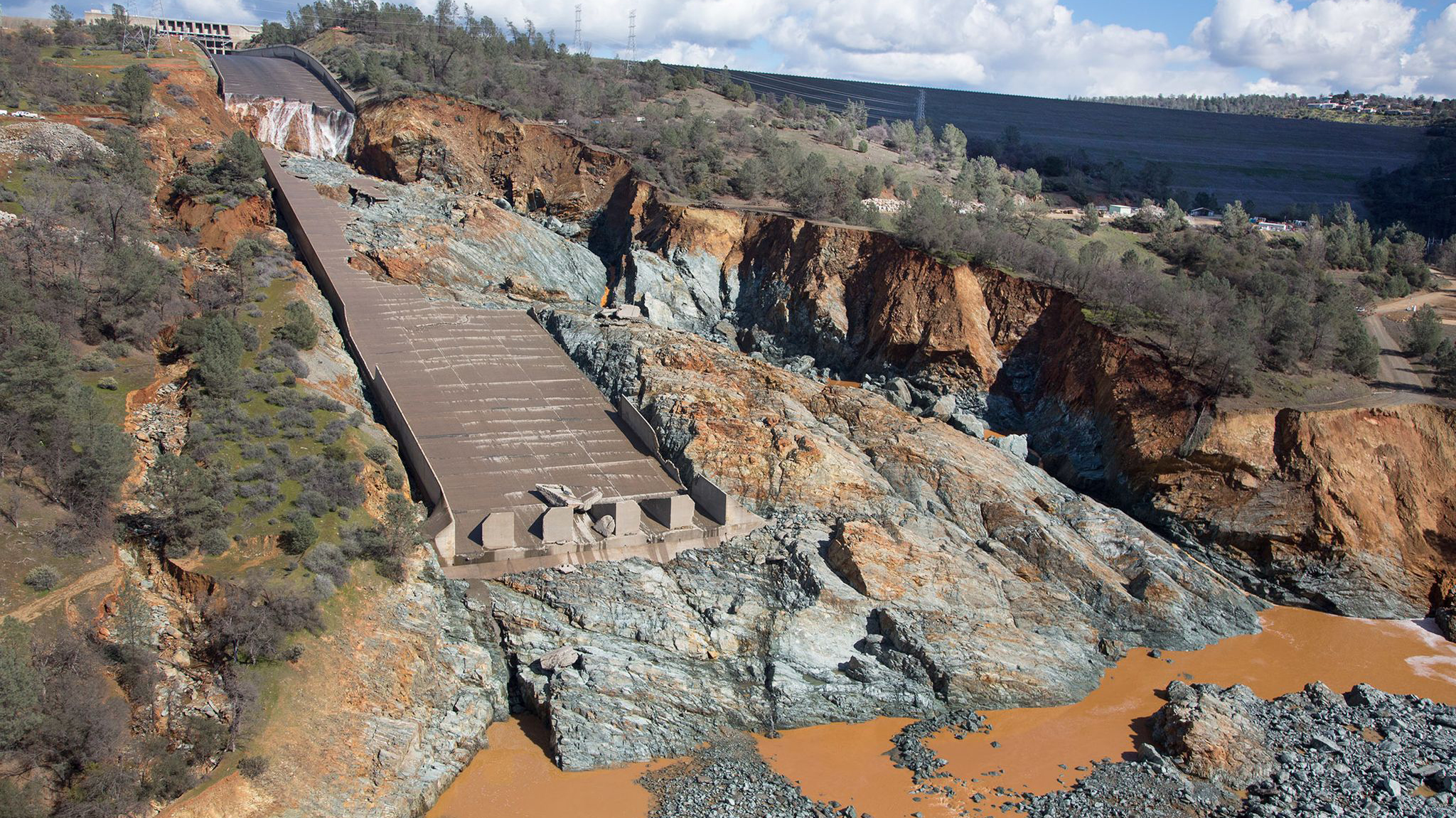 Jerry Brown must sometimes wonder why he isn’t called the water governor. In the 1970s he presided over a severe drought in California. Forty years later, he was governor again. The water? Gone once more. Both droughts eventually subsided—although subsided doesn’t capture the events of this past spring when intense rains pushed America’s tallest dam into code red.

The Oroville Dam towers 770 feet (225 meters) above where the water in its reservoir would like to rest. Even this colossal structure, however, proved no match for the new normal in which climate change can deliver water with a fire hose. As rain fell and water rose, the dam’s spillway was opened to relieve the reservoir. Soon, however, the scouring water eroded a large sinkhole in the concrete waterslide. As the sinkhole began to erode uphill towards the reservoir it forced a choice: close the spillway and let the waters keep rising or keep it open and hope erosion stops short of undermining the dam itself.

The spillway was shut, and engineers, politicians, and the 200,000 people evacuated downstream watched and listened nervously as the water bulged against earthen and concrete bulwarks. As the water breached the reservoir’s capacity the first drops began to trickle over the erstwhile engineering marvel. Then the torrent came. Water mixed with rocks and debris to overwhelm downstream waterways and wash away critical aquatic habitat. The only relief came by chance when the rains stopped before erosion from the overtopped dam ate into its foundations.

The Oroville Dam episode lies somewhere between bellwether and dodged bullet. On one hand, there is a flock of failing infrastructure potentially set to follow it. On the other, this acute crisis must be seen in the context of a now chronic mismatch between the ideas used to manage water and the environmental triggers being pulled by human pressure on the planet’s water. There are no small stakes in the matter. The price tag to repair Oroville Dam hovers near $275 million; but the cost of continuing to manage water under assumptions of climatic stability will almost certainly not stop there. It is a hydrological harbinger; globally, climate change will put trillions of dollars of global assets at risk in addition to altering the conditions affecting earthly life.

Contemporary water problems, however, aren’t the latest episode in epics of water and nature. They also don’t fit standard explanations that plot events like those at Oroville Dam on a bell curve modeled on normal variability. Something more troubling, and more demanding of explanation, is afoot.

What is fundamentally amiss is that the model used to deal with water’s chance events has been called out not only because it is inadequate to the challenge of climate change, but because it also had (and contin

ues to have) a role in creating the problems it seeks to solve. Historically, water management in America was based on a peculiar cultural myth in which dams like Oroville were not just good for society but demanded by evolution itself—they were good, on this account, for the planet. Ironically, this myth is now being called out by water itself.

Water treats truth and fiction alike: relentlessly. In an age when climate change sends torrential rains on good ideas and bad, and likewise withholds waters with equally impersonal disdain, many claim our current situation is so novel that we should wipe the slate clean—start anew with a full view of humanity as a planet shaping force. Surely we need new ideas, but they are going to play out on a landscape built by those previous. The Oroville Dam cannot be abandoned as it stands. Yet it is not sufficient to merely patch the problems when water’s erosive force is set to undermine the foundations of both material and myth.

Jeremy J. Schmidt is Assistant Professor of Geography at Durham University and the author of Water: Abundance, Scarcity, and Security in the Age of Humanity (NYU Press, 2017).