I have always been enamored by U.S. illustrations of black struggles for freedom. Typical depictions feature African descendants insisting on respect and white state officials denying privileges. Cross-generational portrayals mediate these conflicts by construing blackness as spectacularly distinct within U.S. race relations. Although the specific “rights” in question change over time, these characteristics appear in images from the nineteenth to the twenty-first century. They are the stakes that underpin racist caricatures, early photography, and black screen cultures; in many ways, these themes define the pictorial history of the United States.

The year 2015 marks several watershed moments in the long arc of strivings for black freedom, including the 50th anniversary of the Voting Rights Act, signed by President Lyndon Johnson in 1965, as well as the 150th anniversary of the 13th amendment, ratified in 1865 to abolish the legal practice of slavery. On this continuum, 2015 will contribute its own pictures to the timeline of race in America, with illustrations of the first black president presiding over many important commemorations.

Last Saturday, March 7th, President Barack Obama gave a speech to memorialize the marches from Selma to Montgomery, Alabama. While his words were politically salient—charging congress to restore the Voting Rights Act—it is in pictures that the first black president marked an important contribution to the history of black people in the United States. Joined hand-in-hand with survivors of the civil rights struggle, the First Family stood on the frontline of a procession to cross the Edmund Pettus Bridge—the site of Bloody Sunday. Captured on the verge of marching, the Obamas were camera ready, smiling, their sense of motion stilled for the photographic opportunity. Hand-in-hand with Senator John Lewis and foot soldier Amelia Boynton Robinson, the Obamas were at the forefront, with Martin Luther King III and Rev. Al Sharpton among those notable figures that receded into back rows of the image. 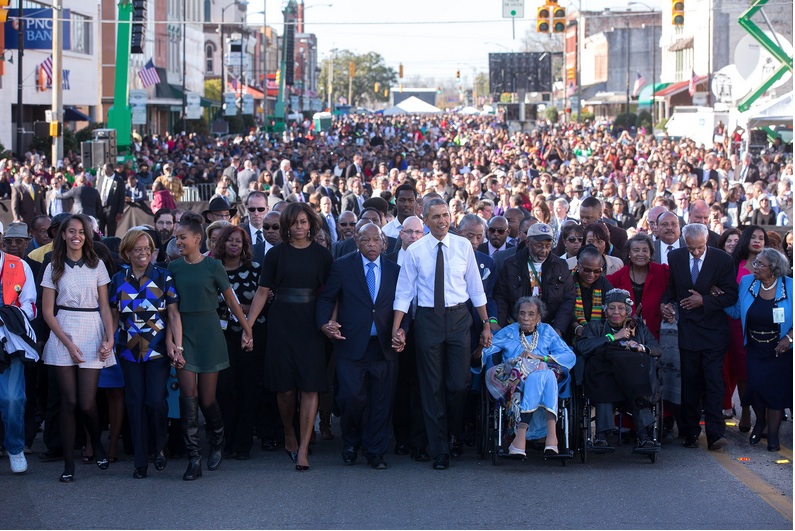 Staged to reminisce on the marches to Montgomery, this illustration suggests the fulfillment of black citizenship by the existence of a black president. It honors the murder and violation of activists in 1965, but draws on the sober and respectable depictions of triumph taken from days like March 25th when Martin Luther King Jr., Coretta Scott King and other activists safely arrived in the state capital. In living color, Obama implies the completion of black freedom struggles. Read against the precursor images—black-and-white photos of sixties activists marching forward, lips parted in song, tired, but convicted—the affirmation of black citizenship pictured in 2015 connects to illustrations that exclude contention. 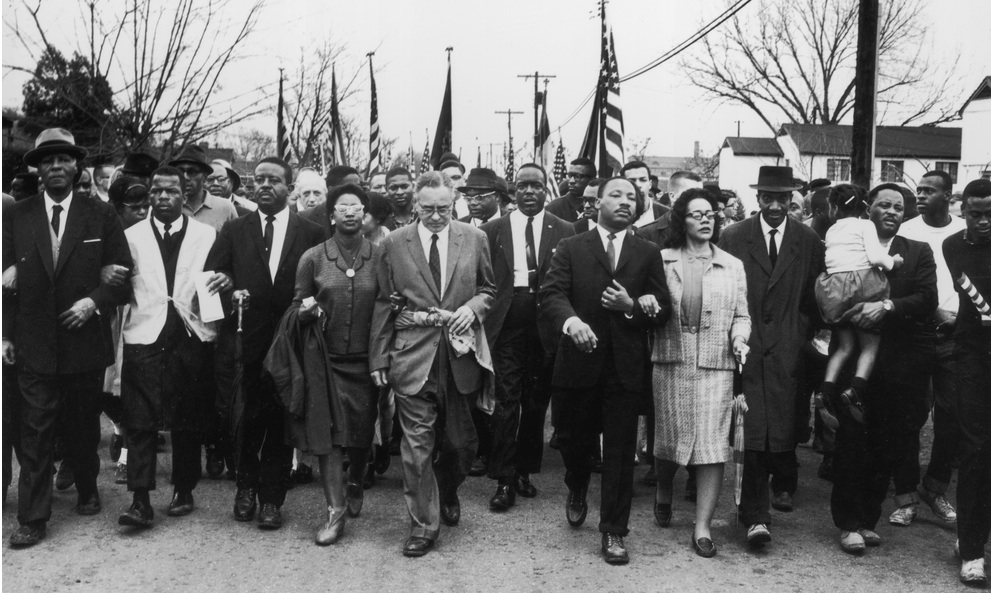 But like every attempt to picture freedom, threats against black life persist at the margins. While President Obama described the abuses of billy clubs and tear gas during the 1960s, he denied a connection to Ferguson, Missouri, where many of these tactics endure. While we were all invited to picture freedom through illustrations like Selma 2015, we were to look away from the mediation of murder, this time of Wisconsin teen, Tony Robinson.

I cannot deny the beauty of seeing a black president address civil rights activists at the site of transgression. I especially enjoy seeing the First Lady, her mother and growing daughters. But seeing the Obama family is different from viewing their existence as a representation of black freedom. National commemorations of the black freedom struggle, which ask us to hail the Commander-in-Chief as the fulfillment of our strivings, refuse the ways in which that struggle remains ever present. The tension between these motives animates every illustration of this kind.

The most popular depictions of free black people serve to bolster national narratives of U.S. race relations. In my book, Picture Freedom, I explore how people of African descent envisioned black autonomy in the context of slavery and among popular representations that were hostile to the idea of free black people. I consider complicated images that reveal the power and permanence of nineteenth century approaches to blackness. After them, I still enjoy pictures of black freedom, but now I wonder what they obscure.

Jasmine Nichole Cobb is an Assistant Professor of Communication Studies at Northwestern University and an American Fellow of the AAUW. She is the author of Picture Freedom: Remaking Black Visuality in the Early Nineteenth Century (NYU Press, 2015).

One thought on “Picture us free”