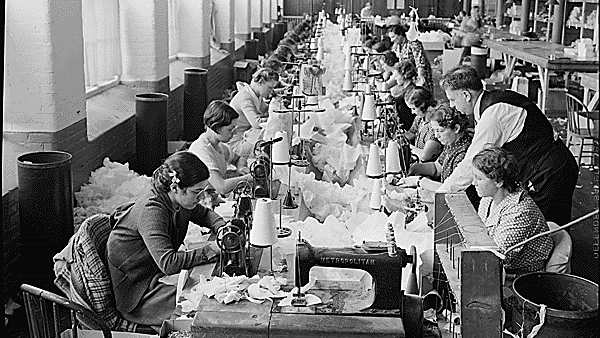 In this excerpt from Chapter 4 of the revised edition of Pregnancy and Power, Rickie Solinger explores the development of birth control after World War II and its effects on gender roles.

There is plenty of evidence that by the early 1940s, woman all over the country—many of them holding down jobs—were eager for birth control. A Gallup poll at this time reported that 77 percent of Americans approved of public health clinics distributing contraceptive materials. When the wartime rubber shortage caused difficulties for people trying to buy condoms, a nurse in a Southern clinic, invoking a wartime sin, told a visitor, “I wouldn’t be surprised if our patients aren’t hoarding them.”(Originally, endnote #5) Medical schools began preparing future doctors for a world in which the vast majority of married couples wanted to separate sex and pregnancy, and for a world in which wives could not afford to lose their earning power to an unplanned baby. A 1944 study showed that almost three-quarters of doctors trained in the late 1930s and later had received instruction in birth control, compared with only 10 percent of those trained before 1920.(Originally, endnote #6)

In 1942 the Birth Control Federation of America, the organization founded by Margaret Sanger and by then sponsoring more than two hundred clinics around the country, changed its name to the Planned Parenthood Federation of America. (Resonating with the theme of this chapter, the 1942 name change signaled a shifted from a focus on the connection between the sex act and a potential child to a focus on responsible—planned—adult behavior.) During the war, Planned Parenthood, newly empowered by mainstream acceptance of birth control, distributed pamphlets that associated the use of contraception with patriotism, national strength, and military victory. Above all, Planned Parenthood identified birth control as a crucial element in a centrally planned, successful, postwar America. One pamphlet, “Planning for Victory,” read in part, “The American people today need no further evidence on the necessity for quality in man power and materials to win the war. It seems, at last, that victory cannot be won without planning Planned Parenthood, with your understanding and support, can, in 1943, be made to mean that more healthy children will be born to maintain the kind of peace for which we fight.”(Originally, endnote #7)

Other central planners believed that birth control would have a different impact on the war effort. The Connecticut labor commissioner called contraception “a direct assault on our strength as a nation.” He exhorted Americans to “propagate the family” and decreed, “There should be no rationing of babies.” Those who used birth control, the commissioner argued, were indulging in pleasure, not thinking of their country. (Originally, endnote #8) But both those in favor of contraception and those against it thought about birth control as an important feature of postwar family life. And both sides suggested that “rubbers” and diaphragms would have an impact on the war’s outcome and on the character of postwar America. Contraception had arrived as a force to be reckoned with.

The combination of birth control’s popularity and the huge number of mothers in the paid workforce in the 1940s and 1950s challenged traditional sources of male supremacy: many women gained personal dignity from limiting their fertility and earning money. Many gained social status. At the same time, these developments encouraged some men to feel less responsible for supporting their families and less responsible for their sexual behavior. In this era, when many women wanted “to be something besides reproducers,” old traditionalist social commentators—and ordi- nary people—worried about the consequences of change. They looked at wage-earning, contraception-using mothers and worried about a gender- poisoned nation—a country in which “woman” and “man” had lost their distinctive meanings—a county on the verge of ruin.(Originally, endnote #9)

Speaking to many Americans confused about the meaning of these developments, the best-selling book Modern Woman: The Lost Sex (1947) unambiguously resolved the dilemma: the woman who combines work and motherhood “must of necessity be deeply in conflict . . . her work develops aggressiveness, which is essentially a denial of her femininity.” (Originally, endnote #10) The authors, one of whom was a female physician-psychiatrist, wrote that when women worked for pay, they became masculine. A woman who split her life in two—mother and worker—was in a “dangerous position of having to live one part of her life on the masculine level, another on the feminine.” The result: modern women are on “the path leading to discontent and frustration and resultant hostility and destructiveness.” (Originally, endnote #11)

In Modern Woman, the evil twin of a working mother is a woman who limits her fertility. “A child,” wrote authors Marynia Farnham and Ferdinand Lundberg, invoking a very traditional mandate just as the mandate was fraying, “is the woman’s power in the world.” Women who spurn procreation are “almost invariably” victims of “emotional disorder.” They make themselves strangers to pleasure. In the presence of a nonreproducing woman, Farnham and Lundberg descriptively suggested, pleasure “limps, sags, fails, disappears, or converts itself into active displeasure.” Farnham and Lundberg wrote that a woman using contraception is breaking “a deep primordial rhythm.” (Originally, endnote #12)

At a historical moment when more American women than ever before were working for wages and using contraception, Modern Woman and other like-minded jeremiads were efforts to recapture rigid sex and gender roles, to turn back the clock, to stop change. Being a woman after World War II often meant being in reproductive conflict: knowledgeable about contraception, in a position to get it, and determined to use it, on the one hand. On the other hand, for good reason, many women still felt the heavy hand of the cultural mandate that pressed them to reproduce, to be mothers, again and again. The mandate insisted that reproduction was white women’s most valuable gift to the family, the community, and the nation. 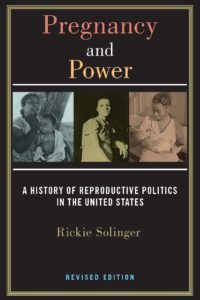 Rickie Solinger is a historian, the editor of a book series on reproductive justice, and a curator who organizes exhibitions associated with the themes of her books. Her books include Wake Up Little Susie: Single Pregnancy and Race Before Roe v. Wade, The Abortionist: A Woman Against the Law, and Beggars and Choosers: How the Politics of Choice Shapes Adoption, Abortion, and Welfare in the United States. The revised edition of her book Pregnancy and Power: A Short History of Reproductive Politics in America is now available.

ENDNOTES (original numbers to the text of the revised edition)

5. Johanna Schoen, “Fighting for Child Health: Race, Birth Control, and the State in the Jim Crow South,” Social Politics 4 (1997): 90–113. Schoen found this story of a determined woman, probably typical of many: a woman in North Carolina “told her husband that she would simply catch a hen and take it to the store and sell it in order to get money to buy some Trojans.” A public health official observed, “It is true that a lot of our mothers are not financially able to pay fifty cents for three Trojans. Yet, it is encouraging to see that some will be willing to sacrifice their chickens and eggs in order to stop babies from
coming.”