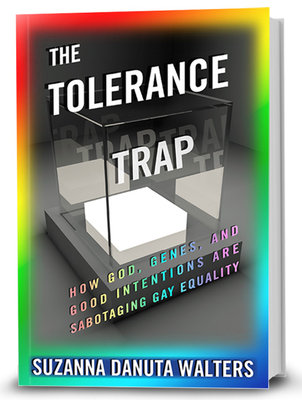 The parades are over… the fight for equality is not.

As LGBT Pride Month comes to a close today, we invite you to read this Q&A with Suzanna Danuta Walters, author of The Tolerance Trap—in which she discusses the shift from gay pride to tolerance, the trouble with same-sex marriage victories, and what it might look like on the other side of the rainbow.

Who doesn’t like tolerance? As you write, “It seems to herald openness to difference and a generally broad-minded disposition.” Looking a bit more deeply, what does “tolerance” really imply?

Suzanna Danuta Walters: Well, tolerance is certainly better than outright hatred for sure!  But think about it: we tolerate things we would rather do without (an irritating neighbor, a boring movie, a meeting that never seems to end) – we rarely speak of tolerating the things we enjoy (a delicious meal, a vibrant party, a sunny day.)  So tolerance is a very low bar to set when we are pondering the real and robust inclusion of a minority group into full citizenship.

Out gay and lesbian celebrities, the growing acceptance of same-sex marriage, the end of sanctioned discrimination in the military… Are these not good things?

Of course these are good things – I would be the last person to deny the very real changes that have occurred in the past 15 or so years.  Things are undoubtedly better.  But three points need to be made here:  they are not better enough (we still have disproportionate numbers of gay youth on the streets, we still don’t have ENDA passed, we still have only a handful of openly gay politicians and national leaders).  Second, those gains—out celebrities, gay marriage, and military inclusion—are not the “end” of the struggle for full inclusion. Gay marriage does not = gay rights. And, third, the framing of gay rights around “tolerance” and acceptance forestalls addressing the deeper and more challenging questions posed by full inclusion.

Social movements usually evolve through various stages over the course of years or decades. What stages has the gay and lesbian movement gone through, and where are we now?  What would success look like to you?

True, some of what we are seeing now is the inevitable “normalizing” and mainstreaming of a social movement. But I do think there are some peculiar twists that the gay movement and gay rights has taken. I think “tolerance” as both a means and an end is NOT, in fact, what most social movements have centered their work around.  So feminism didn’t demand “tolerance” for women, but full inclusion and rights and— more importantly—a sea change in cultural attitudes about gender. The civil rights movement asks not for “acceptance” but for a robust re-imaging of race and an historical reckoning with slavery and Jim Crow. We’ve had a wonderful and radical history of gay rights and gay activism—and that has by no means disappeared—but I think we are now threatening that progressive potential by buying into the tolerance trap.

What did “gay pride” used to mean? What does it mean now?

Oh gosh, I still feel a little tingle at the parades, but it does seem it has become more of a rainbow food court than a righteous rally. I do think “pride” is actually a very different affect than “tolerance” or “acceptance.” If we actually got back to that old way of thinking of pride (evidenced in slogans such as “gay is good” and “glad to be gay”) we might begin to shift away from the tepid language of tolerance.

Can you talk a little about how coming out has come to be seen as the master narrative of a gay person’s life? In what ways does the mainstream, at least as represented by conventional wisdom and popular culture, get it wrong?

Coming out has long been both our master narrative but also the way in which gay identities and lives are seen and even “measured” by straight “audiences.” But coming out stories are complicated. For example, in much of popular culture, coming out tales focus more on the reaction of the heterosexuals than on the actual feelings and lives of gay people doing the telling. It often serves to give straight folks a pat on the back for tolerating their gay brethren but often asks little of them in terms of real shifts in attitudes.

In whose interest is it that gay people become “just like everyone else”? What does the gay and lesbian community stand to lose if this assimilation becomes complete?

I actually don’t think it is in anybody’s interest. Assimilation surely might help some (wealthy, white, married) gay people find a home in this country, and it might give comfort to some anxious heterosexuals who don’t want to be bigoted but also don’t want to themselves have to change. But we all—as a nation—lose out when the rich difference of gay life and history and culture are stripped away in the march toward tolerance.

As a progressive (and a lesbian), you are obviously not against marriage equality. And you admit to certain sentimentality about the very fact that gay men and lesbians can now marry their partners in many parts of the U.S.  Yet… you suggest that gay marriage is “the perfect Trojan horse for the tolerance trap.” [p. 177] Tell us more.

Of course I am for marriage equality in the sense of opposing any restrictions on basic civil rights. But what I mean buy “Trojan horse” is that I think gaining marriage rights produces the appearance of full inclusion and equality—it sneaks it through the gages so to speak, and thus allows everyone to pat themselves on the back for their tolerant acceptance of gayness.

Some people may not realize that there has been a healthy debate within the gay and lesbian community for decades about the wisdom of fighting for marriage rights.  Give us the argument against marriage.  What would a more progressive family rights agenda look like?

Same-sex marriage has been won largely by making one totally kosher claim and two (well, many more actually…) hugely problematic ones. The legit claim is the simple one of equal treatment under the law. A no-brainer. Easy to support. But the other two…not so much. The first, used in amicus briefs throughout the country, is that gays should get their marriage because they are “born that way” and therefore their immutable homo-ness puts them in the same category as other groups with supposedly immutable qualities. So “we can’t help ourselves” is the identity argument at the core of much of marriage argumentation and indeed pro-gay discourse more generally. The second claim is that legalizing same-sex marriage won’t affect straight marriages at all (because we’re just like you). To which I have to say: if it doesn’t change gender normative, often abusive, deeply unequal, heterosexual marriages, then why does it matter at all? If queer marriages DON’T alter straight sensibilities around gender and intimacy and family then they are strangely not queer at all. And not worth all the fuss.

I’ve been so frustrated at the centrality of marriage to the gay rights movement. We are told that this is the culmination of the long march of progress and soon we’ll live in a happy rainbow world of official homolove. Lawyers and plaintiffs alike claim this decision makes us “more equal” and our families “more legitimate.” Gee, I thought we were pretty legitimate without marriage, and that our children weren’t torn apart by the agony of unmarried mothers. My nineteen-year-old feminist daughter (of a single mother to boot!) widened her eyes in horror at that old anti-feminist canard being trotted out and declaimed with nary a whiff of irony.

Love is not more legitimate or good or valuable if the state makes it official, and garnering a basic victory is not the same as making the world a more genuinely amenable place for sexual difference. Marriage rights are not synonymous with full citizenship or true belonging.

Also, many of us fear a few other things:  that we will now see a division between the “good” marrying gays who deserve tolerance and those recalcitrant gays who are pushed even further outside of the field of respectability.  So as I listen to the victory speeches I have a smile on my face, but I also hear the voices of my friends who have pledged not to take part in this rush to the altar. I hear the voices of the poor, the disenfranchised, the gays of color for whom marriage is hardly the golden egg or prized victory. I am sickened by the wedding industry that bilks billions out of those who need these resources for health care and housing and everyday life. I shudder at the resources that go into this industry, while HIV/AIDS remains a national crisis. I am reminded, again, of the vexed history of this institution and its stubbornly gendered and racialized parameters.

What is on the other side of the rainbow?  Give us a picture of how things have changed, not just for gay and lesbian Americans but for all of us, when gay and lesbian people truly belong?

We can’t know in advance what that will look like but I can say that gay belonging will mean assuming that heterosexual business as usual gets upended.  If you really reject the tolerance trap—and all that goes with it in terms of “born that way” ideas and odes to acceptance and assimilation—you open the door to a re-imagining of intimacy, family, sex, and love as unmoored from gender certitudes and assumptions. It might be pretty fun.

One thought on “Pride Q&A with Suzanna Danuta Walters”