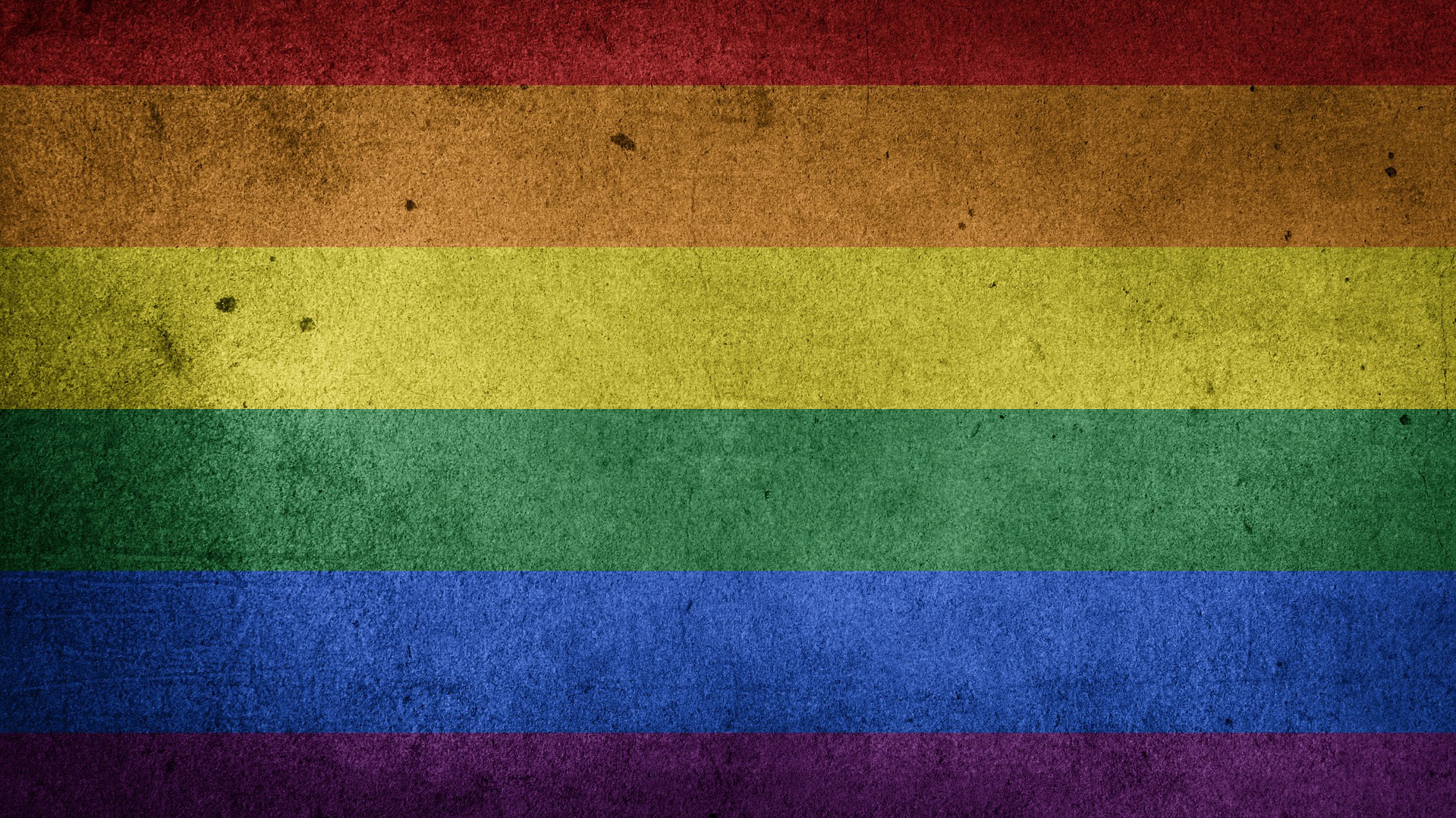 In June, rainbow flags dot the landscape of gay America like happy poppies seeking sunlight. Once relegated to dark corners of gay urban enclaves, the flag has now come to adorn bumper stickers, window dressings, t-shirts, and even government buildings. Given this proliferation, it is all too easy to imagine tourists wandering the storefronts of San Francisco’s Castro district and buying rainbow imprinted mugs or key fobs as souvenirs to share with their friends back home, wherever that home might be. Some read the wide-spread acceptance of the flag, the quintessential symbol of gay pride, as a testament to the rising acceptance of gay men and women in mainstream America. Like gayness itself, the flag has come to have a place not only in strictly defined gay spaces, but has found a level of prominence in the public arena. As the protest chant goes, “We’re Queer, We’re Here,” and now “here” is everywhere.

Contemporary gay leaders like to promote the rainbow flag as being representative of the diversity that is allegedly found in the gay community. For example, in an article titled, “The Rainbow Flag,” by Steven W. Anderson which appeared in GAZE Magazine in 1993, the author wrote that “the most colorful of our symbols is the Rainbow Flag, and its rainbow of colors – red, orange, yellow, green, blue, and purple – represents the diversity of our community.” This line, now repeated in a number of websites and pamphlets, has come to be taken as gospel among gay rights leaders who want to paint gay history and the gay community with a politically correct brush of inclusion. Yet, the origins of the flag betray a much less racially inclusive history.

Rather than a symbol of diversity, the flag is widely reputed to have been inspired by the Judy Garland song, “Somewhere over the rainbow,” an homage to Kansas, one of the whitest places in America. Rather than an ode to diversity, the song represents Dorothy’s deeply held desire to return “home,” far away from OZ, which she finds not-so-wonderful after all, given all of the multiformity of characters she encounters there who are starkly different from those found in her white bread world. Rather than embrace the diversity that she finds in Oz, Dorothy desperately seeks to escape it. While she meets diverse traveling fellows along the way, none of them are any more than accoutrements to her ultimate goal of returning home.

In fact, none of the meaning assigned to the original colors of the flag by creator Gilbert Baker remotely suggested racial diversity in any form. In Baker’s imagining, the original eight colors stood for sex (pink), life (red), healing (orange), sun (yellow), nature (green), art (turquoise), harmony (indigo), and spirit (violet). Revisionist history aside, the fact that the flag was never meant to be a symbol of racial diversity would not be surprising to many gay men and women of color, particularly given the history of the gay rights movement that is publicly promoted or the social organization of contemporary gay life. As Allen Bérubé has noted in his highly influential essay, “How gay stays white and what kind of white it stays,” contemporary gay life, in all of its forms, is extremely white.

So it’s not surprising that a recent change to the rainbow flag in the city of Philadelphia has created a “controversy” that has now been covered in the national media. Originally intended to address a number of racist incidents in Philadelphia’s “gay community” over the past year, the addition of a black and brown stripe meant to “recognize people of color in the LGBTQ+ community,” and “make big strides toward a truly inclusive community,” according to the website “More Color, More Pride,” the announcement of the flag was met with immediate backlash, largely from gay white commentators denouncing the change. The patterns of the most common critiques, such as “the flag stands for all gay people,” “the flag shouldn’t represent any specific race,” or that people of color are given “special treatment,” are all too familiar to those who have worked on issues of racial justice and inclusion for any period of time. While clearly, much less is at stake, the clarion call for an “all inclusive” flag that doesn’t single out any specific race, is the gay white version of “all lives matter,” empty and hollow when queers of color have been constantly and consistently excluded, often from those gay groups and organizations proudly displaying the flag outside their doors. In fact, in study after study, gay people of color, particularly gay men of color, report more racism within the gay community than outside of it.

Rather than inclusion, the social organization of contemporary gay life is largely based on racial exclusion. Rather than a multiplicity of colors, whiteness dominates contemporary gay life. Where racial integration takes place, it takes place only at venues where men of different races come together specifically for the purpose of seeking sexual partners of a given race while mainstream gay organizations, visibly gay spaces, and its political aspirations remain largely white. In the contemporary gay imagination, race is not something to be incorporated but to be set apart as a sexual fetish. And given the centrality of whiteness for contemporary gay life, and the muted forms of white supremacy practiced by some gay white men, it isn’t surprising that the Alt+Right has managed to recruit gay white men in surprising numbers.

All of this leads to the question of what the backlash is really about, particularly given the legion of pride flag variants that already exist, including one that features Babadook, a fictional movie villain that somehow managed to become a gay icon. The backlash isn’t really about

changing a symbol, that’s been done numerous times without a whisper of opposition. It’s about the gay community’s investment in whiteness being disrupted. As whiteness has become the currency by which the gay movement attempts to win mainstream approval, whiteness, and the desire for whiteness, has come to be the central organizing principal of gay life, leaving gay people of color at the margins. It’s about white people being forced to recognize that their symbol, and their actions, marginalizes others. It’s about asking white people to be uncomfortable with race, and they clearly are. If anything, the backlash to adding two colors to the flag clearly demonstrates the need to have done so. Perhaps that’s the point.

C. Winter Han isAssociate Professor of Sociology at Middlebury College and the author of Geisha of a Different Kind: Race and Sexuality in Gaysian America (NYU Press, 2015).

2 thoughts on “On adding more colors to the rainbow”