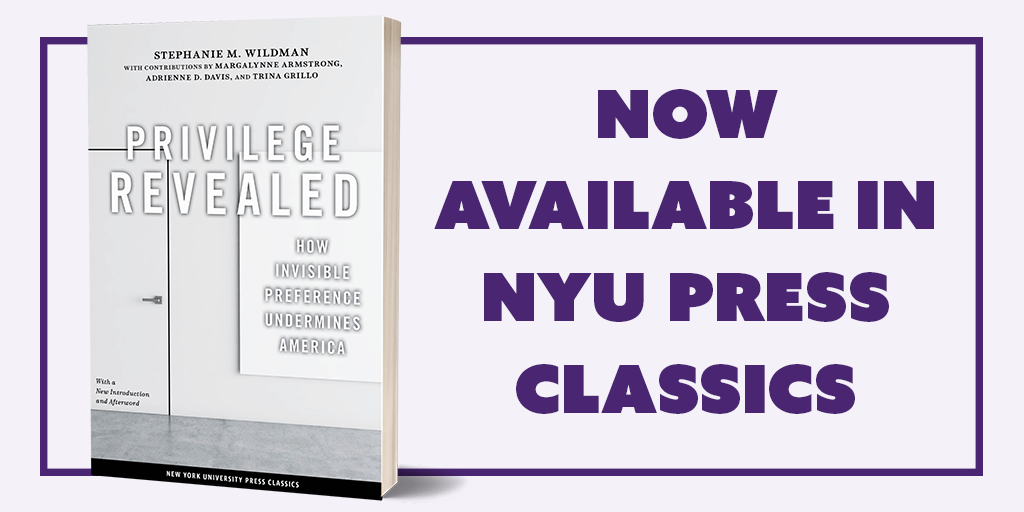 First published 25 years ago, Privilege Revealed offers an in-depth examination of the different forms of privilege perpetuating inequality within American society. With the book now available as an NYU Press Classic, we spoke to authors Stephanie Wildman and Margalynne Armstrong about the updates to this new edition, the collaboration that brought the book together, and how the conversation around privilege has changed since its first publication.

What is new to the book in the 2021 updated edition?

SW/MA: We are honored that NYU Press chose to reissue Privilege Revealed as part of their “classics” series, though it is a little daunting to be old enough to have one’s work regarded as classic. More somberly, the issues the book addresses remain relevant today although we wish they did not. As the preface explains, “politicians attack diversity training and critical race theory with the goal of suppressing discussions of privilege and racism in order to maintain the status quo.” Nonetheless, significantly more people in the U.S. recognize the white supremacy that undergirds that status quo, and have come to understand the harms of microaggressions, which collectively are not very micro. The new “Moving Forward: From Colorblindness to Color Insight” offers some vocabulary and methodology for more meaningful conversations about the imbedded systems that undermine the democratic ideal.

How has the discussion on race and privilege changed in America since the original release of Privilege Revealed 25 years ago?

SW/MA: The dialog about privilege in this book inspired examination of privilege in other contexts beyond the major identity categories, bringing a particularity to the examination of privilege as “the unseen partner of domination and subordination,” as Lisa Ikemoto describes. [BioPrivilege, 42 Wash U. J. L. & Pol’y 61 (2013)]. Professor Ikemoto’s article appears in a 2013 Washington University Journal of Law & Policy symposium issue: Privilege Revealed: Past, Present, & Future. There, scholars discussed the relevance of a privilege analysis to responsibility, property, biomedicine, race/ethnic specific law student organizations, contract law, and autonomy.

Who is the intended audience in Privilege Revealed? Has that answer changed since the book was originally released?

SW/MA: Our goal was to reach a broad audience – particularly white people who might be unaware of racial privilege, but also people of color, to support them in arguments they might make to explain their reality.

The intended audience hasn’t changed. The book is for anyone who is interested in participating in current dialogues about privilege, race (including whiteness), and the many other identity categories. Stephanie has had white readers tell her that this book altered the way they saw the world.

This book’s authorship says “Stephanie Wildman with contributions by Margalynne Armstrong, Adrienne Davis, and Trina Grillo.” Can you tell us about that collaboration?

SW/MA:  Initially, Trina, Adrienne, and Stephanie met regularly to talk about discrimination law and its failures to address societal disadvantaging. We three published some of this work in essay form. Richard Delgado and Jean Stefancic, the series editors for Critical America approached Stephanie about writing a book proposal expanding on this work and on privilege as the unexamined obstacle in legal analysis. They suggested that Margalynne Armstrong’s work on housing would be essential to the volume. Additionally, Margalynne worked on the book’s conclusion. Stephanie and Margalynne later became colleagues at Santa Clara Law and began writing together regularly about whiteness and the legal academy. Some of that work informs the new material in the re-release of this book.

Privilege Revealed resulted from a multi-racial collaboration. Writing across racial lines can create a trust that enables a deeper examination of these issues.

SW/MA:  Rather than suppressing an awareness of race, as an aspiration to colorblindness does, color insight encourages further exploration of the impact of race in society. Color insight recognizes that most of us do see race and underlines the need to understand what that racial awareness might mean. Color insight does not assume that people or groups have any specific traits or propensities.

Why is privilege so hard to see, even for those with good will? How does this book go about exposing privilege?

SW: I had to laugh when I saw this question since NYU Press had originally wanted to use the title “Privilege Exposed,” which I thought was too pornographic sounding. But seriously, by providing a vocabulary about systemic privilege, the book gives people a tool to examine the many ways they are each privileged and not privileged regarding identity categories.

DE&I or Diversity, Equity, and Inclusion are corporate buzz words at the moment, and one chapter describes how the “dream of diversity” has yet to be fulfilled. What drives this “cycle of exclusion” that you describe?

SW/MA: Diversity was a buzz word twenty-five years ago, so the recognition of equity and inclusion now is a step forward. Diversity populated workplaces with a smattering of folks outside the typical white mainstream, but kept them as window dressing on recruitment catalogs without actually listening to the valuable contributions that they could make. The addition of equity and inclusion and equity moves structural actors beyond listening – beyond voices and faces. Equity in outcome is too often missing from civil rights discourse.

As law professors yourselves, you speak extensively to privilege as it exists in the law school setting. How have legal education institutions changed in their attitude towards addressing privilege and the idea of “legal liberalism” in the 25 years between editions of Privilege Revealed?

SW/MA: Not enough would be the short answer. But the development of critical race theory as a discipline beyond the legal academy has meant that many students come to law school with a familiarity concerning privilege and whiteness. These students are interested in pursuing substantive justice studies.

What are a couple of action items you would suggest for Privileged Revealed readers who experience privilege and want to take active steps to challenge the hierarchical status quo?

SW/MA:  If you hear a remark that is racist, sexist, homophobic and you are in the privileged thread of that identify, speak up – don’t wait for the person without privilege to do the work. Educate your compatriot in privilege about why the remark is not appropriate. Look around your workplace, your meeting place, your social group and ask yourself who isn’t there? Why aren’t they there? Can you act affirmatively to change that? Noticing is a first step; outreach is a second. Keep working towards action that includes those previously excluded. 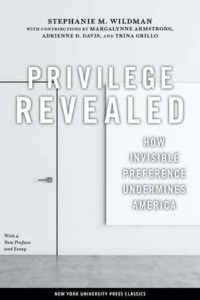 Stephanie M. Wildman is Professor Emerita at Santa Clara Law and a member of The Writers Grotto. Margalynne Armstrong is Associate Professor of Law at Santa Clara University. Their book Privilege Revealed: How Invisible Preference Undermines America is available as an NYU Press Classic.