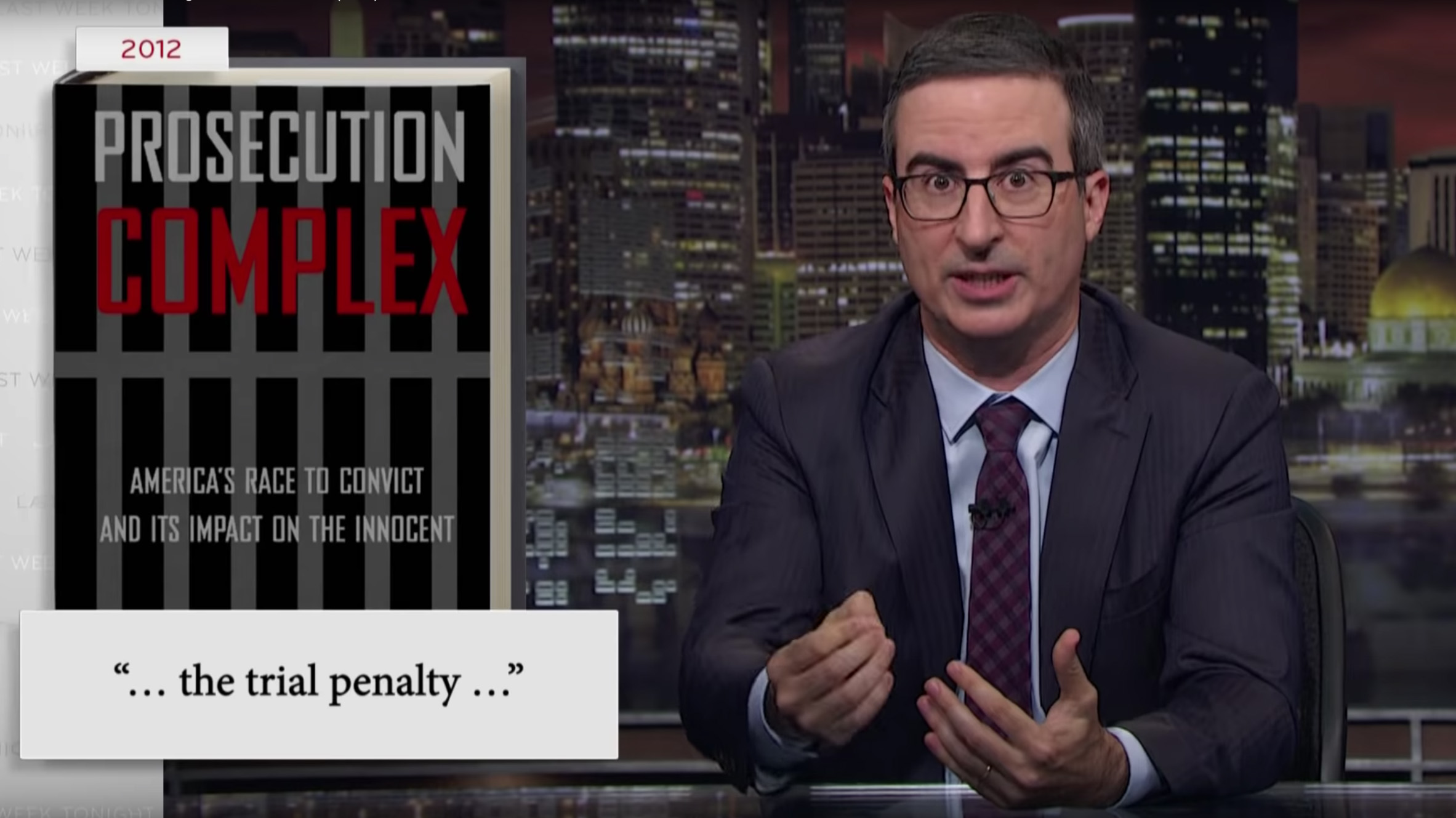 Get the e-book of Prosecution Complex on Amazon now for only $1.99.

Earlier this month, HBO’s Last Week Tonight with John Oliver did a segment on the work of American prosecutors.  Witty and informative as usual, Oliver addressed many key issues related to prosecutors, including their nearly unbridled power to charge people with crimes, choose whether to disclose evidence, and offer plea bargains.  Much to my delight, the piece contained a screenshot of my New York University Press book, Prosecution Complex: America’s Race to Convict and Its Impact on the Innocent (2012), prompting a flurry of emails from former students and tweets from current ones.  After basking in the fleeting glory of the moment, it dawned on me that this is a nice time to take stock—to reflect on whether some of the suggestions in the book have come to fruition in the half dozen years since its publication.

The book’s main thesis is that most American prosecutors are well-intentioned lawyers who all too often make poor decisions due to a combination of (a) psychological, professional, and political factors and (b) an absence of robust ethical and legal rules that limit their discretion to make these decisions.  Among other things, I expressed a hope that the public pay more attention to elections for county district attorneys and that prosecutors’ offices establish in-house “conviction integrity units” to re-examine possible wrongful convictions in their jurisdictions.  Both of those wishes have come to pass.  Fueled partially by the outrage generated by police shootings of unarmed African-American civilians, progressive candidates have entered DA races in droves.  Voters have elected a number of them, most notably Kim Foxx in Chicago in 2016 and Larry Krasner in Philadelphia the following year. This represents a sea change from years gone by when incumbents typically ran unopposed and success on the ballot stemmed more from name recognition and party affiliation than criminal justice policy.

What’s more, we have witnessed the stunning rise of prosecutorial Conviction Integrity Units (CIUs).  According to the National Registry of Exonerations, 33 CIUs were sprinkled across the country in 2017, more than twice as many as in 2013.  Of the 269 exonerations that CIUs helped to secure from 2003 to 2017, more than 80% have taken place since 2014. [link]

Despite these positive developments, much of the news about prosecutors remains sobering to those of us who are skeptical of their power and worried about its abuse.  Take the issue of prosecutorial accountability for misconduct.  In my book, I decried the reluctance of state disciplinary boards to sanction prosecutors for their misdeeds, and there is little indication that things have improved.  For instance, Nina Morrison of the Innocence Project and I filed a complaint with the Massachusetts Board of Bar Overseers requesting an investigation into the behavior of two assistant prosecutors in the state Attorney General’s Office whose work in regard to handling a high-profile crime lab scandal was so egregious that a trial judge characterized it as constituting “a fraud upon the court.” Yet, even with such a judicial finding, the BBO has dragged its feet. It has not held a public hearing, let alone resolved the complaint, more than a year after its submission. [link]

I am thrilled that prosecutors have seemingly caught the eye of the public and the media in the current zeitgeist.   As it is often said, sunlight is a great disinfectant.  Continued exposure may very well lead to additional reforms designed to limit prosecutors’ power, enhance their decision-making, and perhaps encourage me to write a new book with a more optimistic vision of the nation’s most powerful attorneys.

Daniel S. Medwed is University Distinguished Professor of Law and Criminal Justice at Northeastern University School of Law. He is the author of Prosecution Complex: America’s Race to Convict and Its Impact on the Innocent (NYU Press, 2012).