Heather Laine Talley is Assistant Professor of Sociology at Western Carolina University. Her new book, Saving Face: Disfigurement and the Politics of Appearance, examines the cultural meaning of interventions aimed at repairing faces defined as disfigured. In the interview below, Talley discusses her research on appearance, disfigurement, and the role of the human face in society. More about her writing and work can be found at heatherlainetalley.com. 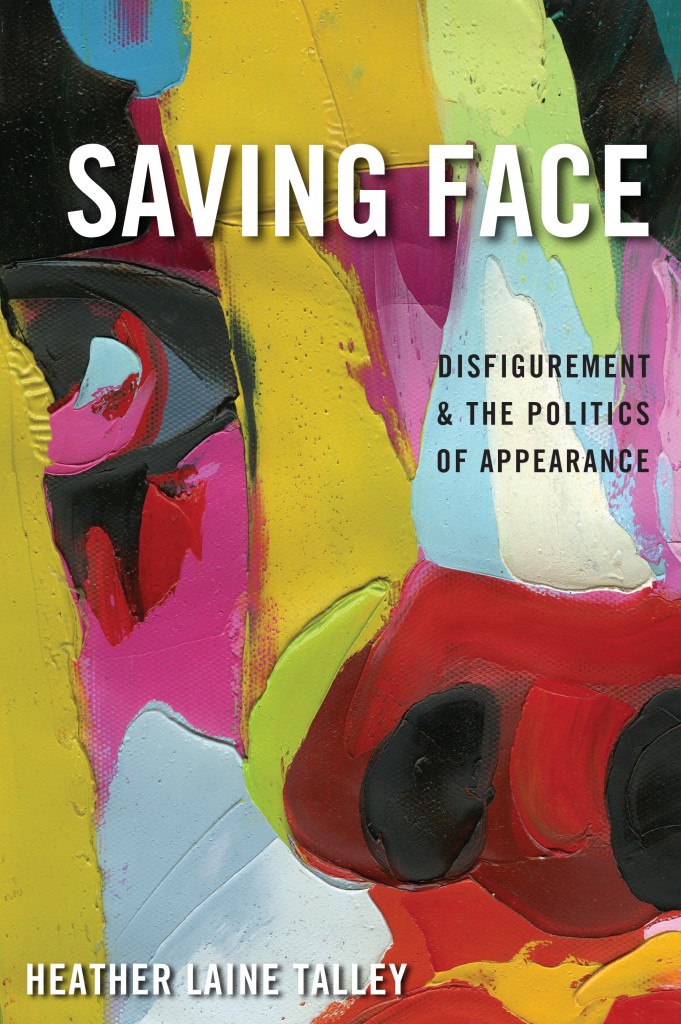 What sparked your interest in facial disfigurement and reconstructive surgery?

Heather Laine Talley: In 2004, I began a project that was focused on exploring the bioethics of face transplantation (FT), a technology in the making. No transplant had yet been completed, but the surgical and immunological groundwork for FT was largely established. Face transplantation ignited hugely divergent reactions from surgeons, bioethicists, cultural critics, and the public at large. Some saw FT as miraculous, while others perceived FT as a gruesome and unethical procedure. (It’s important to note that in the time since FT has actual been practiced, some critics have radically shifted their position.)

The ways that reconstructive surgery was framed in these debates as both life enhancing and lifesaving fascinated me. Clearly though, this is a different kind of lifesaving procedure than in the way a heart transplant is lifesaving. As I started researching surgery on the face more broadly, I heard surgeons talk about a wide range of surgeries in similar terms.

It’s not new to point out that we are enmeshed in beauty culture or that the consumption of cosmetic intervention is on the rise. But the ways appearance is increasingly thought about in terms of life and death is striking and worthy of investigation.

In many ways, my work is driven by a classic sociological question—how do statuses like race, gender, class, sexual identity, disability, and citizenship status impact our life chances? I thought there was more to say about appearance. Rather than unpacking beauty, I became fascinated by the other end of the appearance spectrum: specifically, the way appearance functions either as a vector of privilege or a basis of social death.

From rhinoplasty and face lifts to Botox injections, cosmetic facial procedures continue to grow in the U.S. Why do you think that is—does cosmetic surgery help raise self-esteem?

In a culture that overvalues appearance, it’s no wonder that our self worth is shaped by what we look like. It’s critical that we begin to think about how frequently appearance is used to attribute value over and above any other dimension of a person. In other words, appearance is often valued more than personality or experience. This is glaringly clear in schools and even workplaces. Psychological research shows that we attribute all sorts of positive qualities to beautiful people, so it isn’t surprising that cosmetic surgery is on the rise.

But what’s interesting is that there is also research that demonstrates that in cases of trauma, the severity of facial injury does not predict individual adjustment, self image, or quality of life. What this suggests is something that many of us know intuitively—we can change or improve elements of our appearance without experiencing a change in our overall happiness.

It’s not safe to assume that cosmetic surgery actually improves self-esteem, so I think we should question what the real and durable effects of cosmetic surgery are. It is true that our attractiveness does impact factors of our lives like salary that can shape our overall wellbeing, and so cosmetic surgery can generate powerful effects, especially in social interactions.

What can be done to reduce stigma associated with facial disfigurement?

The organization Changing Faces does amazing work to combat lookism or discrimination on the basis of facial appearance. Their Face Equality campaigns highlight the stereotypes associated with facial difference and the assumptions people make when encountering appearance disabilities. Some argue that our reaction to beauty, and by proxy ugliness, is an evolutionary (and thereby “natural”) response. Perhaps.

But what decades of social justice work tell us is that we are capable of transforming our implicit assumptions. Changing Faces offers incredible resources, including a Face Equality survey that provides users with some feedback about their appearance based biases and guides for teaching children about appearance disabilities.

While Saving Face offers a theoretical analysis of facial surgery, I am very invested in the practical implications of this work. For this reason, I include [in the book] a list of eleven concrete strategies that those invested in appearance justice might employ in order to challenge stigma in everyday life and the systematic dimensions of lookism, too.

What has your volunteer work at a burn camp for children and adolescents taught you?

Burn camp has taught me that things could be otherwise. Currently, stigma is intensified in the very spaces designed to treat a condition. For example, in the process of diagnosing a condition and outlining treatment options, stigmatizing language is regularly employed. This isn’t only true in the case of reconstructive facial surgery, but of many, many biomedical interventions, from gender affirming surgeries to labor to Cesarean birth. Oftentimes, stigma drives consumption, so there is a financial incentive at stake in healthcare for-profit contexts like the United States.

But facial surgeons may have something to learn from the kids I spent time with. What I saw over and over again was the capacity to acknowledge an injury, to hold space for grief or pain, and to avoid conflating being burned with being a victim. It’s not that some of the children I met haven’t been victimized. Some injuries are the direct result of violence. Others have been victimized by a health care system that provides disparate services by socio-economic status.

R.J. Palacio’s debut children’s novel, Wonder has sparked attention on school bullying associated with facial deformity. What advice can you give parents and educators in changing attitudes on facial disfigurement?

Wonder is truly exceptional, particularly because August the main character who is facially atypical speaks for himself. Representations of disability, and facial difference in particular, permeate popular culture, but an appearance disability often functions in the service of a plot. At the same time, stereotypes about atypical appearances abound. A scar is regularly used to signal that a character is evil. A congenital anomaly is used to mark learning difficulty. Wonder stands in sharp contrast to both of these patterns.

Kids often take their cues from adults about how to respond to new information. Children’s perceptions are incredibly malleable, which suggests that as adults, we must do some real self-reflection about our own reactions and biases, to consider the subtle (and overt) ways we play a role in dehumanizing others who are different from ourselves.

What do you hope readers will learn from Saving Face?

Saving Face presents some interesting case studies about contemporary aesthetic surgery and about the redefinition of some interventions as “lifesaving.” But more than anything, I’d like readers to think about the taken for granted ways differences—from appearance to family configuration—are informally talked about and how these everyday ways of thinking about difference translate into systematic devaluation.