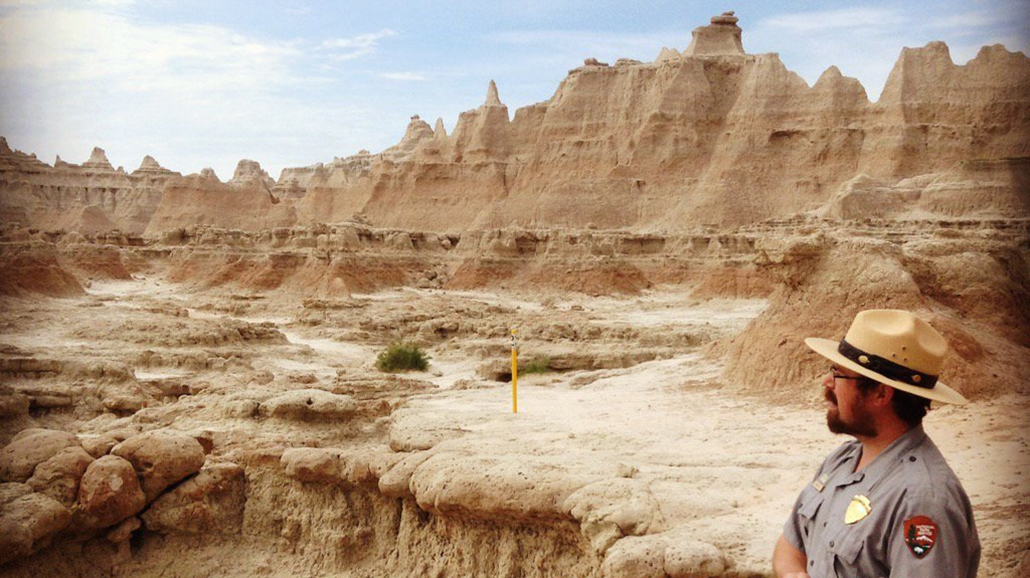 Much of what has happened in the first two weeks of the Trump Presidency came as a shock, but little of it could accurately be called a surprise. The ascension of the Badlands National Park Twitter Feed to national prominence, however, certainly qualifies as the latter. When the Trump administration ordered the National Park Service to suspend its twitter accounts, one of which had disparaged the size of his inauguration, the Badlands National Park account refused to stand down, tweeting facts on climate change in clear defiance of the order.

America’s national parks and the rangers that manage them have a reputation for standing above politics. This reputation is no accident of history—and it’s not entirely accurate either. But the image of the parks as representing America, all of America, the best of America—that image grounds the ideal of national parks from their inception. Parks represent America to America, act as a representation of society to itself and therefore fall under Emil Durkheim’s classic definition governing the sacred. In the idea that national parks are “America’s sacred places,” the circularity of social self-representation has immunized the parks from much of the divisiveness that characterizes American politics. To tear down the parks would be to tear down ourselves. So when, for instance, Utah Congressional Representative Jason Chaffetz introduced a bill to sell 3.3 million acres of public land, public outcry across the political spectrum, most notably from hunters and sportsmen, forced him to withdraw the bill and produce his certificate indicating that he is a real American:

And these weren’t even parks. In the hierarchy of public lands, the properties in question were on the bottom rung. If even these lands qualify for bi-partisan political protection, think of what such an assault on the national parks would provoke.

When the Badlands National Park Twitter Feed continued to tweet in defiance of President Trump’s order, and when it tweeted on a subject that the President had identified as a “Chinese hoax” (i.e., climate change, which is neither Chinese nor a hoax), the parks entered a political divide in a particularly powerful way. Being the caretakers of American sacred space, their defiance of the President takes on the quality of a revolt of the clergy. Such resistance holds more weight than the partisan political activities of traditional American religious institutions. Those fall in the domain of the private sphere as special interests. In contrast, as representatives of the public in charge of the symbols of that public, park rangers wield an authority closer to that of Buddhist monks in Southeast Asia. There, monastics stand as bearers and protectors of collective identity whose authority is seen as universal. In this light, the rangers’ entry into politics takes the color of heroism, a deus ex machina coming from somewhere beyond and outside of politics, or from the unity that contains its differences.

I come not to bury such authority with revelation of its partisan political history, but to praise it. National parks stand as one of the pinnacle achievements of liberal, progressive politics. Parks are public lands, which means that as property they belong not to one person at the expense of another, but to each person and in full within the limits of the authority that governs shared use. The magic of this political operation allowed the expropriation of private property (initially of indigenous peoples and later of settler colonists and their descendants), installation of federal control, erection of checkpoints, establishment of entry fees, and prohibition of numerous activities otherwise allowed on private property—all in the name of enriching and liberating everyone. This assertion of power in designating and claiming lands in the name of the public has led political partisans such as Jason Chaffetz to view such operations as liberal, progressive “land grabs;” a bunch of urban elites carving out vast reserves for occasional, spiritual leisure strolls at the expense of the local ranchers, farmers, loggers, and other locals with more legitimate (livelihood-based) claims on the land. But even with the ascendance to one-sided partisan political dominance that Trump’s election entailed, the bid to shift control of some of those lands and Trump’s bid to silence some of its caretakers faltered in the face of unprecedented opposition. Otherwise staunch conservatives made clear that they like this socialist cooperative of public lands. Park rangers established alternative, independent social media accounts to continue their resistance to climate denial unimpeded, and still in the name of the public, even if unofficially. The magic of the part(-isan) standing in for the whole has maintained much power and much reality. Understanding the

paradoxical logic of this operation remains as a key to appreciating political unity and the threats to it. Parks are an excellent place to contemplate the social particulars that inhabit a natural whole.

Kerry Mitchell is Director of the Comparative Religion and Culture Program at Global College, Long Island University. He is the author of Spirituality and the State: Managing Nature and Experience in America’s National Parks (NYU Press, 2016).