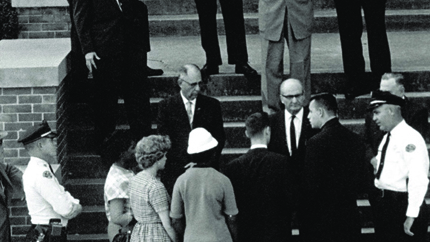 Americans, black and white, love to commemorate the civil rights struggle.  School programs, public events, popular culture, and historic markers all recount the heroic battle black Americans waged for their full humanity.  Yet, racial inequality continues to plague the United States, and most popular civil rights history mythologizes it in ways that hinder the full realization of the movement’s goals.  Many tellings of the Civil Rights Movement story omit how ferociously white individuals and institutions resisted the change that black activists demanded. Among these institutions, American religion served as one of the most important, if often unnoticed, sources of ideologies that thwarted the civil rights struggle.

Indeed, religion served as a key thread in the fabric of racial inequality. American faith institutions reflected the racially distinct worlds blacks and whites inhabited. Methodists and Presbyterians segregated their black communicants into racially defined administrative units so that no pastor would serve a congregation of the opposite race and spiritual fellowship never crossed racial boundaries.  Until 1950, black Presbyterians ate in the kitchen, rather than in the dining hall with their white counterparts, at annual denominational meetings. No black members belonged to the communion that by the 1960s claimed the allegiance of the largest numbers of American Protestants, making “Southern Baptist” a racial as well as a religious descriptor. Black Methodists and Presbyterians repeatedly demanded an end to these segregated arrangements, but made little headway in these white-dominated institutions.

Perhaps more significantly than denominational and congregational segregation, American evangelicals espoused an individualistic Gospel that focused almost exclusively on personal salvation, utterly stripping the Christian faith of any social implications.  Many depicted civil rights initiatives as utterly un-Christian endeavors, endorsed only by those who had forsaken the true Gospel of salvation.  Improved race relations would come, they maintained, “One heart at a time,” as individuals came to an experience of the new birth that purged their hearts of sin.  Never mind the fact that racial inequalities prevailed most savagely in precisely those places—like the heavily evangelical South—where nearly everyone claimed just such a conversion experience.  The salvation of every American would not have alleviated the inequities perpetuated by institutionalized inequality in employment, education, and political power.

By and large, America’s religious institutions and leaders failed to sit at the vanguard of racial change in America, though some thoughtful leaders within every communion urged their denominations and communicants to embrace racial change.  Many of the most vociferous voices arguing against racial transformations used the “one heart at a time” logic.  They insisted on a version of the Christian faith and of American identity that urged individual change while leaving intact the systems that served the interests of white supremacy. Tellingly, those white religious groups and individuals who did join black Americans in their struggle rarely came from the ranks of conservative evangelical religion; they came rather from a quite different theological orientation, one that believed systems could wreak evil just as much as individuals could.

Does it really matter if we understand the role that religion has played in our racial past?  Mere condemnation of traditions that remain profoundly meaningful to so many Americans misses the point entirely.  Yet grasping the issues in our racial present depends to some degree on understanding how these arrangements arose; thus we need a steely commitment to civil rights histories that enlighten rather than mythologize.  And here questions about how we justify—even sanctify—the structure of our society remain deeply relevant.  Religion, for all the many different ways it satisfies human cravings, plays important roles in our social ordering.  It helps us identify who belongs to our community and who remains outside it.  It helps us decide who deserves the fruits of our best collective efforts and who does not, who can claim our protection and who merits our wrath.  As religion continues to play an important role in our public conversations, 2016 is an important time to ask how faith has shaped the most significant struggles in our past.

Carolyn Dupont is an Associate Professor of History at Eastern Kentucky University.  She is the author of Mississippi Praying: Southern White Evangelicals and the Civil Rights Movement, 1945-1975, published by NYU Press in 2015, and now available on NYU Scholarship Online. Read the introduction to her book, freely available on UPSO for a limited time.