All of us at NYU Press are deeply saddened by the passing of James B. Jacobs, Chief Justice Warren E. Burger Professor of Constitutional Law and the Courts, and director of the Center for Research in Crime and Justice at NYU School of Law. A prolific writer, Jacobs was the author of 17 books, many of which we were proud to publish. He will be well-remembered for the important contributions he made to legal studies in the books below and all of his other works. 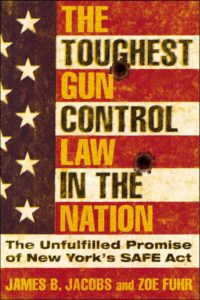 The Toughest Gun Control Law in the Nation

by James B. Jacobs and Zoe Fuhr

A comprehensive assessment of real gun reform legislation with recommendations for better design, implementation and enforcement

“This masterful, penetrating study of the nation’s strongest gun control statute does what legal sociology aspires, but often fails, to accomplish: demonstrate the gap—here, a chasm—between the law on the books and the law in action, between policymaking and policy implementation. Anyone concerned with reducing gun violence needs to absorb and act upon its wisdom.”—Peter H. Schuck, author of One Nation Divided: Clear Thinking about Five Hard Issues That Divide Us 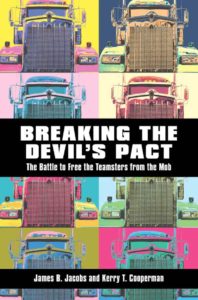 The Battle to Free the Teamsters from the Mob

by James B. Jacobs and Kerry T. Cooperman

An in-depth study of the U.S. v. IBT, beginning with Giuliani’s lawsuit and the politics surrounding it, and continuing with an incisive analysis of the controversial nature of the ongoing trusteeship

“Breaking the Devil’s Pact tells the compelling story of the government’s Herculean effort to break La Cosa Nostra’s stranglehold over a notorious union. It will shock and surprise you, proving once again that the truth really is stranger than fiction.”—Randy Mastro, Litigation Partner, Gibson Dunn & Crutcher LLP, and former federal prosecutor

“This book should be of interest to all those interested in racketeering law, organized crime, and the role of the government in addressing entrenched organized crime and corruption in private organizations.”—Criminal Law and Criminal Justice Book Review 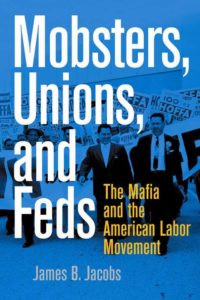 The Mafia and the American Labor Movement

by James B. Jacobs

“Jacobs offers a history of the federal government’s efforts to curb labor racketeering. The heart of his text focuses on the results achieved by employing Civil RICO suits to weed out organized crime from unions long mired in corruption. The Justice Department has mounted twenty such efforts since 1982, and Jacobs’s book is the first to provide a comprehensive assessment of this controversial tactic. He tackles this ambitious project with a combination of detailed research, clear writing, and judicious consideration, all of which have been a hallmark of his previous texts on corruption and organized crime. The result is a must read book for anyone interested in the problem of union corruption and what to do about it.”—Industrial and Labor Relations Review 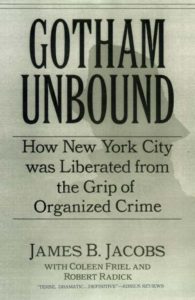 by James B. Jacobs , Coleen Friel and Robert Raddick

“Wherever Puzo’s bestsellers and Scorsese’s films are popular, this well-organized description of the extent of the Cosa Nostra control of six New York City industries and the government actions that broke down that control will appeal.”—Booklist 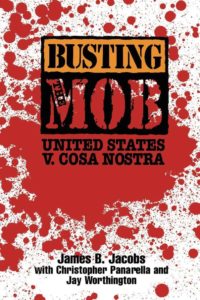 by James B. Jacobs

“John Gotti’s downfall is one of the five major criminal and civil cases cited in Busting the Mob which illustrate the grand strategy devised by the Federal Government to cripple, if not destroy, America’s entrenched Mafia groups. . . Jacobs believes it is premature to prepare an obituary for America’s Mob families.”—Times Literary Supplement

“Busting the Mob is a must read on organized crime for academics, prosecutors, and concerned citizens, in particular because it includes the text of primary material: indictments, trial testimony, etc.”—G. Robert Blakey, Professor, Notre Dame Law School, author of Rico, the federal anti-racketeering statue