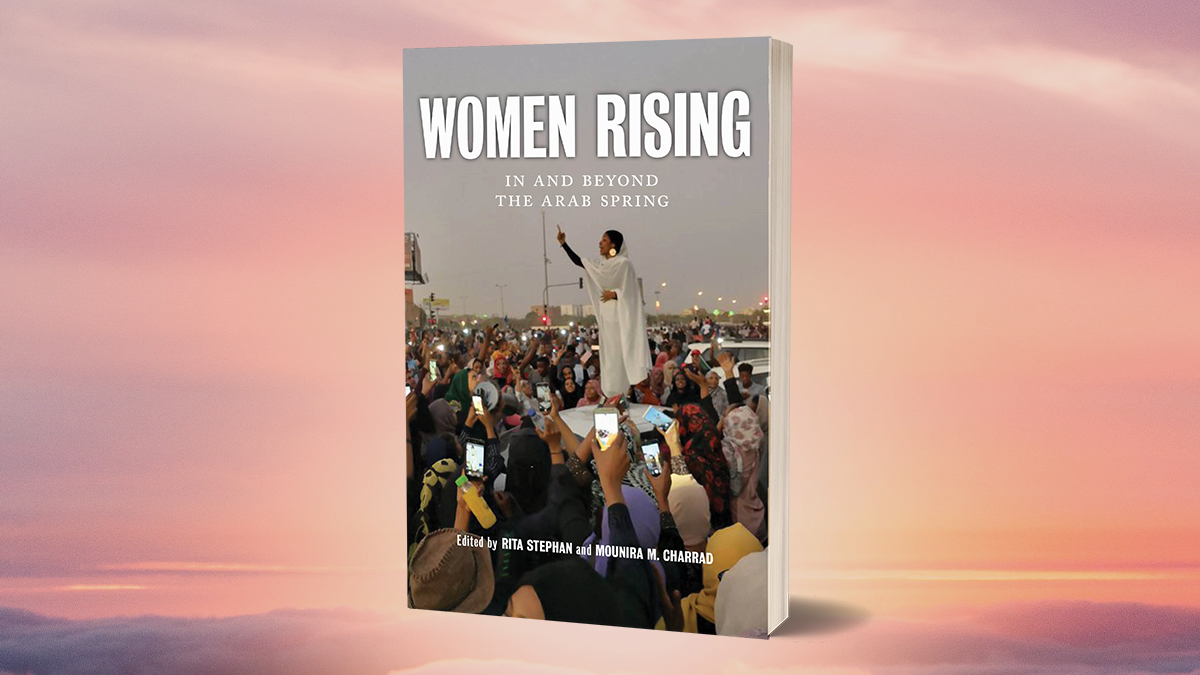 Women Rising is about women’s political resistance in sixteen countries before, during, and since the Arab Spring protests first began in 2011. This edited collection provides an insight into a diverse range of perspectives across the entire movement, focusing often on marginalized voices, including rural women, housewives, students, and artists. The forty chapters reflect questions posed by local, national, and transnational activists on the topics of beliefs, identity, agency, mobilization, and resistance.

Women Rising explores the multiplicity of contexts and spaces in which Arab women resisted. It also offers an empirical account of their agency and contributions to the Arab Spring. Theoretically, it rebukes Western, Transnational, and Third World feminist narratives that have stripped Arab women from their claim to feminism. It challenges the image of Arab women as lacking feminist consciousness and as “victims” or subordinate in their oppressive patriarchal Islamic settings. Instead, Women Rising offers an alternative perspective on Arab women’s agency. It argues that Arab women’s activists do not always have to “bargain with patriarchy” and that their agency is relevant to solving local and global social problems.

Women Rising engages three bodies of literature: Political sociology, social movements and feminism. Within the framework of political sociology, we look at the rupture in the political structure that allowed women and activists to take advantage of significant historical moments and exercise their agency to demand social and political change. Building on social movement theory, we explore how women mobilized by combining struggle for democracy with activism for gender equality, and how they sought to consolidate their gender identity and their identification with the nation. Themes such as sexual identity, sexuality, social status and class, religious beliefs, ethnosectarian backgrounds, and positionality as members of nonwestern societies are some of the intersections that inform our work and many of the chapters.

The Transnational feminism literature informs Women Rising as its contributors analyze gender inequality across nationality, sex, class, and race. However, any emphasis on a unified subaltern identity as existing among all victims of colonialism and imperialism is challenged.  While colonial powers are indeed oppressive, past and present, Arabs’ relations with them have been complicated, before and after the Arab Spring. Likewise, the literature on Third World feminism equally informs Women Rising. Despite sharing a colonial heritage with East Asia, Latin America and sub-Saharan Africa, Arab women’s experience is not typical of Third World. This body of literature, which is based mostly on the experience of East Asian, African, and Latin America women, assumes that, by extension, their struggles apply to Arab women. Women Rising rebukes this claim by exploring the economically, politically and socially hybrid geo-political context in which Arab women live and resist.

Our lens as feminist sociologists guided our decision to deliver the voices of activists, politicians, scholars, and many others. Instead of focusing on the hegemonic political narrative, Women Rising gives a platform for voices we rarely hear in revolutions, such as those of filmmakers, poets, students, and artists; as well as those who have been silenced, like rural women, queer feminists, and housewives. In their own voices, women give testimony on how their activism shaped the fight for democracy, liberty, and human rights. Similarly, this volume creates a space for multiple methodologies that include literary expression, street art, photographic discourse analysis, interviews, critical biography, testimonies, ethnographic interpretation, and political commentary.

Women Rising started with a call for paper. The submissions included a variety of authors and topics. We wanted to accommodate as many voices as possible, so we decided to limit the length of each chapter to less than 5000 words. The forty essays cover sixteen geographical contexts: Algeria, Bahrain, Egypt, Iraq, Jordan, Kuwait, Lebanon, Libya, Morocco, Palestine, Saudi Arabia, Sudan, Syria, Tunisia, Yemen, and even the Arab Diaspora. They combine analysis and testimony by authors from diverse communities in the region as well as Australia, Japan, Europe, and the United States. For the cover, we chose to represent the diversity of Arab women by including an image of the most recent, then, revolution in Sudan.

Though Women Rising speaks to scholars interested in Middle Eastern gender politics, we envisioned our readership to expand to the field of women’s movements throughout the world. We aim to reach readers who are concerned with understanding contemporary social and women’s movements.  As a textbook, it makes a great addition to lists of required and recommended readings in graduate and undergraduate courses on feminism, social movements, protests and revolutions, Middle Eastern studies, Middle Eastern women’s studies and the Arab Spring. More broadly, because of its highly accessible writing style, it appeals to a general readership as it offers an overview of Arab feminists’ contributions and struggles for democracy, liberation and human rights.

We aim for this volume, with women’s agency as its central focus, to give voice to Arab women as they tell their own stories of activism for democracy, human rights, and women’s rights. 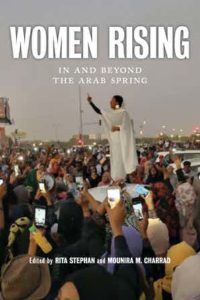 Rita Stephan is a Research Fellow at The Moise A. Khayrallah Center for Lebanese Diaspora Studies at North Carolina State University and the Director of the Middle East Partnership Initiative at the U.S. Department of State. She is the co-editor of In Line with the Divine: The Struggle for Gender Equality in Lebanon and the author of several publications on Lebanese women’s movement, social movements, social networks, and Arab-Americans. Mounira M. Charrad is Associate Professor of Sociology at the University of Texas, Austin and a Non-Resident Fellow at the Baker Institute, Rice University. She is author of the award-winning book, States and Women’s Rights: The Making of Postcolonial Tunisia, Algeria and Morocco, as well as the editor or co-editor of Patrimonial Power in the Modern World, Patrimonial Capitalism and Empire, Women’s Agency: Silences and Voices, and Femmes, Culture et Société au Maghreb. Together they are the co-editors of Women Rising: In and Beyond the Arab Spring, available from NYU Press.