[This article originally appeared in The Wall Street Journal online. Read it here.]

Warning: this essay contains spoilers from the film “Man of Steel.”

The reviews on the latest superhero blockbuster, “Man of Steel,” are in, and while generally positive, the movie has ignited a firestorm of debate among fans about the appropriateness of Superman’s actions—most notably, at the end of the climactic battle between Superman and the villainous Zod. Superman kills Zod with a quick snap of his neck. On his blog Thrillbent, prominent comic book writer Mark Waid (“Daredevil”) expresses his dismay at Superman’s actions describing them as a “total-fail moment.”

Waid refers to the widespread sentiment that what traditionally has made Superman heroic is that he “does not kill.” Waid’s post provoked a slew of comments including disagreement from some fans who justify Superman’s behavior as proportionate and necessary to restore social order in the wake of Zod’s attempt at mass genocide. From the reaction of some moviegoers, in our theater at least, the death scene was satisfying and elicited approving cheers.

Superheroes’ portrayed determinations about whether to kill villains and other characters along their paths to justice is a concept we call “deathworthiness” in our book Comic Book Crime: Truth, Justice, and the American Way (NYU Press, 2013).  Deathworthiness, a term borrowed from legal discourse about the death penalty, refers to the comic heroes’ self-described death penalty policy.

Comic book deathworthiness operates on a continuum from heroes who kill only the explicitly guilty to more extreme positions in which heroes will kill anyone, even innocents, encountered along the way. Notably, most contemporary comic books, though chock-full of bloodthirsty rhetoric and flashy fight scenes, most often end in villain incapacitation that falls short of death. Like the snapping of villain Maxwell Lord’s neck at the hands of Wonder Women in her “Wonder Woman #219,” when superheroes kill unexpectedly, fan controversy often ensues.

Our focus group research found that fan acceptance of a heroes’ depicted notion of deathworthiness hinges primarily on two factors: the seriousness of the threat (which, incidentally, in mainstream comic books nearly always reaches apocalyptic proportions rendering every situation one that is dire and requires drastic action), and the hero’s own personal, moral code.

At the extreme end of the deathworthiness continuum is the “Man of Steel” incarnation of Superman. Throughout his celebrated history, Superman almost never kills, with few exceptions. One of our focus group participants put it this way, “Superman is super-boring” because he has all the superhero powers imaginable and almost never engages in lethal violence.

Indeed, much of the discussion around Superman’s actions in “Man of Steel” points to his negligence toward innocents in Metropolis who presumably die as a result of his clash with Zod. For example, couldn’t Superman have easily taken the fight out to a desolate cornfield to avoid all that collateral damage?

Importantly, the “Man of Steel” debates reflect larger notions of justice in contemporary American society. Whether the threat is communism and the Cold War or terrorism in a post-9/11 context, discussions about deathworthiness prompt a re-examination of the concept of absolute power, the rule of law, and the difficulties balancing public safety with individual rights. To what extent should a hero go to protect public safety? And what is the significance when one of the most recognized cultural signifiers of the “American way” lethally revises his way of maintaining public safety?

The killing of Zod complicates the messianic nature of the Superman origin story—a story that Warner Bros. markets to Christian congregations through their Man of Steel Ministry Resource Site. If fans are rankled by the idea of Superman killing, devout Christians may similarly find it odd to equate Jesus, who preached peace and non-violence, with this Man of Steel who deems Zod deathworthy. Taken further, the aesthetic motif of “Man of Steel” borrows more from the dark, metallurgical violence in the “God of War” videogame than typical “no-kill” Superman comic books with their primary colors and emotive expressions. 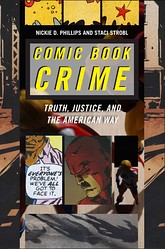 The decision to kill Zod was recognized as controversial by the creators themselves, who were reportedly initially uncomfortable with the killing but were convinced by the larger creative team at Warner Bros. If there was any question about whether Superman is still relevant in today’s world (and among fans, there most certainly was), the discussions around the film indicate a resounding yes — fans really do want to debate heroes and their depicted moral standards.

For us, the significance of “Man of Steel” is not whether it has earned its blockbuster status by being a “good” movie, but in how Superman’s actions spark debate about deathworthiness and in the process challenge our notions of when—if ever—vigilante violence is appropriate.

3 thoughts on “Should Superman kill?”