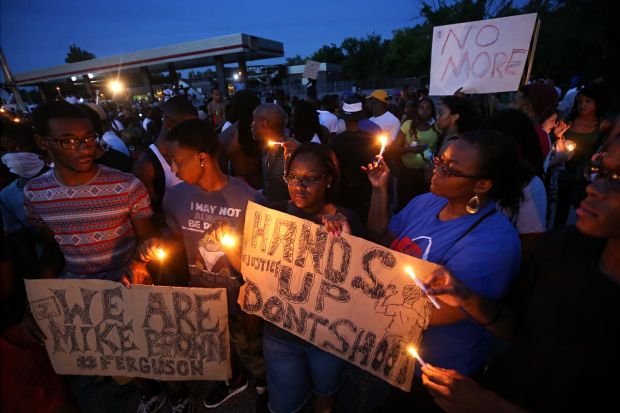 My first efforts to see the real time, on-the-ground happenings in Ferguson was on that day, the same day that alternative media streams temporarily went black. I visited Activist World News Now online for the live stream of Ferguson but I did not get a visual of that embattled community’s resolve; instead I heard it. From beyond the black screen I heard a voice leading a chant:Seven days after the murder of Black youth Michael Brown by police officer Darren Wilson in Ferguson, Missouri, state governor Jay Nixon instituted a citywide curfew between the hours of midnight and 5am. This effort to tame and remove from view those who continue to protest and rebel against the injustices suffered there and around the country was a part of a larger blackout designed to conceal the escalation of the militarized police state in Ferguson. This strategy on the part of the city’s police department included disabling streetlights and attacking and arresting journalists covering the story.

All: “…when the revolution come.”

All: “…when the revolution come.”

Unfortunately, the sounds emanating from Ferguson also showed me that times haven’t changed as much as some insist they have—at least not for African descended people in the U.S. The demands by protestors for alternatives to the frightening present are not new. Marcus Garvey, the inimitable leader of the Universal Negro Improvement Association (UNIA), argued a century ago for these futures that we still march for today. This truth is particularly devastating when one considers that one of his most famous speeches on Black violability was compelled by events that occurred 15 miles southeast of Ferguson.

In 1917, Garvey delivered a speech entitled “The Conspiracy of the East St. Louis Riots.” The bloody events of that massacre, which ensued just over the state line in western Illinois, began with a white mob who attacked the Black working class section of the city over perceived competition for employment. Their murderous nativism was so explosive that the Illinois National Guard was deployed. Garvey’s speech on the incident followed a large silent protest staged by the National Association for the Advancement of Colored People (NAACP) in New York City. Far from condoning this approach, Garvey argued that it was “no time for fine words, but a time to lift one’s voice against the savagery of a people who claim to be the dispensers of democracy.” He continued,

The litany of brutalities described here provide a genealogy of state-sanctioned violence that continues to its logical end in contemporary Ferguson, New York City, Los Angeles, Milwaukee, Atlanta, and countless other locations across the country. As in 1917, the National Guard has again been called to greater St. Louis. Black communities continue to be the laboratories for warfare, testing the efficacy of technology (Ferguson police have employed tanks, snipers, tear gas, and rubber bullets, to name but a few weapons) and enemy narratives that turn murder victims into easily disposable criminals. This is the status of our democracy.

I do not know what special meaning the people who slaughtered the Negroes of East. St. Louis have for democracy of which they are the custodians, but I do know that it has no literal meaning for me as used and applied by these same lawless people. America, that has been ringing the bells of the world, proclaiming to the nations and the peoples thereof that she has democracy to give to all … has herself no satisfaction to give 12,000,000 of her own citizens except the satisfaction of a farcical inquiry that will end where it begun, over the brutal murder of men, women and children for no other reason than that they are black people seeking an industrial chance in a country that they have labored for three hundred years to make great.[1]

Shana L. Redmond is Associate Professor of American Studies and Ethnicity at the University of Southern California. She is a former musician and labor organizer. Her book, Anthem: Social Movements and the Sound of Solidarity in the African Diaspora, is available now from NYU Press. Follow her on Twitter: @ShanaRedmond.

3 thoughts on ““Sounds familiar”: The revolution in #Ferguson”