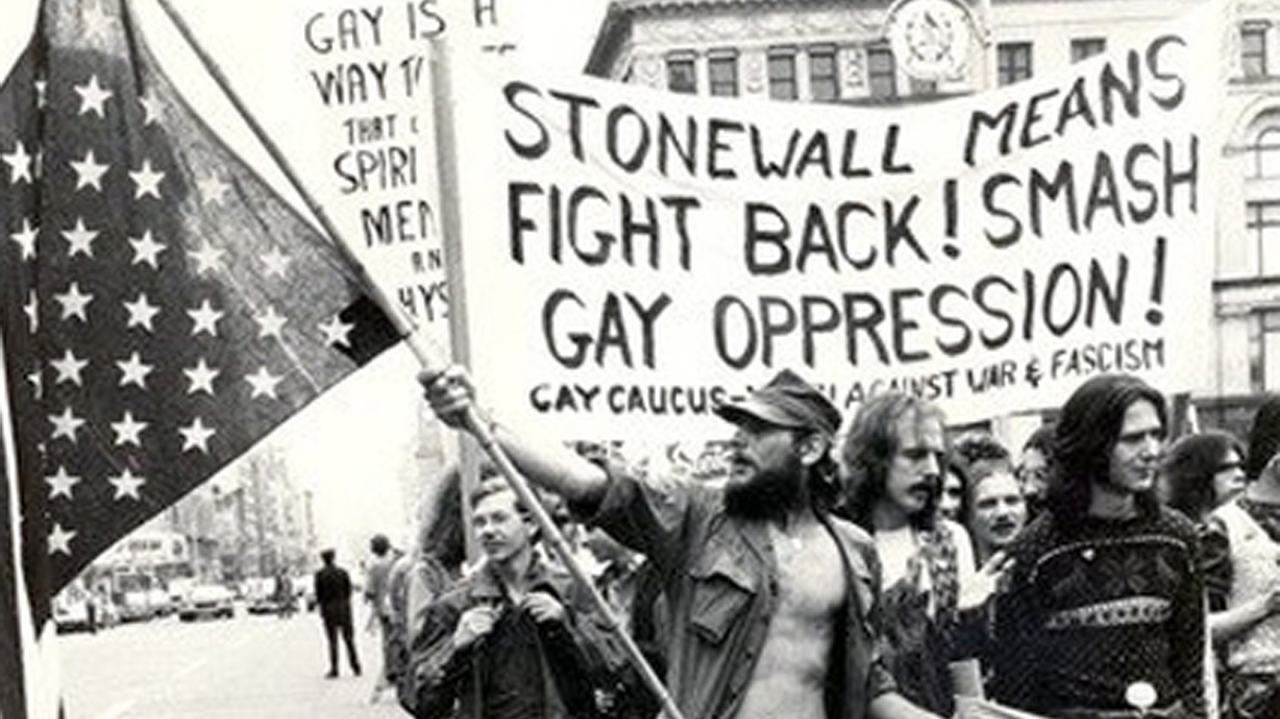 I’m feeling kind of blue, which seems somewhat perverse, since June is the month to be out and proud, with rainbow flags everywhere in New York City and headlines naming gay pride parades around the world. I’m a lesbian, and have happily announced that fact since I was seventeen years old. June 28 is the anniversary of the Stonewall Rebellion – in New York City, thousands march in the annual Pride Parade and millions join in as spectators. The club scene takes the party far into the early hours of the morning, a world of difference from the anger and frustration that blew up in front of the Stonewall Inn forty-eight years ago. The lives of many LGBT people are so much easier now, you’d think that I would be happy to enjoy festivities that celebrate lives stigmatized not so long ago as deviant and sick, when homo sex was both immoral and illegal. My prevailing mood is, nonetheless, melancholy. The festival of pride avoids too many unpleasant facts about the way we live now.­­

Moreover, pride is now an organizing principle evoked by other social movements. Disability rights activists have taken up the claim to pride as a part of the struggle for enabling resources and political recognition.  I have been living with paralysis and spinal cord injury since 2003, when I broke my neck. In those fourteen years I’ve learned a great deal from disability studies and disabled activists demanding justice for disabled people. Yet I’ve not been able to give over grieving the body I had been for half a century, and have come to believe that carrying my lost body with me in memory allows me to see more clearly who I now am. “Loss is inseparable from what remains,” David Eng and David Kazanjian write in their book, Loss: the Politics of Mourning.

Mourning is not a progressive affect, with stages that will pass, one by one. We are not all headed in the same direction, on the same clock. Time does not heal all wounds. I think that we might do well to stay with grief as a way to honor what is gone and attend carefully to the losses that necessarily shape what is to come.

While the move to disability pride is said to build on the claims of gay pride, the interactions among movements are more complicated than this timeline suggests.  Engagement across social movements and the sharing of what social theorists call “movement repertoires” is by no means simple. Melancholic attachments are unmoved by the passage of time, and rebuke the assumption that history is progressive, a linear extension from problems of the past to solutions in the future.

We seem to have forgotten that the gay liberation movement aspired to revolutionize sexuality. Given how deeply tied sexuality is to the modern sense of self, this revolution gave activists the opportunity to rethink kinship networks and caring communities, social bonds and sexual intimacies. I need not tell you how these revolutionary aspirations were quickly subsumed into the work of demanding civil rights – the right to marry, with all the advantages of matrimony, and the right to proudly serve in the military without fear of disgrace. The move from illicit sex to marriage, and from dishonorable discharge to promotion through the ranks, is a move from shame to pride. Some seem to believe that marriage and the military service finally give LGBT people a way to be normal, what we’ve longed for all long. I disagree…

I see real losses in the celebration of – and pride in – normalcy. Looking back to the flashpoint of the movement for gay liberation is instructive. The ones who fought back against the police are now actively forgotten, lost in the story of slow but progressive gain. In 1969, bars could not legally serve homosexuals alcohol, and cross-dressing was a crime. The Stonewall circumvented the first by incorporating as a private club with a cover charge, and patrons simply ignored those sanctions against “transvestitism.” Everybody knew that the “club” was owned by organized crime, and respectable homosexuals drank elsewhere. The Stonewall was known for its three dollar cover, dirty glasses, and watered-down drinks. It was also the refuge of homeless gay youth who lived in the park across the street, scrounged for the cover charge during the day, and sheltered in the bar at night, returning to the street at closing time.

Historical accounts of Friday night, June 27, vary, but it is clear this disreputable clientele refused to be cowed by the police who showed up on one of their periodic raids against vice, and they are the ones who started throwing at the cops first epithets, then pennies, and then rocks. This resistance drove the police back into the club they were trying to shut down. Reinforcements from the tactical squad showed up, but the riot was followed by a week of unrest, with thousands in the streets every night, trash fires, and spontaneous demonstrations. A year later, the Christopher Street Liberation Day Committee organized the first march in New York City protesting the criminalization of homosexual sex, harassment by the police, exploitation by organized crime, and social disapprobation of homosexuality. The Christopher Street riot was transformed into the Stonewall Rebellion.

Gay liberation was first and foremost a struggle for sexual freedom, which joined other freedom struggles, including the Black power movement, women’s liberation and anti-colonial revolts, which were working to radically remake the world. Gay liberation created social bonds and supports that did not route all social goods through the family and urged collectivity against privatization. Pride was an effect of the struggle. Borrowing a phrase from the Black power movement, protesters chanted, “Say it loud, gay and proud/Say it loud, out and proud!” Fighting for liberation from oppressive social institutions created a new sense of collective purpose – and a new sense of self. This sense of possibility is what drew me so powerfully to the movement when I was young and the revolutionary hopefulness of sexual liberation remains with me still.

A half-century of civil rights gains has conferred on Stonewall a patina of normative remembrance. Only last year, President Obama transformed the scene of the riots into the Stonewall National Monument, which includes the building itself and the surrounding streets. In Sheridan Square Park where homeless kids once gathered, there are now realistically portioned and detailed statutes of two gay couples – two men standing together, one with his hand on the other’s shoulder, and two women seated, one with a hand resting on the other’s thigh. These figures are finished in a brilliant, bright white. The New York Department of Parks and recreation waxes poetic to explain that “[t]he result is specific, evocative, and understated, showing the public comfort and freedom to which the gay liberation movement aspired.”

I don’t think so. I see a whitewash job that effectively obscures the queens and kids who started all the trouble in the first place. Many, like the resolute activist Miss Major, were not white.* Most were poor, and some hustled for a living. Right now, nearly half of the homeless youth living in New York City are queer, some thrown out of their homes when parents discovered they are gay, some who leave intolerable harassment or flee sexual assault. Many depend on what Amber Hollibaugh has called “queer survival economies,” sharing food and shelter, information about social services, and tips about jobs in the cash economy or “in low-wage fields such as retail, health care, reception, child care and cleaning.” Transgender women of color are regularly subject to police harassment – except when they are featured as iconic drag queens on Pride publicity or on the floats of the Pride parade.

Remembering the history of Stonewall is a way to rearticulated pride with an ongoing struggle for sexual power and possibility, and to recall that pride can be a public feeling that affirms selfhood as part of something larger than self. Giving credit where credit is due tells a story of gay pride, yes, but pride as but an aspect of a movement for gay liberation, which is most importantly a movement for sexual freedom – that is, a movement toward ways of living that are not determined by marriage, which is, after all, a contract with the state. Not only is the state a regulatory institution, but this contract cannot promise liberation, given that both marriage and the nuclear family prove dangerous to many women and girls – not to mention to queer children and youth, some of whom end up on the streets of New York City.

Feeling blue won’t keep me from enjoying the stories I will hear from one of the aides whom Janet and I pay to help me with my injured body. She’s driving into New York to see the parade, then will take her handsome and charming self to the parties and the after parties. I’m looking forward to hearing all about it. That very real enjoyment will not, however, lift my melancholy sense of all that has been lost, and how those losses are inseparable from all we have gained. Looking backwards to remember the ones who’ve been actively forgotten may be the best way to honor their memory and enliven hope for more just and verdant world.

*See the three-minute animated short about Miss Major, The Personal Things, directed by Reina Gossett, with art by Micah Bazant and animation by Pamela Chavez. Produced by Reina Gossett, Hope Dector, and the Barnard Center for Research on Women. Released November 20, 2016.

Christina Crosby is a Professor of English and Feminist, Gender, and Sexuality Studies at Wesleyan University. She is the author of A Body, Undone: Living On After Great Pain (NYU Press, 2016) and The Ends of History: Victorians and the ‘Woman Question’ (1991) and has published essays and reviews in Victorian Studies, PMLA, College English, and elsewhere.