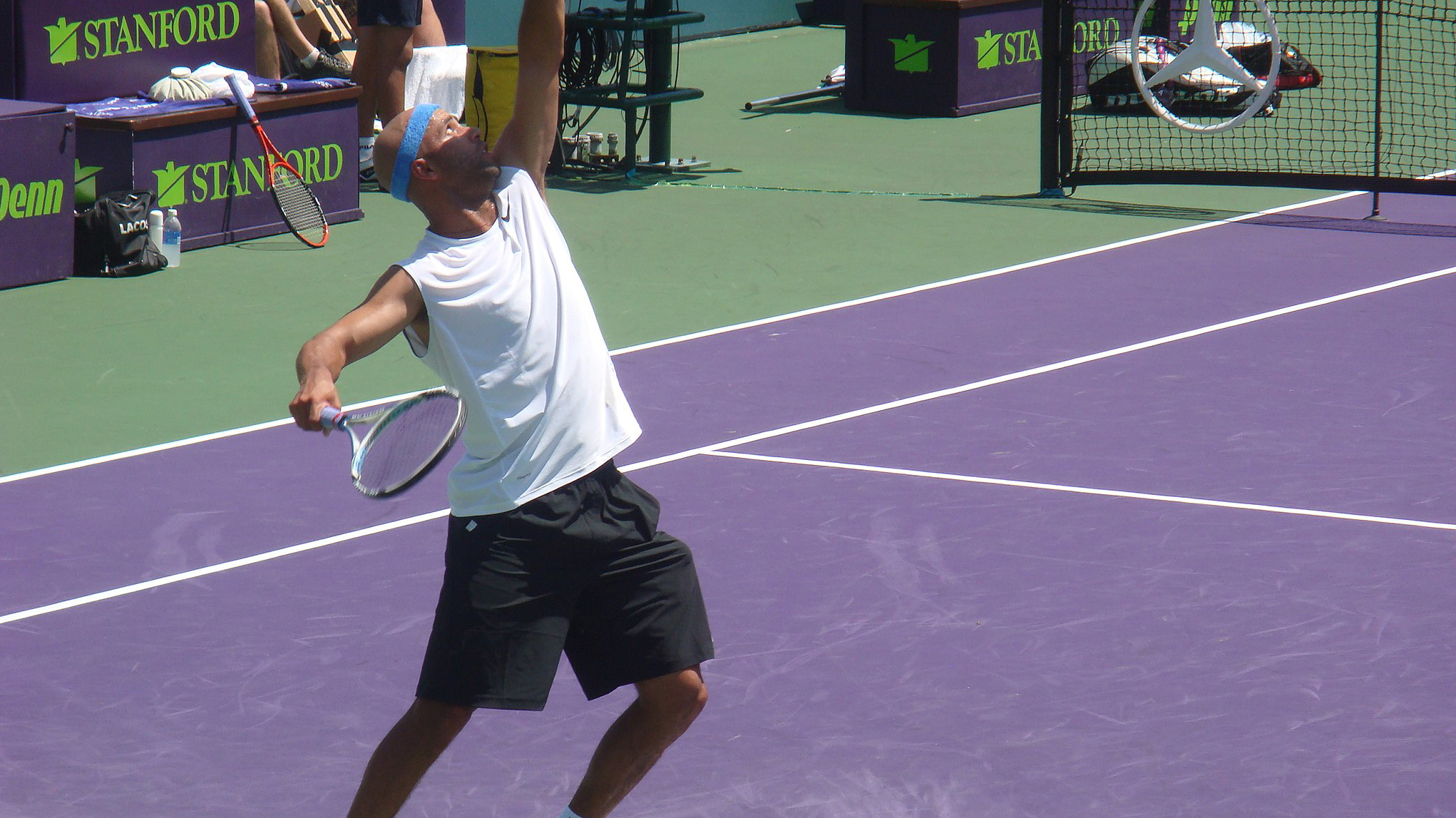 High energy infiltrated every thread of this boxing match.  After the fight, with crowds already emotionally charged, things quickly went haywire and shots were heard. Las Vegas police rushed in to bring the situation to order, and in the process, tackled, threw down, and pistol-whipped Michael Bennett, a 31 year-old, 6’4”, 274 pound defensive end for the National Football League’s Seattle Seahawks. Yes, the police knocked down the all-star, super bowl champion and had the defensive end thinking about his life as it teetered a fine line between life and death.

While acts of anti-blackness and black death have become common and brought to center stage in public discourse, there is little discussion about black masculinity, sport, and the relation to such state violence. I want to rethink the discourse of meritocracy co-opted by mainstream sport narratives that fails to account for the larger societal violence that also infiltrates the lives of black athletes.  Sport is not “post-racial” and neither is our society.  Rather, the acts of violence against world-renowned black athletes is, rather, proof of the far-reaching effects of anti-black racism.  The incredible amounts of money that professional athletes make, including African American athletes, often becomes the dismissing factor to the struggles of black athletes in and out of sport.  It is as if by making their money and having their full wallets that they could never be victims and should never have a voice; even fans and media pundits themselves determine black athletes should only “stick to sports.”  Sport does not free black athletes from anti-black violence. Rather, it reframes that violence as something in the past, something long ago, something that could never be in the present.  Last season, when former San Francisco 49ers quarter Colin Kaepernick knelt to demand social justice and challenge the anti-black violence of the police, Bennett, along with a few other NFL players were on-going supporters.

In fact, we have already had numerous incidents where black athletes, both African American and international black athletes, have personally experienced the racial profiling of and violence towards black communities.  In 2015, former African American tennis star James Blake was assaulted by a New York City police officer outside of his hotel because he “fit the description” of a perpetrator.  His blackness was all that had to be said and his presence near a high-class hotel was enough reason for suspicion.

Thabo Sefolosha was part of the high-octane, playoff bound National Basketball Association’s Atlanta Hawks.  Sefolosha, an Afro-Swiss player, was at a Manhattan nightclub after party in NYC in spring 2015. While there were tense moments in the NYC area as another NBA player was recently stabbed, Sefolosha was asked to clear the street by the police handling the matter near this party club district.  When Sefolosha inquired further, he was forcefully thrown down and his leg was shattered.  With such a gruesome injury, Sefolosha could not play in the playoffs.  His international standing, his light skin, and his fame in the NBA did not shield or buffer him from the police attack. His white international teammate, Pero Antic, was not physically assaulted.

These examples show us that sport participation and stardom do not provide reprieve from larger societal, racist violence.  Rather, I would argue that it is the same racial logic that projects African Americans as “natural” athletes that is also part of larger racist police violence.  Inhabiting sport and excelling at it is also the process by which black bodies are implicated as “dangerous persons” to be controlled.  The very body that is the spectacle and site of hero worship for many, also becomes indistinguishable in the larger social realm of the “dangerous” black male.  The athletic black body is not far removed, or removed at all, from the mainstream, institutionalized stereotypes of the dangerous, criminal black body.  In fact, it has been the very visibility, physicality, and size of the black body that so easily unnerves and excites white people and the police.  Additionally, for these professional athletes whose bodies are already exceptional through training and regimented ways of living, their very bodies betray their class status.  Rather, the hyper-visibility of their bodies brings a fame that is always structured through racial difference; their bodies and the meanings of blackness are never removed from their athletic success.

The very bodies that bring success on the sporting field stand out because of the sheer size, presence, and adorning racial meanings. Bennett, Blake, and Sefolosha are not contemporary exceptions to police violence or white public anxiety. In fact, we find a much longer historical trajectory. As historian Kevin Mumford shows us in Interzones (Columbia University Press, 1997), in early U.S. boxing history, black pugilist Jack Johnson’s success brought great pleasure to African American communities while it heightened the anxieties of the white public and the white nation.  His dominance in the boxing ring did not translate into greater freedom in the American public.  Rather, his body became a site of all kinds of surveillance and heightened racial fears.  Thus, in the contemporary period, we must think about how athletic excellence and the training of the black sporting body is never free from the larger violence.  In fact, I am arguing a synergy between these two realms by blurring this distinction.

I believe that the fear of the black sporting body is transferred from one of danger to one of temporary pleasure.  As such, these pleasures and desires are always fleeting, but juxtaposed in relation to fear that always lurks behind the sporting spectacle. During my research on South Asian American basketball cultures in the U.S., with a focus on Atlanta (Desi Hoop Dreams: Pickup Basketball and the Making of Asian American Masculinity, New York University Press), I noticed time and time again the kinds of fears that emerged in basketball spaces with the presence of an African American athlete. Participants in these sporting cultures felt that the presence of black athletes was antithetical to their notions of the beautiful game.  They feared that African Americans were “naturally” gifted and not there because of their merit, even if the black athlete was the least skilled and least athletic person on the court.  Even when the athlete was a mixed-race Afro-South Asian, their presence was questioned in South Asian-only exclusive basketball leagues because their blackness outweighed their South Asian-ness.  In this case, the mixed-race athlete was seen as too black and this blackness stood outside the respectable boundaries of the game.  South Asian Americans did not work outside the historical projections of blackness as “out of bounds” and as “danger.”

Part of the reason for such racist stereotyping of African American and black athletes is because of how we construct and conceptualize sport.  Sport is seen as the site for the domestication of the dangerous black body, but that domestication is never seen as full and complete.  Since sport is limited by time, the black athletic body does not carry the world of sport with them.  This experience of police violence is particular to black athletes.  Professional athletes of all races and ethnic backgrounds have bodies that are exceptional when compared to the average human being. Otherwise their sporting excellence would be seen as commonplace.  Yet, within professional games, the hyper-visibility of the black male body, paired with his size and physicality temporarily holds back the racist violence that is always easily ignited when the black body is seen outside the sporting space.

The violence of some professional games further legitimates the racial stereotype of the black athlete.  Thus, Michael Bennett’s hard hits, tackles, and sacks, while celebrated on the football field, also problematically situate him as violent. The violence then becomes something to be expected. The sporting black body carries that “danger” that is also the site of excitement and fantasies.  However, the very fear and desire of the black sporting body seeps into public consciousness and becomes the medium for dealing with African American men in daily life.  When the sporting body is already seen as athletically exceptional, it also serves to normalize the respective state/police violence.  In response to these acts of violence, the police have justified their actions with racially inflected phrases such as “looked like the perpetrator,” “looked threatening,” and “matched the details.”

It is not my argument that athletes should get exceptional treatment. Rather, I believe these cases show the banality and commonplace instances of racism. The same phrases used by police to justify their aggressive treatment of black athletes corresponds with the same statements used to justify the murder of Mike Brown, Eric Garner, and Tamir Rice.  As we can see, the violence inflicted upon black boys and men is not exceptional and reaches bodies regardless of class, thereby erasing any possibility of exceptional status.  The blackness erases the class, gender, sexual, and ethnic differences within.

Anti-black violence and anti-black racism are expansive and sport needs to be rethought as a sanctuary and site of progressive politics. As athletes kneel, sit, or offer other forms of protest this year, we must not get stuck on empty rhetorical issues of “unity” and “divisiveness” (pushed forth by the white owners) but rather talk much more explicitly about racist violence that governs the lives of everyday African American people and superstar African American athletes.  What Colin Kaepernick set off last year was not an attack on the anthem and the flag, which have problematic symbolic elements that arose through imperialist and racist time. Rather, what Kaepernick asked us to think about was BlackLivesMatter by calling out the gruesome acts of anti-black violence by the police.  Thus, it becomes that much more important now than ever to forge alliances, build broader coalitions, and push against the white supremacist demands for black death, Muslim death, Latinx death, indigenous death, and refugee death.

At a moment in our history where the FBI and the Trump regime have listed BlackLivesMatter as a terrorist organization, it is imperative that we see how civil rights and human rights are being eroded through our political system.  If organizing for justice and life are condemned by our white supremacist political order, by not standing up/kneeling down with Michael Bennett and our activists we are giving up the struggle for our lives, our dignity, and our communities.  Political blackness must be highlighted as one of the key political pathways to justice and freedom from state violence.  These athletes have made clear the fact that race is part of their very existence and we must, therefore, see how race structures, not just sport but everyday life in the United States. BlackLivesMatter!

Stanley Thangaraj is an assistant professor of Anthropology at the City College of New York.  He is the author of Desi Hoop Dreams: Pickup Basketball and the Making of Asian American Masculinity (New York University Press, 2015) and the co-editor of Asian American Sporting Cultures (New York University Press, 2016) and Sport and South Asian Diasporas (Routledge, 2014).  He thanks Constancio R. Arnaldo, Jr. for his brilliant and gracious insights on this piece.

2 thoughts on “Danger and Desire: The Black Sporting Body”