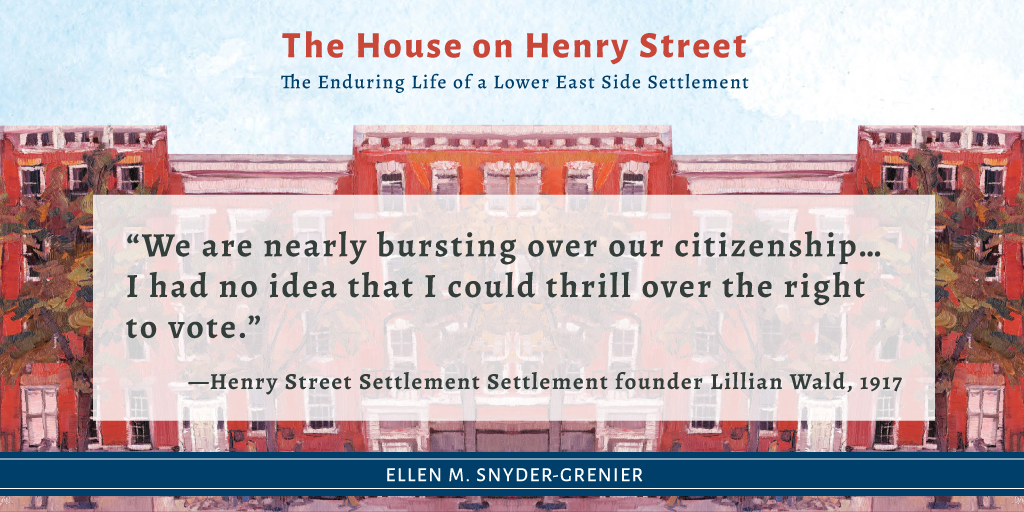 “In a country that is committed to [our] principle of government, there should be no intellectual question as to who has the right to be represented and who has not. Everybody has the right.”

A fervid believer in equality for all, Henry Street Settlement founder Lillian Wald believed women’s right to vote was an inalienable right, and worked with other reformers and activists to make it a reality.

As the push for women’s suffrage escalated, the fight for the ballot box became increasingly public. In 1913, when 10,000 protesters marched along Fifth Avenue—with half a million spectators crowding the sidewalks to watch—the Settlement was there. It was classic Henry Street: bold, diverse, and inclusive.

The Settlement’s contingent was hard to miss. Nurses and their immigrant neighbors of the Lower East Side marched side by side behind a large settlement banner, adorned with Henry Street’s original logo: the Chinese character Bao, which Wald used to evoke the idea of universal sister- and brotherhood. Many in the group carried flags emblazoned with the demand for suffrage—in 10 languages. “The cosmopolitanism of our district,” noted Wald, “was marked by the Sephardic Jewish girl who bore aloft the Turkish appeal. The Chinese banner was made by a Chinese physician and a Chinese missionary.”

Today, 100 years after the 19th Amendment to the Constitution gave women the vote, Henry Street, continues to fight for the right of all citizens to be represented—whether hosting voter registration or taking the push for voting-by-mail to social media. For this vibrant social service agency, which today serves tens of thousands of New Yorkers in need, voice and choice continue to be at the heart of its values.

Ellen M. Snyder-Grenier is a national-award-winning curator and writer, and principal of REW & Co. She has directed research projects, developed physical and digital exhibitions, and written on the history of New York City—as well the urban centers of Newark and Philadelphia—with a focus on social justice. The author of an award-winning history of Brooklyn, Snyder-Grenier is a Fellow of the New York Academy of History. Her new book The House on Henry Street: The Enduring Life of a Lower East Side Settlement is available from NYU Press.