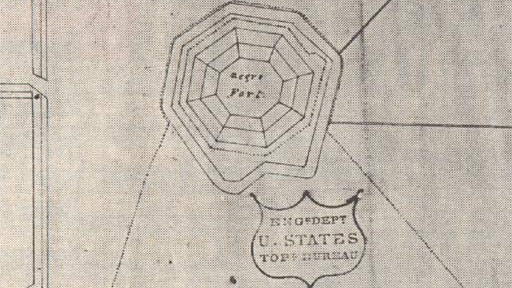 The new book The Battle of Negro Fort: The Rise And Fall Of A Fugitive Slave Community tells the dramatic story of the United States’ destruction of a free and independent community of fugitive slaves in Spanish Florida. To learn more about this fascinating story, we talked to author Matthew Clavin about the battle and its place in American history.

What was Negro Fort?

During the War of 1812, British military forces established a large defensive fortification on the eastern shore of the Apalachicola River in Spanish Florida. From here they recruited thousands of Native Americans and African Americans to join in the fight against the United States. Following the war’s conclusion, the British abandoned the fort and left it in the possession of several hundred fugitive slaves. For more than a year, this free black community, with the help of its Seminole, Creek, and Choctaw allies, survived independently under the leadership of black veterans of Britain’s Corps of Colonial Marines.

What was the impact of the battle that took place there?

The battle closed an escape valve that fugitive slaves across the United States’ southern frontier had utilized for generations. It also opened the door to the American republic’s conquest of Spanish Florida and its large indigenous population. The battle demonstrated in no uncertain terms the United States’ strong commitment to the expansion of slavery.

What inspired you to study this piece of history?

I am utterly fascinated by extraordinary examples of slave resistance that have for whatever reason failed to capture the public’s imagination. Though historians have long been familiar with Negro Fort’s history, the general public has not. I hope The Battle of Negro Fort will begin to change that.

What was the most surprising thing you found in your research?

Two things really stand out. First was the extent to which the reports from the frontier that Negro Fort posed a grave threat to the lives of frontier settlers were greatly exaggerated and in many cases completely fabricated. Negro Fort became a bugbear that American citizens, soldiers, and officials exploited to justify the United States’ expansion into Florida. Second was that prior to the Civil War Americans were quite familiar with the fort’s history. It was widely covered in popular books and pamphlets. Abolitionists especially kept its memory alive. I was not surprised to discover that John Brown studied Negro Fort and thought its short-lived success portended well for his plan to initiate a southern slave insurrection.

Why do you think this story has been mostly overlooked until now?

Spanish Florida’s history has always been overlooked because it falls outside the traditional narrative of United States history, and dramatic accounts of enslaved people resisting their American oppressors have also been ignored because they challenge the idea of American Exceptionalism. But today I imagine it has more to do with a growing disconnect between historians and the public. Professional historians too often produce scholarship that is inaccessible to students, teachers, and ordinary readers. Indeed, the argument could be made that in some circles the mark of sound scholarship is its inability to be understood by the general public. The point is that there are truly incredible stories of American history that readers would be taken with if only they were presented the information in interesting and informative ways.

Are there any traces left of the fort or its community?

There are. Though none of the wooden structures remain above ground, the massive moat that surrounded the entire fort complex is still plainly visible. Also visible are ground depressions that are believed to be where hundreds of the casualties of the Battle of Negro Fort were buried following the battle. Though closed temporarily due to damage caused by Hurricane Michael, the sight of the former fort is a National Historic Landmark known as Prospect Bluff Historic Sites. It is located in an incredibly beautiful and still isolated section of northwest Florida.

Unquestionably, it is the indomitable spirit of enslaved people. Even when an entire nation conspired against them, they continued to fight for freedom. That they benefitted from the assistance of British soldiers, Native Americans, and even American citizens, is also important to remember.

The possibilities are endless. Almost everything they need to know and teach about Negro Fort is hiding in plain sight. While a good amount of the primary research for The Battle of Negro Fort derives from hard-to-find sources in archives across the United States and the United Kingdom, much of it is readily available in published accounts, such as The Papers of Andrew Jackson. Moreover, many of the first-person accounts of Negro Fort are also available online in popular early nineteenth century newspapers and periodicals like Niles’ Weekly Register. I know from firsthand experience that students are excited to learn about Negro Fort and the lessons it teaches us about racism, slavery, and slave resistance.

How does the research you did for The Battle of Negro Fort lend itself to your next project?

When faced with a lifetime of servitude, many of Negro Fort’s residents chose “liberty or death.” It was a decision that many enslaved people made throughout the history of the early America. They took Patrick Henry’s words literally. Not surprisingly, then, the next project I am working on explores the ways in which the revolutionary rhetoric of the founding fathers both encouraged and justified slave resistance. 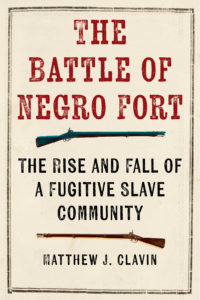 Matthew J. Clavin, Professor of History at the University of Houston, is the author of Aiming for Pensacola and Toussaint Louverture and the American Civil War. His latest book The Battle of Negro Fort: The Rise And Fall Of A Fugitive Slave Community is now available from NYU Press.