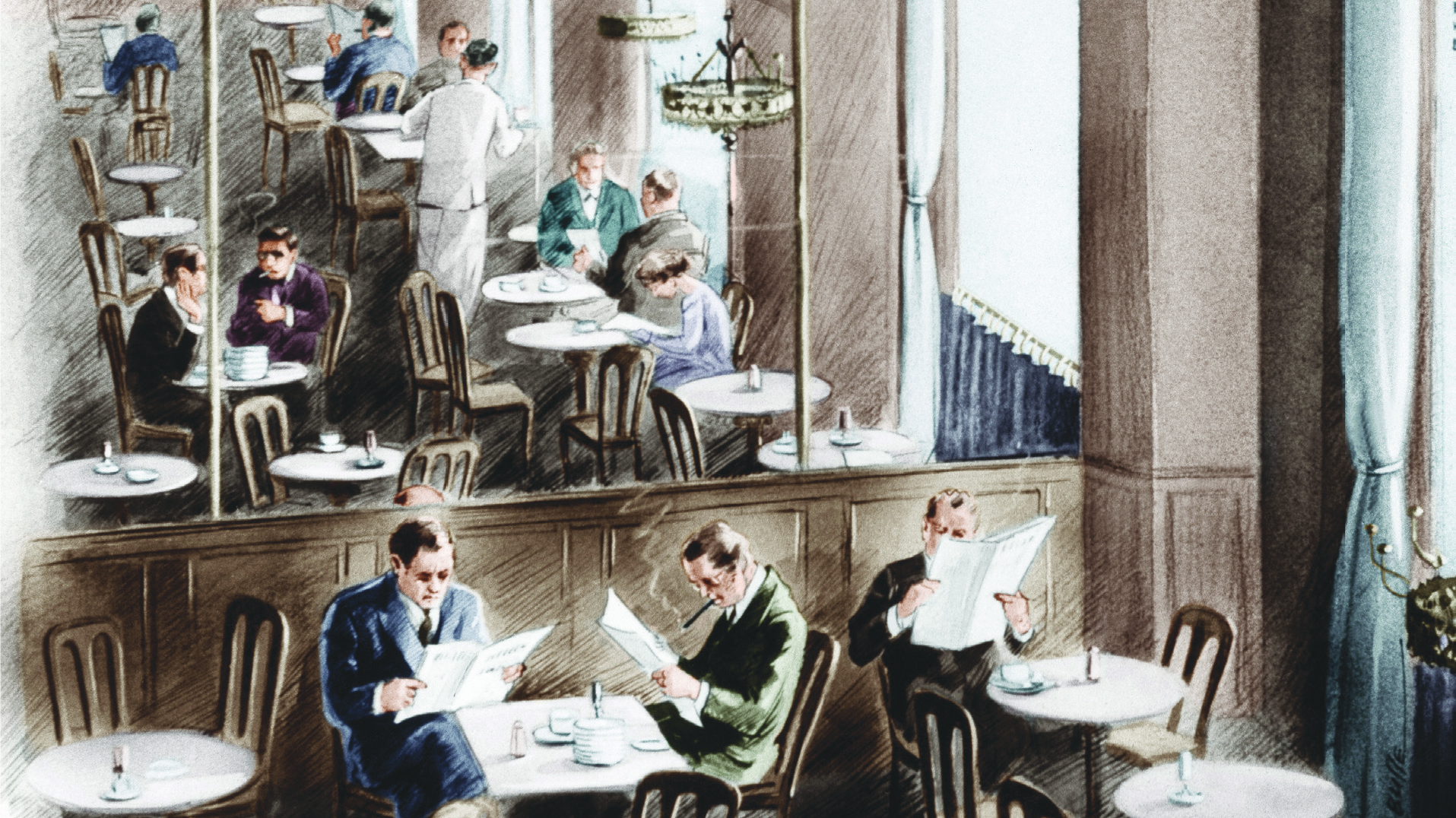 Coffeehouses are in the news now for all kinds of reasons. In the United States, the recent incident in which Rashon Nelson and Donte Robinson, two black men who arrived at a Starbucks Coffee in Philadelphia and were taken out in handcuffs for not ordering anything while awaiting their friend, ignited outrage and debate. The calls for boycotts and protests in the wake of the incident caused the huge chain to announce that it would shut down its U.S. stores for a day in order to train all of its employees in recognizing racial bias. Starbucks also announced that Nelson and Robinson will get free tuition at the Arizona State University Online program through the “Starbucks College Achievement Plan.” Meanwhile, in Israel, the closing of a number of well-known independent cafés in Tel Aviv over the last two years—places such as Café Tamar, Café Noah, and most recently, Baccio Café—has generated debate about the viability and future of coffeehouses and café culture in the city. These closings caused one commentator to declare that “the era of the Tel Aviv coffeehouse is drawing to a close. The new Tel Aviv is a city of food markets and culinary entrepreneurship, but not of coffeehouses.”

These seemingly unrelated happenings invite us to think about the nature of the coffeehouse as a business and a social and cultural institution with its own history, as well as about the role it fulfills in society. They open up questions such as: Who is welcome (or not) in the space of the café?  Is the coffeehouse really a public space open to all, or only to some? How do these institutions create a balance between being a profitable business and fostering a sense of community and creativity? What causes some of these institutions to flourish and others to fail? In order to answer these questions, we must think about the coffeehouse as social space more than just a place to consume coffee or tea. At the same time, we should be aware of the complexities and tensions that always surrounded this institution.

The theorist Jurgen Habermas used the example of the coffeehouse as a prime example of what he called “the public sphere,” where private people come together as public. The sociologist Ray Oldenburg coined the term “third place” to describe institutions like coffeehouses, which are outside work and home, where people could exchange ideas and build communities. Habermas, Oldenberg, and other scholars who have studied the coffeehouse know that its history goes back to the Islamic Middle East, where it flourished in the sixteenth century. It was imported from the Ottoman Empire to London and Oxford in the 1650s by Sephardic Jews, Armenians, Greeks, and Turks, and spread quickly throughout most European cities in the eighteenth and nineteenth centuries. These coffeehouses were alluring places to consume the new exotic and invigorating drink, but they were also, at least in theory, public spaces open to all. The English coffeehouses were known as “Penny Universities,” since anyone who could afford the measly one-penny entrance fee would have access to the newspapers that were available there and could participate in the discussions and debates about the news of the day, thus acquiring a wealth of knowledge that would otherwise be open only to the most privileged people in society.

The alleged openness and accessibility of the coffeehouse were the main reasons for its attractiveness to Jews, a religious and ethnic minority in Europe and beyond. With the advent of modernity, migration, secularization, and urbanization, Jews moved to large cities, and were integrating and acculturating into the surrounding societies. However, most Jews were not welcome in exclusive places such as clubs, and did not feel comfortable in taverns and wine houses where alcohol was at the center. The coffeehouse was an alternative. Thus, Jews became owners of coffeehouses, they frequented them, and sometimes became their most enthusiastic patrons. One famous café habitué, the Jewish writer Stefan Zweig, described the Viennese coffeehouse before World War II as a “democratic club, open to everyone for the price of a cheap cup of coffee, where every guest can sit for hours with this little offering, to talk, write, play cards, receive post, and above all consume an unlimited number of newspapers and journals.”

But even in fin de siècle Vienna, things were not so simple. By that time, Jews had become identified with coffeehouses and café culture to such an extent that there was a maxim in Vienna that “the Jew belongs in the coffeehouse.” But what does it mean to “belong” in the coffeehouse? For some, it meant that the coffeehouse was a neutral ground that opened new opportunities; for others it was a place of refuge from a hostile and alien world outside. Yet the café, in spite of fostering creativity and debate, rarely lived up to the expectations that it would be open to all. It was mostly a masculine space, where women could be servers or owners, but rarely the regulars who were at the heart of its cultural activity. Famous cafés were often very different from the “penny university,” and attracted mostly people who could afford the increasingly high prices of coffee and food. In most coffeehouses, there was an unwritten, yet clear hierarchy of habitués, the “regulars” who belonged and were welcome there, and others who were less so.

It is difficult to explain what made some coffeehouses beloved and important as cultural institutions, and how they balanced this status with being a viable business. In some cases, coffeehouses capitalized on the fact that they attracted prominent cultural figures to draw in customers. But in 1913, Berlin, for example, Café Des Westens expelled the well-known “bohemian” poets, writers, and artists, people like the Jewish-German poet Else Lasker-Schüler, who “didn’t order enough.” We should also recognize that the story of the demise of the coffeehouse and café culture is a familiar one, and scholars like Habermas claimed that it already happened in the 19th century. My book, A Rich Brew: How Cafés Created Modern Jewish Culture, locates the significant change in the importance of cafés in the context of modern Jewish culture in the mid-20th century.

And yet, coffeehouses are still with us, although the nature of the institution, the space itself, and the activities taking place there have changed dramatically. In more than one way, the coffeehouse has always been, and continues to be (even in the age of Starbucks) a complex reflection of the society and culture around it.

Shachar M. Pinsker is Associate Professor of Hebrew Literature and Culture at the University of Michigan. He is the author of A Rich Brew: How Cafés Created Modern Jewish Culture (NYU Press, 2018) and Literary Passports: The Making of Modernist Hebrew Fiction in Europe.