A bit more than a century ago, the great French sociologist Emile Durkheim noted that committing suicide is patterned by the time of day, day of the week, and season of the year. He found that people do away with themselves during daytime more than at night; on weekdays more than on weekends; and during the summer most of all, and least of all in winter. Why? he asked. He hypothesized that it is during the times that people are out and about in public, when social interaction is densest, most frequent, and most intense, that they most often do away with themselves. To me, the observation seems ironic; it virtually defies common sense. How is it possible that sociability lends a shoulder to self-obliteration—which is, we all agree, the ultimate withdrawal from social life? As with suicide, crime bears a skewed relationship with temporality: It’s high on weekends and more likely at night; mostly it peaks during times of dense and intense sociality. Apparently, paradoxically, both good and bad things happen when people get together in substantial numbers.

When I conducted a study of sociability in Washington Square (NYU Press, 2018), I thought I’d keep an eye on Durkheim’s sociability proposition. I did some counting there, and I extrapolated from earlier studies of Central Park. No surprises as regards the weather; good weather draws out perambulators, bad weather discourages them from dropping by. On one chilly, gusty, rainy November day in Washington Square, no one was stationary, and the few that entered, scurried quickly to their destination. But I also found some wrinkles. One January day blanketed six to eight inches of snow on the ground, which, in the Square—surrounded as it is by tall buildings—created a kind of amphitheater where dozens of children squealed and cavorted with joy making snow angels, snow men, and ramps that slid into the fountain basin. It was all very festive; in a heavy snowfall, the big city becomes a village.

Contrary to Durkheim’s hypothesis, weekends attract the most visitors to public parks, weekdays the least. On Saturday and Sunday, Central Park draws roughly six hundred thousand-plus visitations, but on weekdays, in the neighborhood of 400,000. Again, we are not surprised. And visitors enter Central Park in the afternoons most, early mornings and early evenings, far less. Still, in Washington Square—as opposed to Central Park—lots and lots of people congregate at night. On warm summer nights, the visitor walks into a huge party, with thousands in attendance, with many more male-female dyads than single-gender duos. Many who congregate at that time are neighbors; all they have to do is walk out their front door.

All of this seems to turn topsy-turvy when we consider the impact of the Coronavirus. In a recent (April 13) New Yorker, Geoff Dyer opined about how our latest pandemic has influenced sociability. Evidence of the calamity is measured by the absence of the usual traces—that is, “streets devoid of traffic and crowds.” There are fewer of us in public, and those who are, tend to “maintain a suitable distance” from one another. Even when we celebrate—by cheering, whistling, and banging pots and pans at 7 PM—we do it in physical isolation. When my wife launched a Zoom-chat with three friends, four faces appeared on her screen. I wondered how many would pop up if a hundred—or a thousand—friends chatted simultaneously.

Contrary to the stereotype, New Yorkers are not only polite, they constitute a schmoozy bunch. Durkheim would have said we socialize a lot. Most especially, we talk. We talk as couples, as circles of friends, in bars, at parties, in classes, in crowds, at meetings, in parks. Lots and lots of talking.

On a bright, sunshiny weekday afternoon, fortified by a few commonsensical hypotheses and a home-improvised mask, I ventured into Washington Square and looked around. Sure enough, I noticed that the streets surrounding the park were virtually void of traffic.  On a typical fair-weather weekday, I’d usually count 800 visitors to the park, two thousand on weekends. The day I went out perhaps five weeks into the pandemic, I counted 215 people in the entire park. About six in ten were not wearing face-masks. In the fountain area where, in the past, I’d see between 250 and 300 people, on this day, there were 66. No acts put on a performance, for that would draw a dense crowd incapable of social distancing. All three of the playgrounds were completely deserted; one was cordoned off. An NYPD cruiser criss-crossed the Square, and a bright electronic message that scrolled across its rear window read: “Do yourself a Favor—Stay 6 Feet Apart.” For the most part, the advice went unheeded; most dyads ignored the safe social distance directive. It’s difficult and unnatural to gab at a distance, and even more difficult to do so through a face mask. I was approached by no marijuana sellers; I wondered where they took their business.

We have a long way to go before the pandemic rises to the level of the cinematic post-apocalyptic, escaped-virus epic, such as I Am Legend (2007), Quarantine (2008), or Contagion (2011). But still, like everyone else, I welcome the day when we have a completely effective vaccine. Meanwhile, we’re all holding our collective breath. 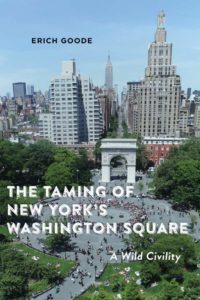 Erich Goode is Professor Emeritus of Sociology at Stony Brook University. He is the author of numerous books, including Drugs in American Society, Deviant Behavior, and The Taming of New York’s Washington Square, available from NYU Press.