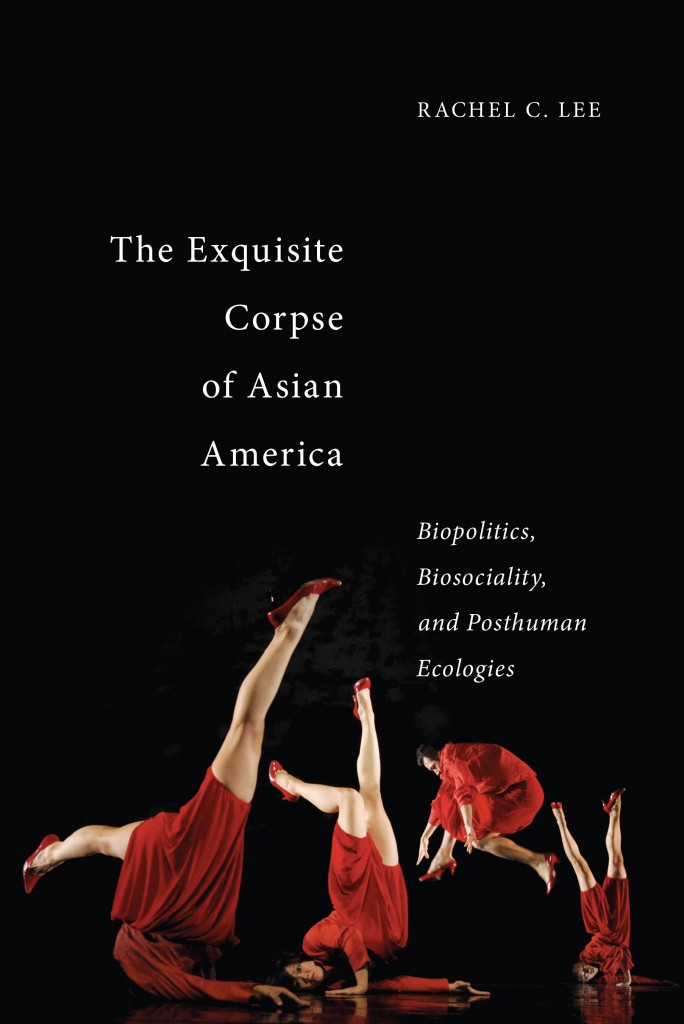 Last season, Faye Qiyu Lu, one of our fall interns and an undergraduate at NYU, put together a series of questions for Rachel C. Lee, author of The Exquisite Corpse of Asian America. Check out the Q&A on the book below!

What does the term “exquisite corpse” entail for your project?

Rachel C. Lee: The exquisite corpse, for me, is a structure for collaboration, an experimental method that values distributed sites of intelligence, despite the likely disjunctures of approach and worldview of various participants. In the early 2000s, I began working with a group of feminists in Los Angeles to create a critical-creative prose piece using the cadavre exquis as our model. That exercise led me to appreciate the conjunctive elements of scholarly endeavor, rather than simply to pretend that, for instance, a book emanates from a singular monastic researcher. At the same time, I had also been writing about performances, novels, science exhibits, and other cultural artifacts. All were concerned with racially marked populations and some used “body parts” in their compositions, for instance, wielding human detritus as art material or referring to fleshly organs in their titles. I discovered that these Asian American artists were not simply responding to how racial violence occurs through the assertion of anatomical difference between “colored” and “white” people—differences not simply in hair texture and skin color, but in diet, endurance, pain threshold, and so forth—they were also responding to the way in which biotechnology was changing Enlightenment notions about the integrity and autonomy of the human organism.

André Breton credited games like the cadavre exquis with bringing about something unexpected—a “pooling” of creativity and knowledge, perhaps an early intimation of what is now called “crowd sourcing.” That description seemed an apt figure, encapsulating the way my book had grown from an engagement with racial profiling tied to external features and body parts to an examination of such profiling in relation to risk assessments of populations based on genetic, metabolic, endocrinological, and environmental regulation.

It is argued in the book that a biosocial/biopolitical perspective would shed new light on the literary study of race (Asian American in this case). How did you first arrive at this approach?

The literature on biopolitics and biosociality—which I became familiar with through anthropologies and sociologies of medicine—helped me understand the gap between those who were studying embodiment on the scale of perception and corporeal dynamics and those who were studying it more sociologically, as properties and propensities of bodies aggregated into types. We can think of these as an approach that starts from inside a particular, situated body and an approach that starts from outside, looking over a crowd of bodies. As I explain in the first chapter of my book, literary artifacts often focalize their stories through the perspectives of individual protagonists.

In the case of canonical literature by racial subjects, readers who take up these books vicariously see from the viewpoint of these racially specific characters, taking on their speech inflections, and understanding or sympathizing with the traps of these characters’ own and others’ making. This approach corresponds to the anatomical-political register of biopower—how individual bodies feel the effects of (and partially defy) the managerial, biopolitical aspects of biopower codified in institutions such as the the legislature, the courts, the health clinic, the army, the Taylorized workplace, the credit and finance sector, and so forth. Public policy and the law necessarily address social problems–such as harm caused by institutional bias against racial others, the disabled, and sexual minorities, for instance–in terms of broad edicts aimed at ensuring classes of individuals are not singled out for unfair treatment. In other words, legal and policy discourses necessarily “abstract” individuals into populational patterns, but who wouldn’t feel that his/her individual instance of tragicomedy has not been heard in the broad edicts of these bureacracies? It is the desire to be in a particular body, or the riveting concreteness of a particular body’s story, that finds us looking to literature.

Apparently your study examines not only literature, but also various art forms. Is it pushing your own boundaries as a literary scholar?

Since the completion of my first book in 1999, I had been working on the difference between scripts treated as literary texts and live performances on the stage. Indeed, in my earlier work on standup comedienne Margaret Cho, the archived ‘text’ of a live performance was not a written transcript but a DVD. When working on performance, one pays attention not simply to the verbal emanations of the performer, but to the communicative and tonal qualities of gesticulating arms, crouched legs, pointed toes, sweat streaks, facial grimaces, costume, etc. I suppose you could say that I spent the first decade of the 2000s pushing my boundaries as a transdisciplinary scholar, not simply in terms of taking stage performances as part of my archive but also in my consideration of visual media and other forms of visual-tactile interfaces enabled by electronic platforms. Perhaps the biggest boundary I have recently pushed is that between bioscientific and humanistic approaches. However, here I am grateful to be following in the footsteps of brilliant feminist science and technology scholars such as Donna Haraway, Banu Subramaniam, Hannah Landecker, and Elizabeth Wilson.

The Exquisite Corpse of Asian America is also an experiment in various modes of critical writing. My introduction, first chapter, final chapter, and epilogue are all driven by argument and theory. There, I use examples from literature, scientific exhibit, clinical practice, and visual design and art in aggregate, as it were— meaning their force of evidence lies in the sum of their effect. In four chapters on the artists identified above, I ruminate at length on each artist’s corpus, dwelling in the minutiae of their choreographies, multi-media art practices, narrative structures, and pedagogical commitments. The goal is to draw out what ethical and political practices they accomplish—and urge us to accomplish—through their work. There are numerous ways in which the works of the four primary artists overlap and could be explored, but I didn’t want the length of the book to be too forbidding. For instance, while I expressly explore the boundaries among species—microorganisms and their insect and vertebrate hosts—through Amitav Ghosh’s fiction, I could also have turned to dancer Cheng-Chieh Yu, who has a series of dance performances devoted to the animal-human divide; these dances convey a sense that the movements of Chinese martial arts and the pharmacopeia of Chinese medicine acknowledge the continuity of humans and other animals. Similarly, both Margaret Cho and Denise Uyehara (both queer actresses) have recently turned to the topic of having babies; nonetheless, I felt Uyehara’s earlier work on disability and incarceration was far more pressing to address.

Lastly, you mentioned the hope to “provoke a new symbiont species of inquiry.” Would you consider The Exquisite Corpse of Asian America successful at doing so?

Immodestly, I’d love to say yes, but future readers will have to answer that question! Perhaps the best I can do is point to how biotechnology on a daily basis is disaggregating and reaggregating our body parts in ever new ways. Biotechnology now allows for something called the “three-parent embryo,” basically the altering of one’s offspring’s cellular materials, such as mitochondria, while maintaining that offspring’s genetic (nuclear DNA) tie to the parent. While the three-parent embryo is not a new species (all the parts combining are from one species), it nevertheless might do as a figure that is good to think with in our current moment. Such new combinations in and across bodies are coming into being because of well-funded infrastructures enabling their realization. My book aspires to be a more modest infrastructure, enabling analogous new inquisatorial combinations across bodies of disciplinary inquiry.

We might also take a cue from artists, poets, novelists, and standup comedians themselves, who are not leaving the social and ethical implications of these new technologies up to the biotech industry, but are speculating and imagining multiple futures emerging from these changes. Asian American Studies, race studies, literary studies, and American Studies, whether in a symbiont or three-parent embryo manner, would do well to amplify their engagements with bioscience in order to continue the work of critical race studies, social justice, and ethical pedagogy in relation to these developments.

Rachel C. Lee is Associate Professor of English and Gender Studies at UCLA. She is the author of The Americas of Asian American Literature: Gendered Fictions of Nation and Transnation, co-editor of the volume Asian America.Net: Ethnicity, Nationalism, and Cyberspace, and editor of the Routledge Companion to Asian American and Pacific Islander Literature and Culture.