With knowledge of self, there’s nothing I can’t solve
At 360 degrees I revolve
This is actual fact, it’s not an act, it’s been proven
Indeed and I proceed to make the crowd keep moving

These are the words of the great William Griffin, a mover of words and perhaps the true icon of the form and practice of hip hop. He was an emcee—also known as the God MC—whose job description stood for “master of ceremonies,” but whose purpose really meant: “move the crowd.” The point was to affect each other. Hip hop then is a mode of organizing. Of course, it may not fit into that traditional category, but perhaps it is time to abandon or rethink those categories. For hip hop emanates from a place that exceeds and precedes those traditions. If organizing makes us move, indeed makes us create movements, then hip hop is that and more. For hip hop became the literal grammar of a generation who then moved and made history in the late eighties and nineties.

Some of them chose a unique the location for their movement: the university. And in so doing, hip hop became a radicalizing force, responsible for bringing consciousness, but also a particular dream of freedom into existence, reanimating those spaces in real ways. It was both a response to particular set of conditions and the horizon of a world otherwise, hip hop was a mode and a method. Lyricism set the foreground to a rhythm, borrowed from earlier iterations of Black music that was oriented to a terrible present at the same time that it occasioned a future. It was poiesis—which is the art of creating something that has never existed before— in its the deepest sense. Rakim Allah was our seer. But he was one of many.

Hip hop narrated a particular kind of devastation. Deindustrialization was a neoliberal plan. Death was its cost of living. And Black people were marked for death through dispossession and urban renewal, unemployment, imprisonment, and other forms of disposal that attended the business cycle in the seventies and the eighties. The economy recovered, but neoliberal recovery never meant restoration for the vast majority of Black folk in this country and this world. The Reagan era occasioned a deepening of the pain. Market solutions to problems replaced the welfare state (which although it rarely worked efficiently for Black families, it was at least something). As the ghetto became increasingly unlivable, the music served as narration of Black life. By 1982, Grandmaster Flash’s “The Message” featured Melle Mel spitting the now iconic lines:

“Don’t push me, ‘cause I’m close to the edge
I’m trying not to lose my head
Ah-huh-huh-huh-huh
It’s like a jungle sometimes
It makes me wonder how I keep from going under…”

What is interesting is that though commentators often designate this as the origin of “conscious” or “message” rap, it came from a crew that was located in the party scene. Hip hop was joy in the face of the pain. It was dance music. It was play. It was beautiful. Even though the people who made it struggled.

And that too, was narration of a mood. That too, is a kind of political assertion. Increasingly, however, that mood would be expressed openly in the form of lyrical articulation. Whereas before the literal compositions—the looping and sampling, the beat—were the meaning and the message of hip hop, now words were becoming more crucial. The primacy of the emcee was upon us. By the mid-1980s this transition would reach maturity with acts like Boogie Down Productions and Eric B. and Rakim. But it was Public Enemy’s emergence that was profound and earth-shattering.

This “hip hop” generation now had its voice. But would it be enough? Some movement elders did not believe so. The university as site of this contestation provides the occasion for a story. In the autumn of 1987, a Black student conference convened by a group called the National Black Student Unity Congress—a formation that was modeled on the Student Nonviolent Coordinating Committee—took place at Howard University. Public Enemy had been invited to share a panel with elders in the Black Arts tradition, including Amiri Baraka, Mutabaruka, but also the musician James Mtume. There, a question was raised as to why groups like Public Enemy had not created movements, and the elders preceded to rake them over the coals. Baraka and Mutabaruka called them to task—they had a legacy to uphold, after all. But Mtume defended them. Speaking on behalf of Public Enemy was Bill Stephney who simply said, “we are musicians, not activists.” Also in the crowd was Lisa Williamson, soon to be known as Sister Souljah. And she defended the younger generation of whom she was representative. She had been involved in campus-based activism covering a range of issues, namely the anti-apartheid movement which had a particular strong influence on the hip hop generation. To her mind—this founder of the National African Youth Student Alliance—they were indeed carrying their load.

In the audience that day was Ras Baraka, the son of Amiri, and a Howard student. He had put together a group of students to run security for Public Enemy. The basis of that group was Howard students who were concerned about the apathy of their generation, about the legacy that they were bequeathed and appeared to be squandering, and who would meet to discuss this in the dorms. Hearing the critique his father and others had launched may have prompted Ras to consider alternatives to simply discussing the idea of apathy among his crew. Mere weeks later, together with students Carlisle Sealy and Charles Webb, this group of students moved their meetings to a larger venue on campus. But what would they call themselves? They wanted the word Black there to represent their identity, as well as the word nia to signify their purpose (its translation in Ki-Swahili). But what else? Solving this problem was a student who interestingly never returned. According to Ras Baraka:

“He had a whole thing about force being a vector that it had both direction and power and we were trying move the mass. That force equals mass times acceleration. And had a whole thing of what that meant. And that was we was gon’ build off of, what force meant. Force is mass times acceleration. Our job was to move the masses in the direction that we want them to move in. And everybody said, that’s what we was talking about. That moves.”

Black Nia F.O.R.C.E– a group that wanted to be a force to accelerate the masses—was born. It was time to move the crowd. At Howard University, and beyond. 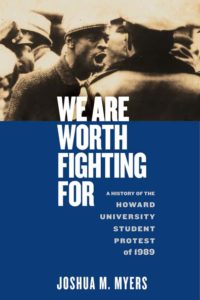 Joshua M. Myers teaches Africana Studies in the Department of Afro-American Studies at Howard University. He serves on the editorial board of The Compass and is editor of A Gathering Together: Literary Journal. He is the author of We Are Worth Fighting For: A History of the Howard University Student Protest of 1989, available from NYU Press.