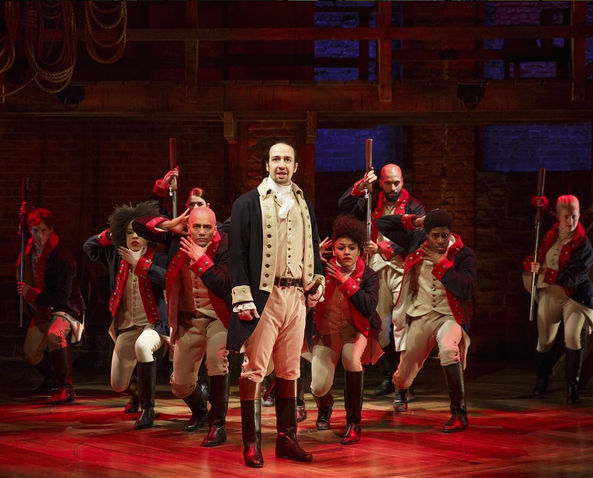 Hamilton is the hottest ticket on Broadway.  Anyone who’s been lucky enough to see it or hear it (here’s the soundtrack, for now) knows it’s thrilling.  But Founders Chic, the recent worshiping of our illustrious nation-building heroes, has little to do with its success.

Hamilton portrays the founders as strivers, especially immigrant Alexander Hamilton, who arrived from the Caribbean with almost nothing, and rose to marry one of the brightest (and wealthiest) women in New York, become George Washington’s right-hand man, one of the co-authors of The Federalist, the inventive first Secretary of the Treasury, and the central figure of the nation’s first major sex scandal, all before his death at age 49 in a duel by the hand of a longtime rival, the country’s sitting vice president. All promising dramatic material.

Nonetheless, Hamilton’s inventive lyrics, catchy melodies, non-stop references to contemporary culture, brilliant rhyme, fine dancing, top-notch singing, and dramatic talent are what make this show such a joy.  Those elements, far more than it’s being about a founding figure per se, is why Hamilton is a smash.

If there’s anything I’ve learned as an historian following Founders Chic, it’s that commercial productions that celebrate our founding generation work like any other content: they only succeed if they’re good and fit into the their medium snugly.  Sure, David McCullough’s John Adams book sold over a million copies—but McCullough is one of our grandest storytellers, author of a half-dozen other prize-winning best-sellers.  Mel Gibson’s entertaining The Patriot made money at the box office, while Al Pacino’s gritty but confusing Revolution was a dud.

The reason why Hamilton is so remarkable is not that the world has been craving a hip-hop rendition of the man on the $10 dollar bill.  The 1997 Broadway revival of the early 1970s musical 1776, which campily tells the story of the signing of the Declaration of Independence, limped through a year of lackluster attendance.  Other American political figures have fared worse: Bloody Bloody Andrew Jackson, a favorably-reviewed musical on the life of our seventh president, was a commercial failure five years ago.

Rather, Hamilton accomplishes what its best musical predecessors do, only a little differently: spin a strong story, with a marvelous book and hummable music, in the great Broadway tradition.  It re-energizes the form of the musical by injecting it with hip-hop.  Hamilton references previous such reinvigorations, including what the Berlin brothers and Cole Porter did with jazz, Leonard Bernstein did with classical music, and Bob Fosse did with the incorporation of new dances styles.  And if you listen to Hamilton’s soundtrack, you’ll hear a book that, hip hop references aside, would make any Stephen Sondheim aficionado smile knowingly.

Still, a musical bio about a nobody who marries well and entrances a nation, that’s new, right?  Not if you’ve seen Evita, about Eva Peron.  Hamilton’s creator, Lin-Manuel Miranda, credits the mind behind that musical, Andrew Lloyd Weber, as one of his major influences.  And Hamilton goes further back than that: it includes nods to the 20th-century American team of Rodgers and Hammerstein, and even to Gilbert and Sullivan, the late-19th-century British opera-writing duo who helped to meld opera and the popular stage.  It’s not American Revolutionary history that makes Hamilton rollicking fun: it’s Manuel’s melding of musical history.

One thought on “The Founders Chic of Hamilton”