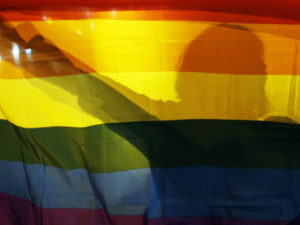 In the days since Obergefell v. Hodges and its rainbow celebration, I spent way too much time on Facebook reading through the voluminous posts and commentaries about how wonderful, awful, incomplete, conservative, progressive, lame, and historic is the Supreme Court’s decision.

Setting aside the more strident, ungenerous, overstated, patronizing, and self-serving of these—frankly, that eliminates a lot of them—these stocktaking discussions highlight several important, basic points. First, marriage equality symbolically and legally marks the end of outsider status for many within gay movements, and that is both an uneasy and vexed transition. Second, there’s a whole lot more work to be done, both in terms of completing the equalization of rights and the broader work of social justice and institutional change; beware of what Michelangelo Signorile has called “victory blindness.” Third, the fact that the Supreme Court ruled favorably towards marriage equality, and that public opinion, pop culture, and big business have shifted so favorably towards gay rights in recent years, stands in stark, telling juxtaposition to the heightened attacks on black Americans and the rollback of reproductive rights.

Clearly, the Supreme Court’s marriage equality decision marks a turning point for the LGBT movement—or rather, for the diverse, messy array of efforts and organizations that fall under that rubric. The question now is what that movement will do in this moment of possibility. A lot of smart people have been thinking, writing, talking, and acting on that question, and the best I can do is to cull from them the intertwined principles that might guide the next stages in this vibrant, ass-kicking movement.

Formal equality is not enough. Activists such as Urvashi Vaid have for decades been pointing to the limits of pursuing a “state of virtual equality that would grant legal and formal equal rights to LGBT people but would not transform the institutions of society that repress sexual, racial, and gender difference.” If you needed a devastating reminder of legal equality’s insufficiency, you could get that by flipping from the breathless SCOTUS celebrations to Rev. Pinckney’s dead body being carried past the Confederate flag. Now that gay and lesbian virtual equality is now well within reach—legal scholar Nan Hunter predicts that the LGBT-rights movement “will seem banal in 20 years if not sooner”—LGBT movements can return to a more ambitious social justice agenda.

Do not close the doors. A few years ago, Vaid suggested the guiding movement principle of “Leave No Queer Behind,” and it’s a crucial one at this moment. One of the risks when some beneficiaries of a movement are invited into social institutions is that they will abandon those who remain by necessity or choice on the margins. Refusing to do so—refusing to betray or abandon those who aren’t easily assimilated or who don’t want to assimilate—may involve the movement, as historian Timothy Stewart-Winter points out, in challenging the institutions that have just invited some of us in.

Intersectionality is not just a theory. That sexuality is intertwined with race, class, gender, physical ability, age, and the like is often noted but has not deeply informed much of mainstream LGBT rights organizing. It should be impossible to see the attacks on black and brown bodies, for instance, as an issue separate from LGBT concerns, if only for the obvious reason that some of us are LGBT people of color. The fight for gay rights has advanced in part by deploying economic and racial privilege, and over time, Vaid asserts, LGBT organizations have moved away from their earlier intersectional roots; the movement has been “oddly complacent in its acceptance of racial, gender, and economic inequalities, and vocal only in its challenge to the conditions facing a white, middle-class conception of the ‘status queer.’” At this turning point moment, she has advocated, a “re-formed LGBT movement focused on social justice [must] commit itself to one truth: that not all LGBT people are white or well-off.”

Coalitions, coalitions, coalitions. All of these linked principles—seeing formal equality as a starting rather than end point, refusing to leave anyone behind, making intersectionality a core organizing principle—promote a renewed focus on building and strengthening coalitions. The movement itself has always been a coalition, of course, and a fragile one; this transitional moment offer an opportunity to recommit to a coalition of lesbian and gay and bisexual and transgender coalition. It’s also an opportunity to imagine and enact new progressive coalitions; some are already working on these coalitions, and others have long ties that can be renewed.

Until last week, these principles seemed right but like a bit of a lost cause. As sociologist Suzanna Danuta Walters puts it, the gay marriage fight, for all its practical and symbolic value, took up a lot of “bandwidth and sucked the air out of the potentially more capacious room of queer world-making.” Now, at this turning point, when energy can be redirected and different voices emboldened, they seem instead like hopeful possibilities. Whether the LGBT movement manages to, as Walters says, “pivot and recalibrate,” I can’t predict, but the principles for recalibration are certainly well articulated. We are in a big moment of maybe.

Joshua Gamson is Professor of Sociology at the University of San Francisco. He is the author of Modern Families: Stories of Extraordinary Journeys to Kinship (NYU Press, 2015). Follow him at @joshgamson.

[This article originally appeared on the Contexts blog, a publication of the American Sociological Association.]